Why am I getting shocked when my breaker and switch is off? 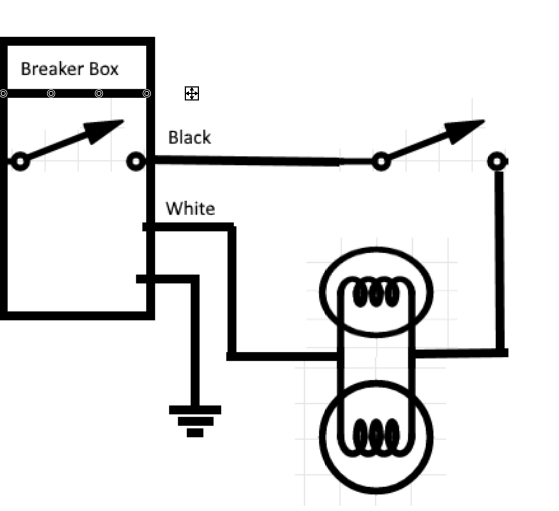 I've recently added power to an outbuilding and wired in a light circuit. While adding another light fixture, the wire broke at the fixture so I was rewiring it. With the switch and breaker off, as I was connecting the wires to the fixture, I was shocked. I measured before the shock and after, no voltage. It's happened several times while rewiring the same fixture. (added) Not sure if I touch neutral but definitely felt it on the hot wire.

Here's how I'm wired. Switch is switching hot line. The ground is not used as there is no connector for it (simple light bulb fixture). Lights are in parallel. Other light fixture has an LED light in it.

Why is this happening, and why is it intermittent?

I've attached a picture of the layout (sorry, it's pretty crude)

This is called a multi-wire branch circuit, common on US split-phase though it can occur on any multi-phase-with-neutral service. Multiple phases or poles share a neutral, the neutral carries only differential current. 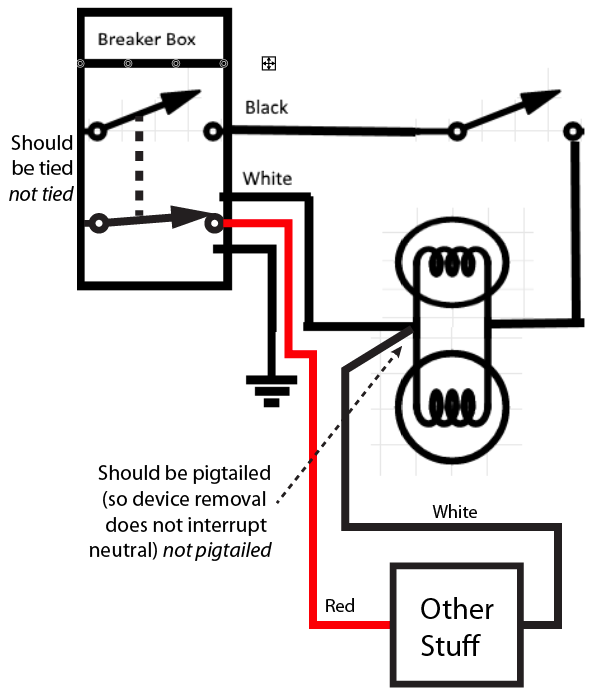 It has special rules and you see why.

It sounds like you have a neutral that is getting some voltage somewhere. That can be due to a break in the wiring somewhere else, or a weak connection like a loose wire nut or a loose connection at the breaker panel.

You said you measured the voltage but did not specify which wires you measured. Also you say the ground wire is not used for the fixture. But I infer that there is a ground wire there.

So I would suggest that you measure voltages on both hot and neutral against the ground. That will let you know where the shock voltage is coming in from.

You also said it is intermittent. That could mean the problem is between another switched fixture and the one where you are working; perhaps you get shocked when the other one is turned on. That would indicate that the neutral problem might be at or before the other switched light.

Had to say without the voltage measurements. So do them and repeat them with other switches turned on and off and see if you can localize the problem.

Not the answer you're looking for? Browse other questions tagged electrical wiring lighting light-fixture safety or ask your own question.

7
Getting shocked by a neutral wire

7
Why is my light switch leaking electricity?
7
Getting shocked by a neutral wire
2
Circuit breaker kicks off when one switch is on
0
Why does this switch trip the breaker?
9
Why am I getting shocked by a water heater?
1
How to Wire New 1 Way Switch From 2 Existing 3 Way Switches
1
Why would my GFCI breaker trip when I flip a switch?
0
breaker trips when switch is turned OFF
0
Added new light to circuit but it turns on when switch is off