What is this exterior wood finish?

We (our local athletic association) bought a pre-built building, but we had to relocate one of the doors. We replaced the panel with a matching piece, but we're not sure how to finish it so that it matches the rest of the building. I guess the manufacturer is no longer reachable (which doesn't give me a great feeling), so we're left to guessing. Any ideas? Original is the yellower material on the left side and the thin strip on the top by the green metal roofing. The new panel is on the right (paler color). 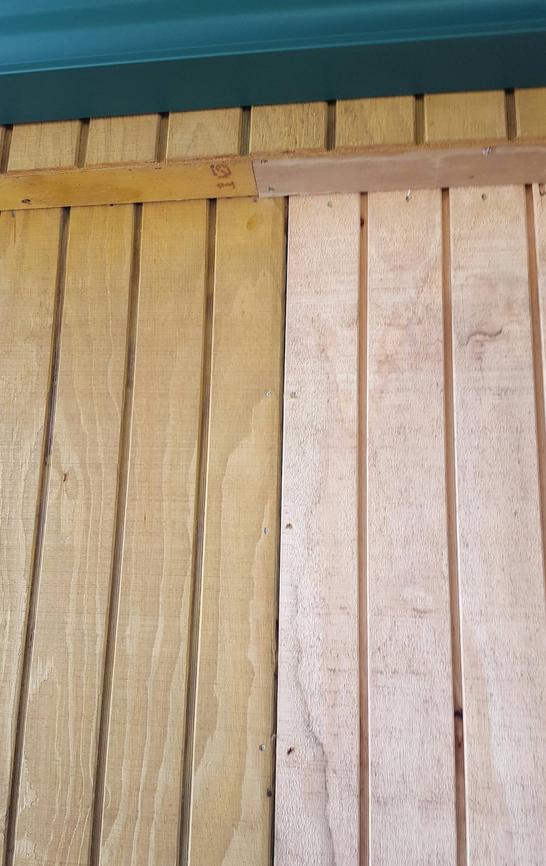 I would do the following, assuming you have some scraps from making the panel:

Print out the photo and take it, along with a small scrap, to your local store with outdoor paint stains. (big box, hardware, or paint store) and see if you can match the color. If you are lucky, a person there might be able to narrow down the choices based on the type of wood. Purchase a few of the smallest cans that might create the same results. On some of the scraps stain them with the different stains and let them dry. Compare them with the original stained piece. If they are not close enough, repeat the process.

If you still end up with differences, try getting it close and stain the new part of the door. Then apply a covering type stain over both the old and new.

It's resawn T-1-11 plywood exterior siding with 4" grooves. It comes in 4' x 8' sheets and 5/8" thickness (actual thickness is slightly thinner).

It is made of plywood veneers laid up in a 5-ply pattern and glued together. Then the top veneer is "resawn" to roughen the exposed face to give it a rustic appearance. Then grooves are cut into the face at 4" or 8" oc. to give it a "board" appearance.

It's made with shiplap edges (on the 8' side) so it can fit together to give it a uniform "board" appearance, but has a square edge top and bottom, (4' side) which usually has "Z" metal installed to flash the horizontal joints.

It's installed over a moisture barrier (building paper) because it leaks at the shiplap joints. The moisture barrier should be installed over a sub-sheathing, like 1/2" plywood, but some install it without the sheathing, (this is called "single-wall construction"). If you use single-wall construction, then studs should be 12" oc, (the net thickness of the siding is about 3/8" due to the grooves cut into it.) Otherwise it can be installed on studs at 16" oc or 24" oc with sub-sheathing.

It has a high failure rate because the grooves are cut into the second ply, which has gaps in it, which allows moisture to lay in the gaps and rot the inner plus.

It is still available. Contact your local lumberyard or the APA, American Plywood Association.

I think the stuff on the left is pressure-treated (impregnated with chemicals to deter insects and rot), while on the right is the same material, but not treated. But I can't guarantee that. Photos can do funny things to colors.

If that's the case, then there's not much you can do besides removing the new piece you just added, and replacing it with equivalent PT material.

Not the answer you're looking for? Browse other questions tagged exterior wood-finishing or ask your own question.

3
What type of wood for moist exterior location that is also paintable
0
Protecting a finished wood exterior door
2
Clear wood finish with minimal color/sheen change?
0
Solid stain on untreated exterior wood
0
How to finish wood stair treads?
1
Finish a laser engraved piece of wood
0
Water based clear protective finish coarse first coat
2
What is this plate on an exterior wall?
1
What kind of threshold for this door - inswing - exterior - concrete - dricore?
0
How do I get a finish on wood that's as bright as when the polyurethane is fresh?