How to patch this PVC elbow connection?

I bought a home about 3 months back, and recently discovered a slow leak under a wall in my utility room.

I ended up removing that part of the wall to get to it, and the leak is coming from the feed pipe from my well. This is the pipe that comes in from the outside.

The section in question is basically two elbows, and it leads to a diaphragm pump that ups the pressure inside the house.

Long term, I am going to hire a plumber to repair this. Short term, I need to get it fixed to stop the leak.

The leak is coming from where the elbow fits into the other pipe (picture below, it's on the left of the elbow). If you look closely you can see the elbow is a little bit smaller where it's coming out of the pipe. 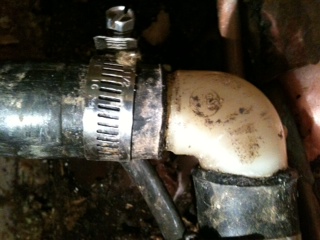 Whoever did this initially basically just got some hard rubber piping and hose clamps and crammed it all together. My problem now is, I can't get the elbow to go any further into that black piping (I obviously loosened the hose clamp). I even tried using a long vise on it, but it wouldn't go any deeper.

Since I have messed with it the leak has gotten noticeably worse, so I had to turn off the well to kill water to the house.

Is there some product or technique I can use to temporarily (say for a few weeks) seal this up? I really don't want to take all the pipes apart for this. It's already sort of jury-rigged so I'm afraid if I take it all apart I will need to just replace all the piping.

If the solution is something that needs to be reapplied say weekly that would be OK as well, as this is in a corner of the utility room and I plan to leave the wall open until we can get a pro to come in and fix it the right way.

Let me know if any other pics or info are needed.

You've already accepted, but to properly fix this:

I'll assume it's all polyethylene pipe (typically used for well piping). The fitting also looks like nylon, which in my experience is easy to damage and often leaks. I much prefer PVC (which is typically gray) or brass.

Take everything apart, remove the elbow, and throw it away. Heat the end of the poly pipe with a torch, both around the outside, and a tiny bit on the inside. You want it to be warm, but not melted/squishy/burning. Put on two clamps, then put the fitting in, and then tighten down the clamps (about 1/4" apart, give or take). Repeat with the other end.

If you've never done this, you may want to practice on some scrap pipe first, especially if you don't have a lot of extra to work with. If you do melt the pipe, you need to cut the end back and remove the melted piece.

You can try a fiberglass "pipe repair kit" available at most hardware stores. You soak the fiberglass in water which activates the resin, and then wrap it around the leaking pipes. It will completely encase the pipes and harden, leaving you with a pretty strong temporary fix. I've used this on PVC and copper with good results; I think it would work on rubber tubing but you might want to check the label.

Note that it probably won't be practical to remove the fiberglass later and fix what's underneath, so only try this if you're planning to completely replace that section of pipes/tubing.

Not the answer you're looking for? Browse other questions tagged plumbing repair pipe pvc or ask your own question.

1
Leaky pvc ball valve handle cap and pvc joint
1
Going from a PVC Sched 40 1-1/2" PIPE to a 1/2" Poly Combination Elbow
1
How much length of pipe is needed to use a 'donut' type PVC to iron pipe connection?
0
Is this a brass or copper elbow pipe under the sink?
1
Water leak at outside copper-PVC pipe connection
2
How to replace a leaking PVC elbow?
1
Repair leak in PVC elbow
2
What is this elbow joint pipe?