How do I divert rain water off of property?

My upper back yard sits on a slight hill. When it rains, water forms in holes like springs, and water continues to run down my driveway days after it has stop raining.

I just had a new driveway poured and the rust from the rain coming out of carport has damaged the newly poured concrete. The problem water has been going on for over 12yrs.

It's coming through the basement, which has a large concrete add-on slab in front of the basement. Water continues to get through even with a sump pump, and the window well get full even while there covered.

Common and relatively easy solutions tend to be done with a combination of french drains and drywells.

A french drain is a drainage system that helps prevent runoff past the drain line. For example 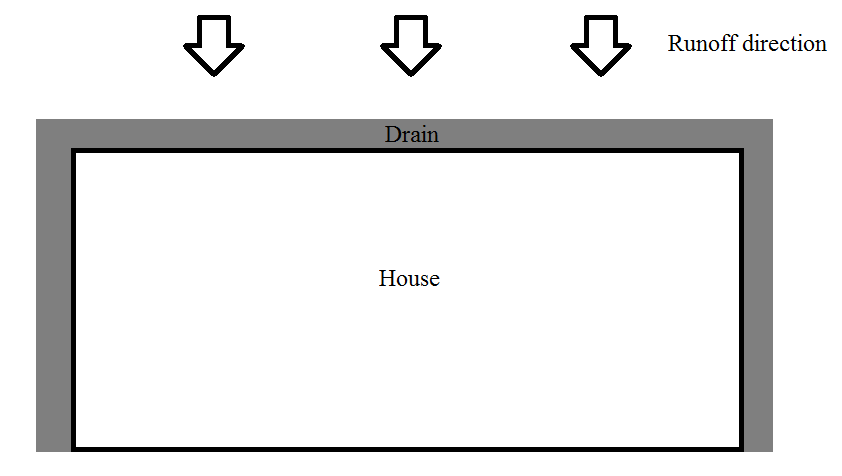 in this rather crude drawing, the top of the image is a higher elevation than the bottom. Water will form runoff going toward the house in the drawing. By putting a french drain along the uphill side, and running alongside the house, the drains intercept the runoff and channel it toward the outflows (which currently go into nothing, but don't do that).

French drains are basically trenches that contain perforated drain pipe under a layer of loosely-packed rock. You can see a drain cross-section here.

A drywell isn't strictly necessary if you can take the outflow ends of the drain and go directly to a storm drain or some place where you don't care about standing water (ex. a lake or pond), but there are also concerns with eutrophication when considering residential runoff, so make sure you are complying with local regulations if you decide to make your water someone else's problem.

A drywell, however, is an elegant way to store all that wonderful rainwater your drains just collected. 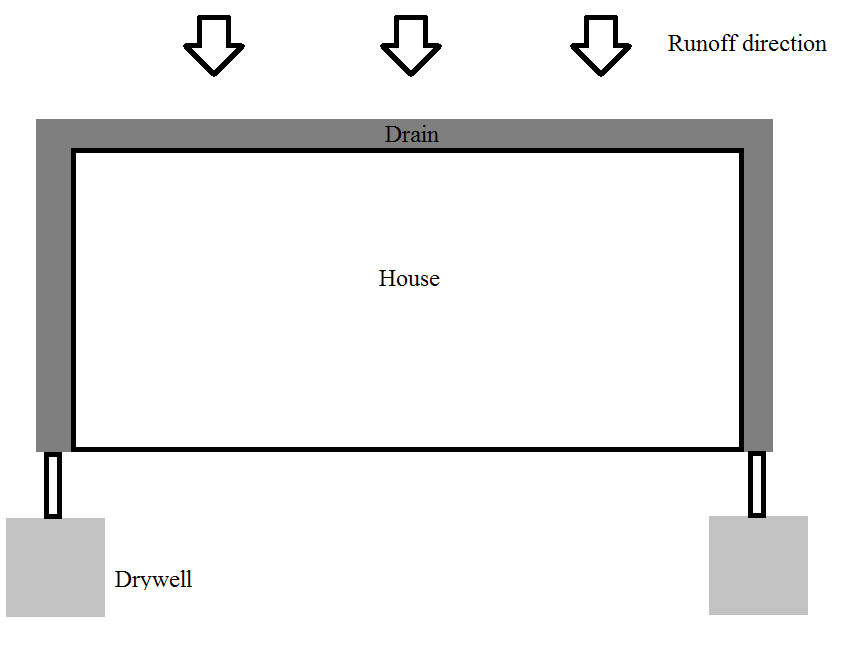 A drywell is basically the same as the drain, but instead of going somewhere, it doesn't. You don't want these too close to any structures, which is why it's drawn away from the house, but it needs to be connected to the drains (black connecting boxes). Those drain pipes can be simply buried without needing the gravel/rock trench to extend all the way from the drain trench to the drywell. This also allows you to place the drywell (almost) wherever you want, but a low-lying area is best.

A drywell can be made in a variety of ways to suit your aesthetic. You can get plastic tubs as a preformed well, you can just dig a hole and fill it with loosely-packed rocks, you could do something even more creative.

Of course, your situation (and mileage) may vary. Instead of an impermeable driveway, you could have installed a permeable driveway. Many of these act as drywells because of their construction. The aggregate bedding can store excess rainwater. You could also attempt to replace much of your soil with something that drains better, like sand as opposed to clay. That might even work into your landscaping plans, but could be much more complicated if not.

Ultimately, you're just trying to move water to a more convenient location. French drains and drywells tend to do that pretty well.

Not the answer you're looking for? Browse other questions tagged water basement drainage sump-pump driveway or ask your own question.

6
There is water in my basement and the outdoor sump pump failed. What am I doing wrong?
6
Driveway Gutter / Rain Guide?
0
How can I stop a water leak in my basement?
0
Use a sump pump for a low spot on driveway during El Nino?
1
Water in Basement - Help!
3
Water dripping from basement ceiling during heavy rain
0
Spring water in basement of new construction
1
Water seeps through basement floor at drain exit during heavy rain
2
Sump pump cycle