I'm currently in the planning phases for a new construction home that will be 3 stories without a basement (crawlspace instead). The home will have insulation in all interior walls which will make it harder to do future cable runs. I'm looking to see if running empty conduit is an economical choice for future proofing the home.

First Floor: all crawlspace and first floor low voltage would run to the coat closet to a panel in there. 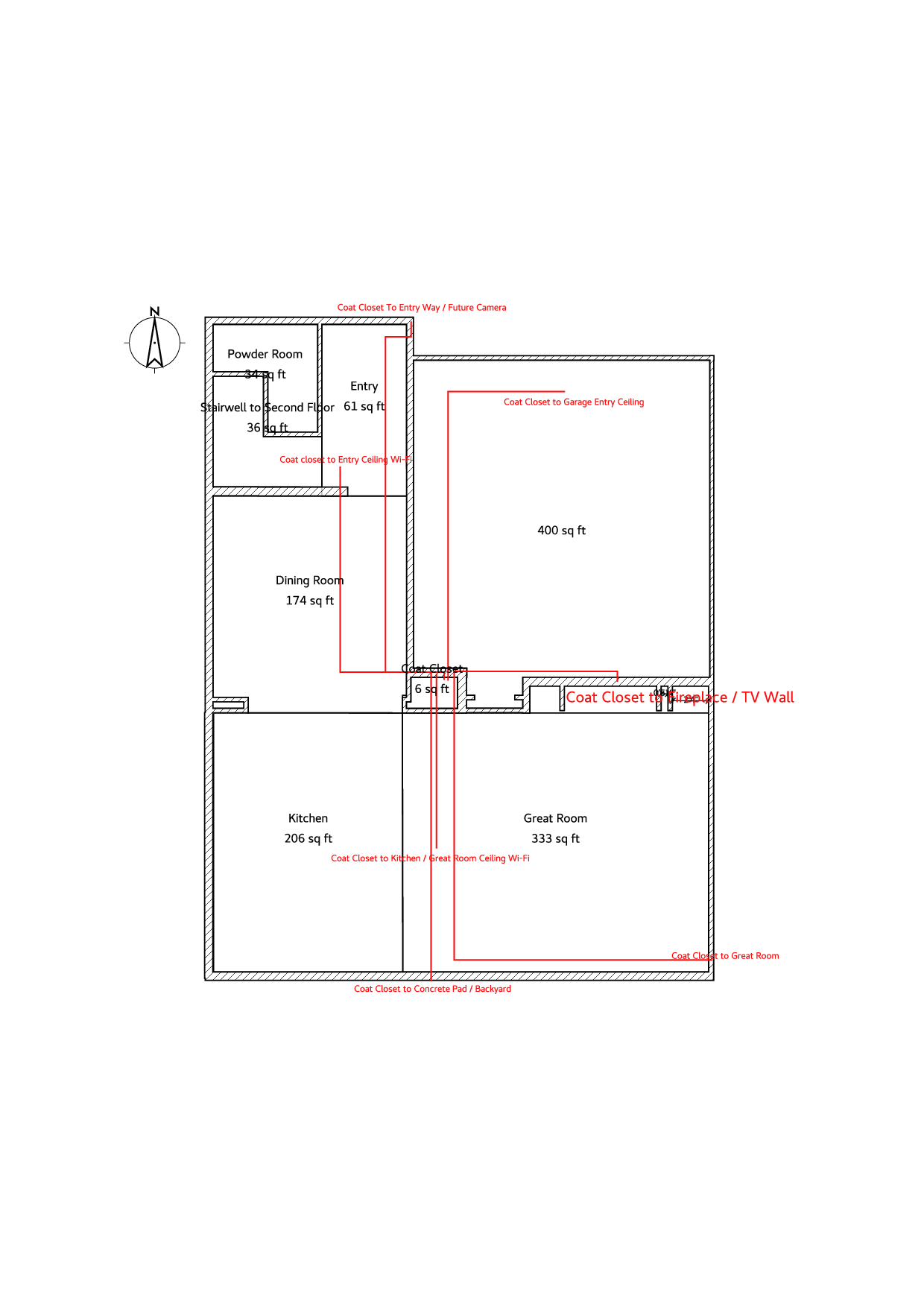 Second Floor: all second floor cabling is centralized to the laundry room panel. The second floor is connected to the first floor coat closet via 3-4in conduit. 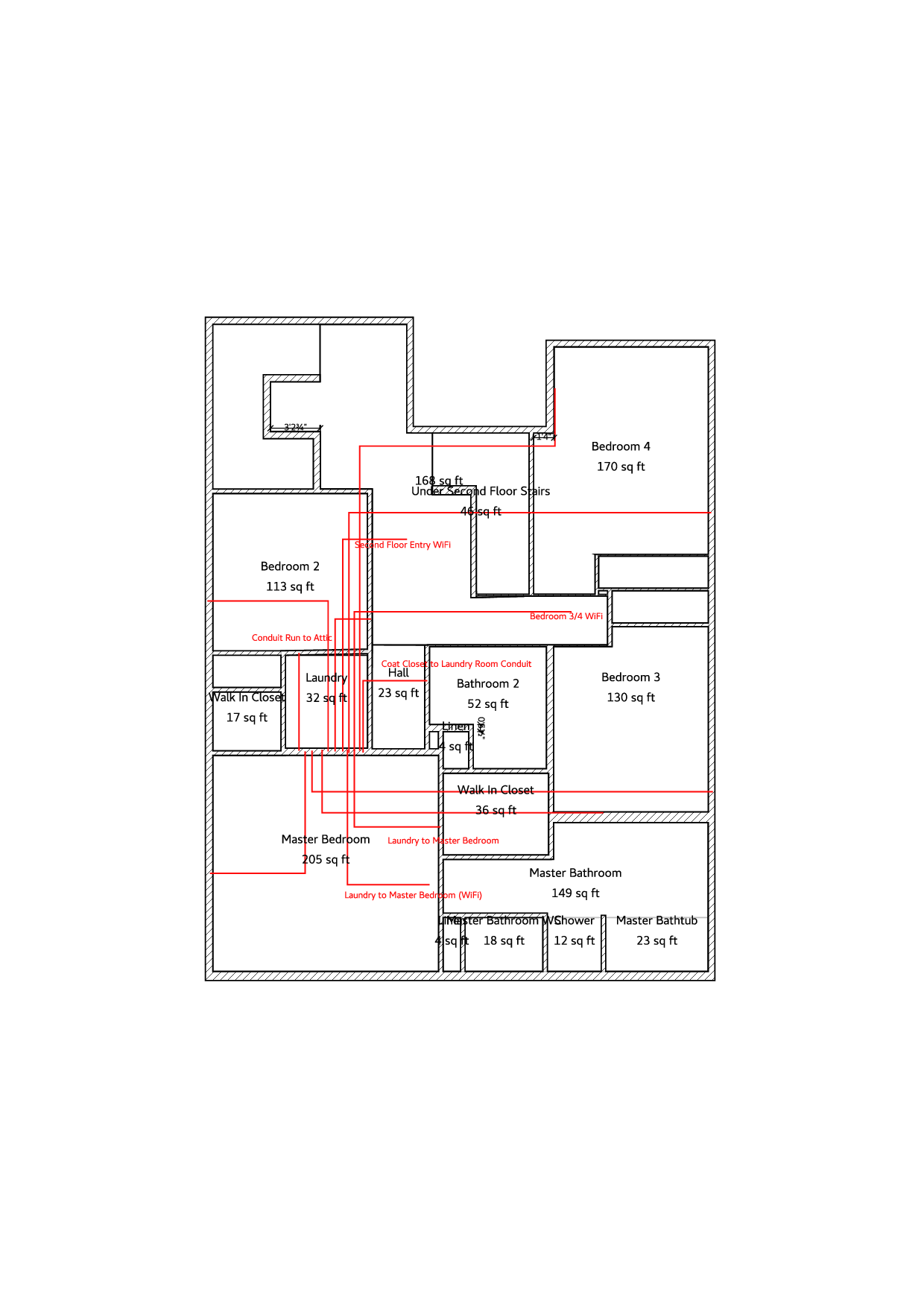 Third Floor: All third floor cabling is dropped from the attic (where possible). The attic is connected via 3-4 inch conduit direct from the coat closet, bypassing the laundry room. There would probably be a couple 90 degree turns here since the third floor is all open space. 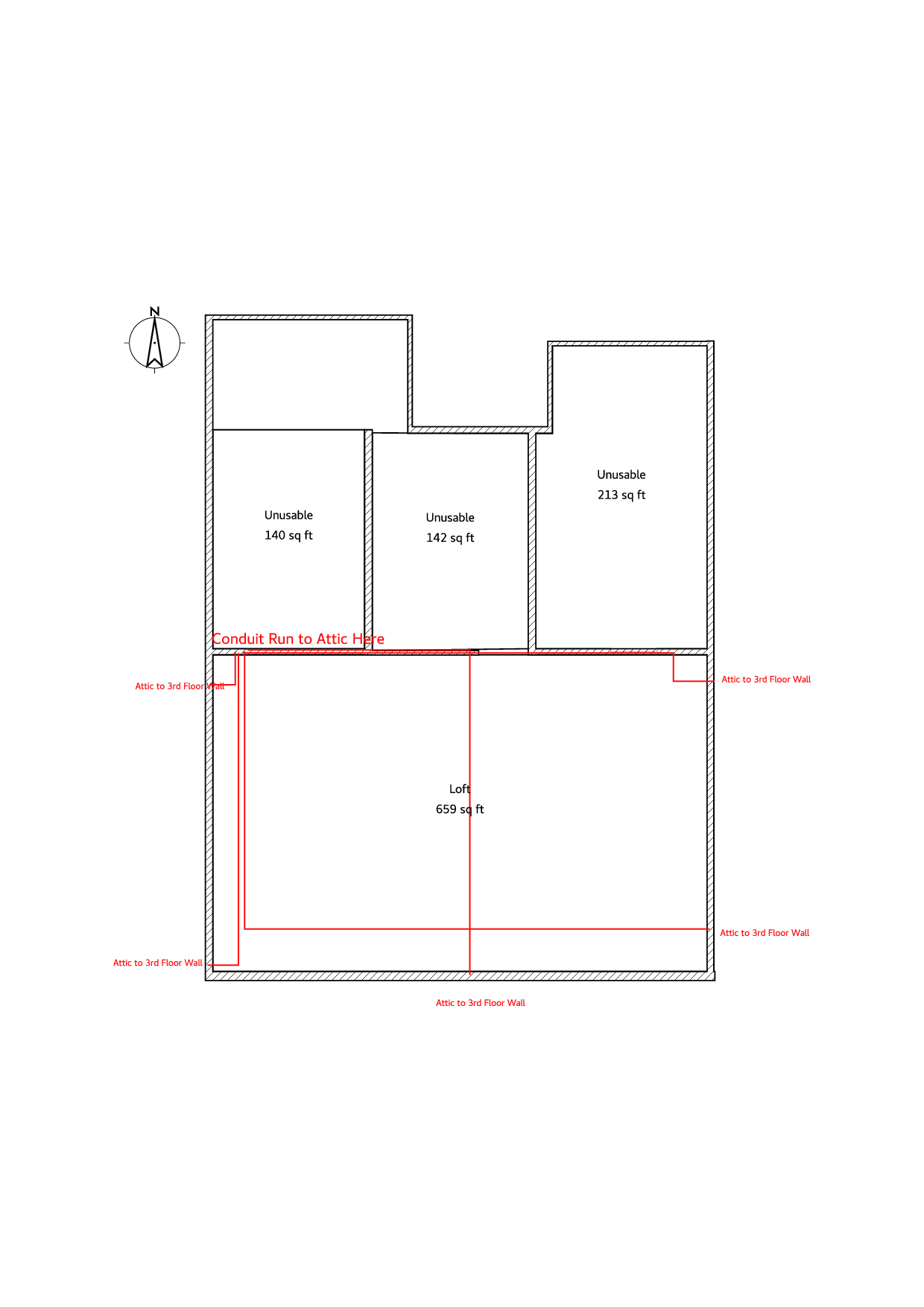 Right now, this would total to about 30 cable runs. My questions would be if it's feasible and economical to run this as conduit? Would it make more sense to have some as conduit and some as cat6? Are there any suggestions on improving the layout? At this point, I'm thinking of running empty conduit and pulling in cat6 only when I need it.

Conduit is always a good idea, in my opinion. Network/communications cable is something that has a much shorter lifecycle than a house. It's feasible, just requires application of money. If it's planned in from the design phase, that reduces the cost considerably .vs. retrofitting.

A house is not an office building, in most cases, so a single panel with every cable run to it is probably a more efficient layout than "patch panel per floor", as @Tyson commented.

Don't forget network to the middle of ceilings - the best place to put wireless access points, which work best when attached to wires.

As an aside, either use Cat5e or get Cat6A - Cat6 without the A is a cable that's only able to run 10 gigabit for short distances - at 1 gigabit, 5e is all you need.

As other's said... run all your cables to one central structured wiring panel. I believe the residential spec even recommends that. Have an outlet there that's on it's own breaker. Run your equipment on a UPS. I'd go with standard 19" rack mountable equipment over those expensive structured media systems. In 10 years from now you should still be able to find a rack mount patch panel if you need it. Who knows if the current manufacturers will still be making their proprietary (and usually much more expensive) components.

While it would be nice to have all your runs be in conduit I don't think it's necessary if cost is a concern. More cables instead of conduit would be my preference. It's not that hard to run cables through walls with insulation after the fact. If you're using blown in insulation it might be messy in some instances. I wound up adding cable pulling string along with the bundles I pulled so that if I needed to add a line to a wall plate in the future it would be easy. Cable pulling string has been my best friend while running cable. You may however want to run conduit between floors.

As Ecnerwal said running conduit between the service entrance and your wiring panel is a good idea. Cable, phone, satellite, etc needs to be grounded before it enters the home and that's typically done where your electric service enters the building.

You didn't mention anything about coax. I would run at least one coax cable to each location you'd typically want a tv. I did phone as well. I still use a land line and I have some voip lines I run through my home phone wiring too. The ANSI/TIA-570-C Residential spec recommends 1 coax and 1 ethernet to each wall plate, 2 of each or 2 of each and 2 fiber. I wound up doing 2 cat5e ethernet, 2 coax (one for over the air tv and the other for fios/cable/satellite) as well as one cat5e for 2 phone jacks in most wall plates. I didn't run coax to all but at least one wallplate in every room has 2 coax cables.

Over your fireplace where the TV will go I'd probably put 4 ethernet cables. TV, DVD, cable box, game system. Maybe you need more.

Don't ignore the dining room. Most people don't use their dining rooms for dining anymore. Either you, or a future occupant might appreciate having ethernet, phone and video there. Same goes for the garage and I'd have a wall plate for the kitchen counter area as well as near kitchen table if you have one. In 5 years when your coffee maker failed to start because it kept loosing it's wifi connection because the refrigerator was skyping with the washing machine all night you'll thank me :) I have pretty good wifi speeds but I try to have everything plugged in so the devices that have to use wifi get more bandwidth and run better. It's made a noticeable difference in running my cameras and other video devices.

The sides of the house don't seem to be covered by security cameras. I would add some there as well as in stairways and hallways. Don't assume an intruder will come in through a door. I'd probably use a separate patch panel for the cameras along with their own POE switch. Don't know what camera system you're planning on getting but if you're doing all this I'd plan on getting one with an NVR.

I have a few posts on structured wiring on one of my sites that you might find useful. I think the one on where to put ethernet jacks and residential wall plate configurations would be helpful for you.

I know that this is late and that there's an accepted answer saying otherwise, but I'm going to chime in to support of the patch-panel-per-floor as designed.

3
Should I be able to run some 1.5" PVC chase conduits from attic to basement next to a cold air return?
4
Cat 6 and Romex run perpendicular
5
New House Wiring in Attic + Conduit
3
Cat6 shielded cable or no?
0
Cable Modem Placement: Longer Ethernet/Shorter Coax vs Shorter Ethernet/Longer Coax
2
Can an induction range cause interference in nearby Cat6 cables?
3
choices besides UF-B wet damp location not inside conduit
1
Running cat6 through a wall