I have a 24'x24' garage built with standard frame construction. The garage is about 15 years old. There is attic space above the garage bays for storage.

The attic space has a knee wall of 2"x4" construction that attaches to the 2"x6" roof rafters. The knee wall has a bottom plate but no top plate, so that each stud of the knee wall is simply nailed to a rafter with 3 common nails. All of these nails are towed down at about a 30-45 degree angle. 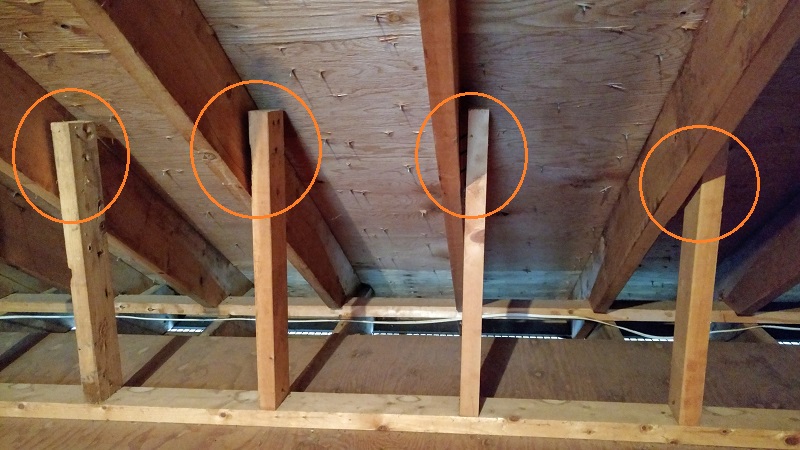 Based on the construction, it looks to me as if this knee wall was not intended to be structural. But, given that there's enough forces on the knee wall to separate it from the rafters, it is structural.

How should I repair this? As a temporary measure, I've used 1/2" steel bolts with fender washers to close the gap between the studs and the rafters, and to make sure that they never separate again. Is this sufficient, or should the knee wall be replaced with a structural one? 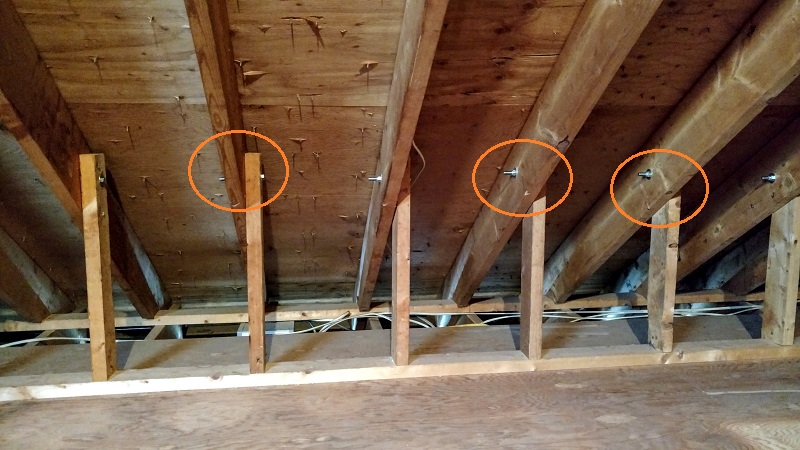 It's common for nailed roof components to work loose over time due to seasonal movement cycles. If you're sure that there was never any web bracing built into the roof, which the knee-wall studs now replace, the studs are not structural.

Your solution is probably just fine. I'd have probably used three or four 2-1/2" gold construction screws to save time and expense, but the bolts will do the job.

One caveat is that you've now transferred the movement somewhere else. You'll either see more pressure into the ceiling joists, or the roof may bulge slightly as things expand and contract. I don't anticipate any problems, though.

Not the answer you're looking for? Browse other questions tagged walls structural or ask your own question.

1
How would I replace this wall?
1
knee wall no venting possible
1
Question on finding studs
0
Removing a wall to the ceiling / roof
2
Where to split long walls
2
Need guidance on drilling through wall plates
2
Trying to Determine if Attic Braces and Collar Ties are Structural
2
ELECTRICIAN BORED 4" HOLE through top & bottom chords in attic — how to fix?
1
Old structure: 2X4 studs at 24'' on center
0
making converted attic into full height (roof tear off)