Is this pipe in my basement floor intended for radon mitigation?

This pipe emerges from the concrete slab floor in a corner of my house's full basement. I believe it's a 4" polyethylene sewer pipe (narrow walls, black interior, white exterior). I can't tell if it's perforated or not below the surface. 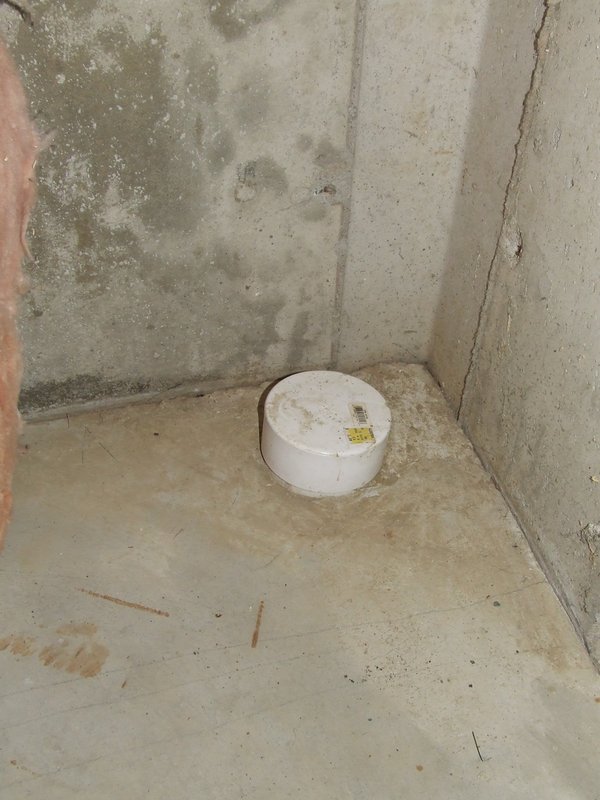 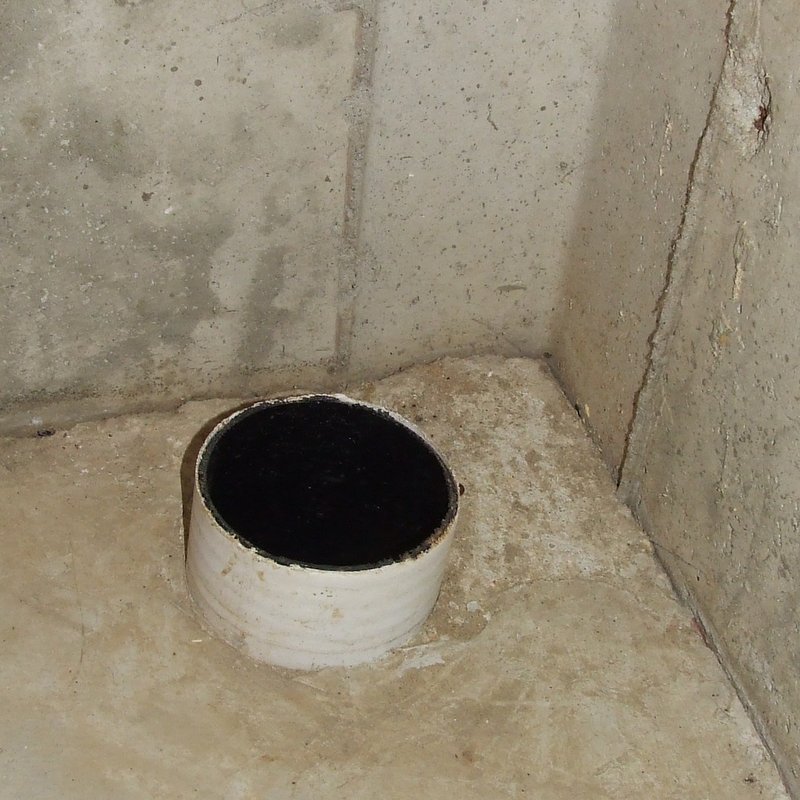 As you can see from the picture it goes down 4 feet. From that point it bends and appears to penetrate horizontally through the adjacent frost wall. (I know this from fiddling with a tape measure and a flashlight.) 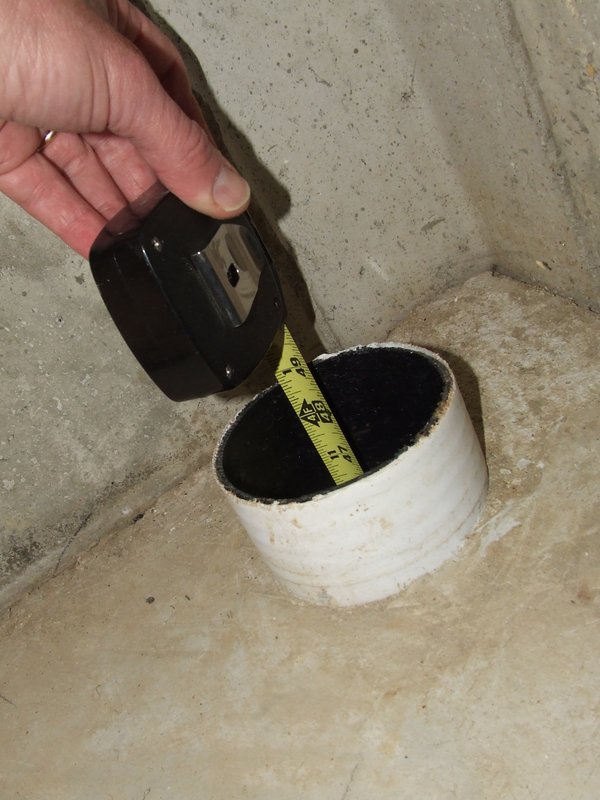 When I uncapped it, I noticed that air seemed to be blowing out of the pipe into the house, and I wondered if it was connected to either of the mystery pipes that emerge from the ground at opposite corners on the outside of my house. 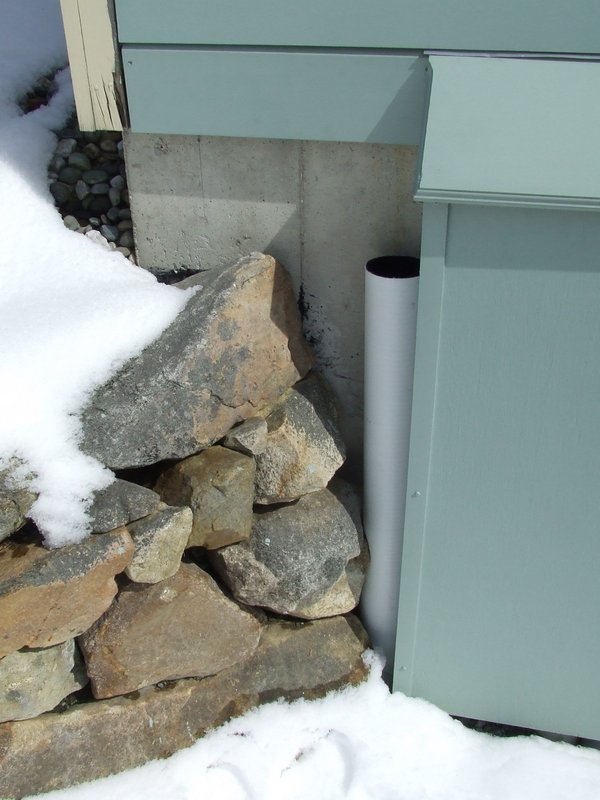 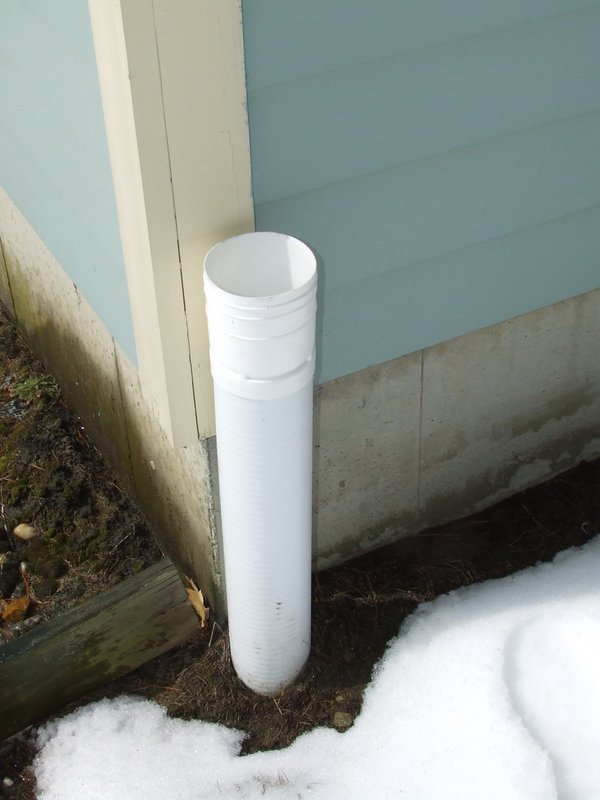 I eventually convinced myself that the pipe is connected to the nearer of the two exterior pipes. (I did this by putting a vacuum down the pipe inside the house and noticing that the nearer exterior pipe was sucking air when I turned on the vacuum.) 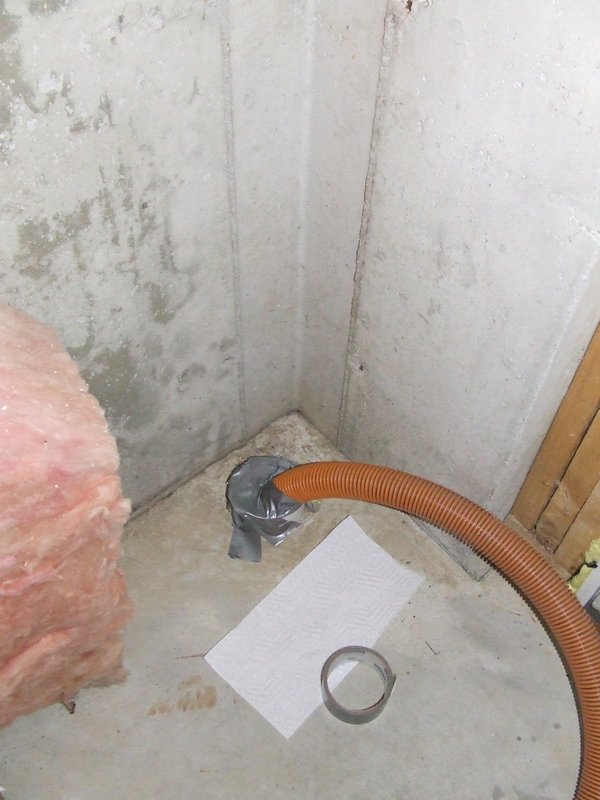 This is the layout:

Various contractors at the house have speculated about the pipe's purpose. Theories include:

I am about to finish the basement room, and I intend to wall off access to the pipe. But I would like to know what it's for before I lose access to it forever.

Yes, your area is known for radon and it It looks like pipe is the rough-in for a radon system.

When we install radon piping, we install a series of perforated pipes embedded into gravel in the crawl space or under a slab-on-grade floor. We also provide a series of pipes in the ground around the exterior of the building too.

Usually the two systems are not connected, but work in tandem. The exterior pipe and gravel provide an inlet for air, so the interior pipe and gravel can exhaust the air under the building. However, the exterior gravel needs to be "connected" to the interior gravel (gravel under the building,) so air can be drawn through the gravel under building to purge the area.

The reason the two pipes seem to be connected is that the two gravel systems are connected.

I'm sure that you've walled that in by now...

Would the general location of that pipe be a good spot for a wood or pellet stove?

My speculation is that pipe layout may be for a 'cold air intake' for a wood stove. When installed in mobile homes wood stoves must be fed by outside air because the mobile home is supposedly 'so tight' relative to air leaking in. The benefit of having a cold air intake for a wood stove in any home is that the air that goes out the chimney has to get into the house from somewhere (through electrical receptacles, around windows and doors, etc.); if piped directly from the outside the air can pass through the wood stove without creating negative pressure in the house and pulling cold air directly into the living space.

First, I must compliment your diligence and documentation. You'd most likely make an excellent engineer.

Given the location of the exterior pipes, one would be led to believe it was for connecting downspouts to. It appears in the pictures to be "thinwall" sewer and drain pipe, as opposed to the more durable Schedule 40 pipe normally used in residential plumbing. However, I am unfamiliar with that ABS-looking black interior of the pipe, and the "rings" that appear on the exterior, as if it's some sort of hybrid.

With that being said, it looks as though all 3 of the stubouts are of the same pipe, and were placed during construction. It is extremely unlikely they were intended for radon mitigation...especially if the pipe isn't perforated.

The thing that doesn't make a great deal of sense to me is that the connected pipe in the basement goes 4 feet deeper for whatever reason. If the terrain outside is level, this would put the lateral depth of that inside pipe around 10-12' lower than the exterior ones? Why? Even if it were a cleanout to theoretically auger a clogged downspout line, why make it 4' deep?

Is there some really strange terrain around the outside of the house that would require this?

There's no reason to perform radon "mitigation" in a basement with a poured concrete floor and walls. Radon is a gas produced by the radioactive decay of uranium and radium in granitic rocks and their sediments. If you had one of those 100 year old exposed stone basements with a dirt floor, you'd have a radon problem (maybe) worth considering. As it is, your basement is as close to being a fortified bunker against radon intrusion as you could hope to build.

Maybe it's just a dryer vent.

Not the answer you're looking for? Browse other questions tagged plumbing basement radon or ask your own question.