I just finished removing 100 year old plaster/lathe combination over a long load bearing wall in my basement. It revealed quite a bit of termite damage to a load bearing wall and header going across the bottom of the house.

The current structure is a bunch of 2x6 studs holding up 2 stacked 2x6s across the top as the header. I know this isn't to any sort of current code, but I'm looking to shore up the existing setup for the short term until I can do a full replacement. 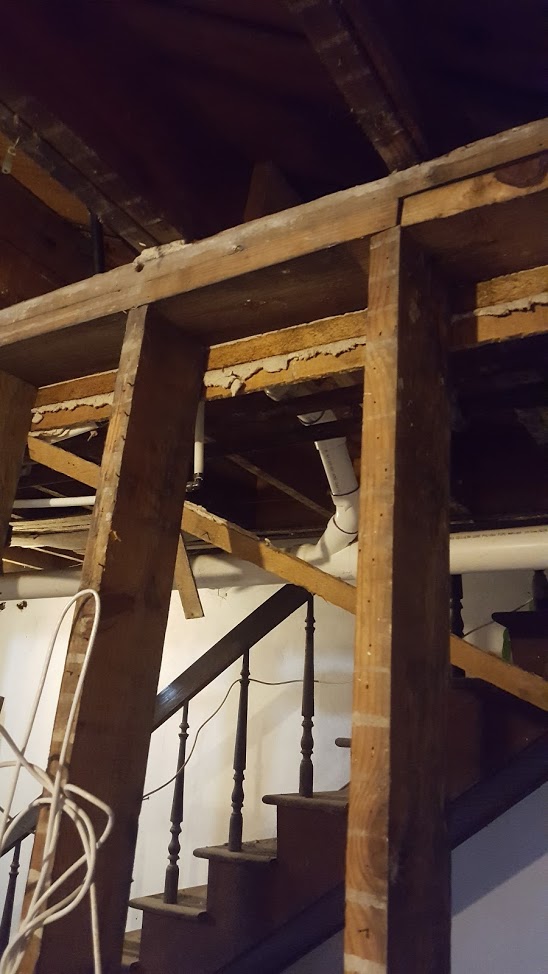 I'm wondering what the right process is here. Do I cut a couple 6x6s to just slightly longer than the current studs and pound them in? Should I mechanically secure them to the header somehow? I've found plenty of info on sistering joists, but little on the right way to do that for a load bearing wall.

Regardless, yes you can confidently shore up that wall by creating a temporary wall adjacent to it. If it is a basement floor it is likely to be sloped, so studs may have to be cut differently. I'd recommend attaching a top plate to the bottom of the joists, and place a "floating" bottom plate directly below on the floor. Cut the studs no more than 1/8" proud of the actual height, align the top under the floor joist, and pound in the bottom. Since it is going in at an angle, the edges will dig in some, but at only an 1/8" long it will be minimal.

You will likely have to repeat the process on the opposite side of the wall, since the joists are "lapped", and the other side is essentially independent. You'll know that you've accomplished your goal when the original stud starts to feel "loose", with only the nails holding it in place. If you have a reciprocating saw (Sawzall) you'll know the weight has been supported when the kerf of a cut through the stud no longer tries to pinch itself shut. Be wary of this method, though, because if there is still substantial pressure on the stud the kerf will begin to close as you pass the halfway point, which can result in kickback.

The shoring wall(s) should be at least as long as the section you're replacing. If it is indeed termite damage of the bottom plate, I would wonder how the wood could have supported any weight. I used to live in Wisconsin, where that type of construction (lath) was very common, as were full basements. Termites were unheard of, however.

Now I live in South Carolina.... Termite heaven. However, basements are very rare here... most homes are built on crawl spaces or slabs. If it is indeed termite damage and not just dry rot, I would highly recommend a thorough investigation of the rest of the house. The bottom plate in the center of a basement likely wouldn't have been a point of entry unless there is a crack in the floor nearby. If it was the point of entry, the termites would likely have began tunneling up the studs themselves as the colony grew and spread.

Look for "mud tunnels" or other very well defined tunnels chewed through the wood. If you find them, expect that they have also munched on other areas of the house. Hopefully it's just dry rot!

Not the answer you're looking for? Browse other questions tagged walls basement structural studs load-bearing or ask your own question.