How to connect old garage with the new home addition

I'm planning to build a home addition between the old house and old garage. I wanted to know what is the best practice to join an old building(garage) with the new structure.

Leaving an empty space asks for troubles and it looks weird. But I can't really use garage's wall as it has an old wood wall and hold the whole garage. That wouldn't right. So how is that normally solved? I don't want to tear the garage side down and let the home addition's new wall be part of the garage's wall either. 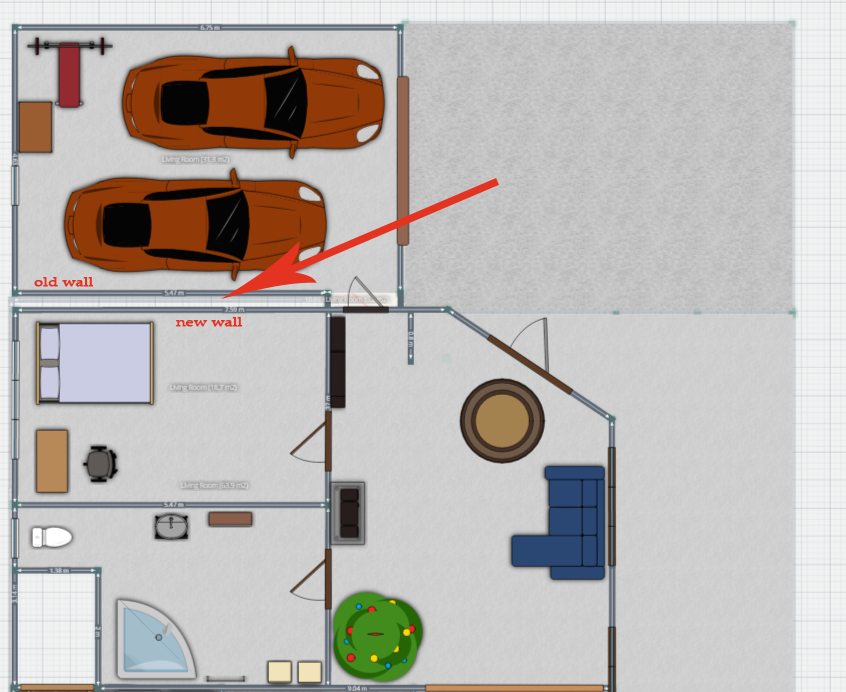 There is absolutely no concern with a small amount of space between a new addition and the garage from the ground level. In fact who is helping design this is smart for not attaching new structure to old, in that if garage foundation is poor you don't want an issue with new addition because of this and also vice versa. A new addition's foundation may settle a little bit in the first 5 years - you don't want it pulling on your garage.

The main concern over this sort of practice is what happens to the roof line. If done properly there are no issues whatsoever but you obviously don't want water going into an empty space, even if there is a drainage plan. That is a different question you can pose on the site though.

So let's stick to the first level and how it looks and functions. The gap you are pointing to - no one will even understand there is a gap there unless the doorway section from the garage is done really poorly. Obviously you shouldn't be able to see into the gap from before the door threshold and this should be closed off. So this would just be a thicker threshold to a person walking through it. Only someone who is really thinking about it would even think there is a small gap between the rooms - because they can't see the bedroom wall from where they are. A second point is there is nothing but good things to say about creating more of a barrier from exhaust fumes to a bedroom area. Having exhaust fumes in a living room sucks but you are usually awake and can say wow that stinks let's open up windows, directly next to bedrooms poses a bigger risk.

On the outside behind the garage it should just be sided over continuously up to soffit.

The last part of this is just my personal opinion as I have done a bunch of additions. I would suggest jutting out the house a little further on the garage side before you angle it. I would then create a full on mud room for the first 5 feet of the living room. It will just be unusable space anyway as it will be filled with shoes and organizational things. I would also rethink the exterior door. If you already have an exterior door on that side of the house I would not put in a second one as I can't think of ever doing an addition where I had two doors going to the same room, and that close to each other. If there was a for sure need I would feed them to the same mud room. That way you are defining the living room as a "nice" living space instead of a cross-roads of bunch of doors.

And just more of personal opinion. I don't like the floor layout. Other than needing a mud room, I think having a bedroom and bathroom directly off a living area is a bit much. I have never paid for this, although I have seen it done. When I have seen it work is when this layout is on the corner of a house so that in effect you are creating a master suite space with its own living room. Here this doesn't work because you have garage traffic constantly. If your plans aren't 100% done I would get feedback on the site about a more effective layout. (One where you don't have the ability to take a crap and talk to the guy watching t.v. on the couch)

Not the answer you're looking for? Browse other questions tagged walls connectors building or ask your own question.

4
My kitchen has no real walls. Is this going to be a problem?
0
How can I protect the wall behind a closet from developing a mold problem?
2
What can I use to build temporary walls in an unfinished basement?
7
How to Connect Modems to Wall?
1
How much clearance do we need for side-loading garage
3
How should I connect my new Fagor wall oven to the existing wiring?
1
is it common not to have wood under the stucco on walls on a new home ??
0
How to connect Washing machine output water to WC seat?