I have a stand-up shower with two knobs (one for hot, one for cold). The shower drips non-stop, what is amazing to me is that the shower drips even when you are using it to take a shower!

This is an image of similar set-up of how the shower appears, what actions could I take to prevent it from constantly dripping from the shower head? 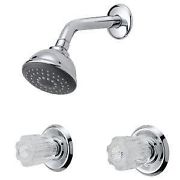 EDIT
Let me add that the shower drips from the "head" not coming from the knobs. The shower head seems to have a very slow/steady trickle coming from one of the "holes" that is just enough to pool on the outer lip of the head and drip down constantly.

You have two issues.

The first is the dripping when the shower is off. Most likely your gaskets are worn and need to be replaced, though it could be another issue in the valves such as worn valve seats. These gaskets are rubber parts inside your hot and cold water valves (and possibly in your diverter valve) that prevent water flowing through. There are valve replacement kits available at hardware stores for many common brands. The process is a little different for different faucets though, so ideally you would identify the brand you've got and look for guidance on that specific brand.

Next the dripping when the shower is on. A few things this could be:

Not the answer you're looking for? Browse other questions tagged shower leak or ask your own question.

4
Why won't my water heater stop filling?
0
Can I prevent my tub faucet from leaking by diverting the water to the shower, and shutting off the shower head?
0
Dripping hand held shower head in off position
0
Pipes that supply water to washing machine are constantly dripping
1
Dripping Sound from inside toilet tank
1
Shower valve washer on hot needs replacing constantly
0
AC unit dripping onto crawl space vapor barrier
1
Water leaking when shower is turned on