Can I remove ceiling joists without risking the integrity of my roof system?

We have a 23x12ft room that we are looking at opening up the flat ceiling. The 2x6 rafters are parallel with the long side the the room and there is one beam (3 2x6s) that seems to be a rafter tie running this long length of the room. Looks to have a 2x6 coming down from the peak of the roof at the ridge board down to the beam.

The ceiling joist 2x4s are running at right angles to the beam and rafters across the 12ft span of the room. These joists are below the beam and are tied to it by 2x4. We were told that the joists are not providing structural support and were merely for affixing the flat ceiling.

We had hoped to remove these joists and wonder if the 23 ft beam of 3 sandwiched 2x6s (board seams are staggered) will have any sagging/structural issues if we did. Are there structural concerns with removing these perpendicular ceiling joists?

There are collar ties at in the top third but no other rafter ties besides this beam. 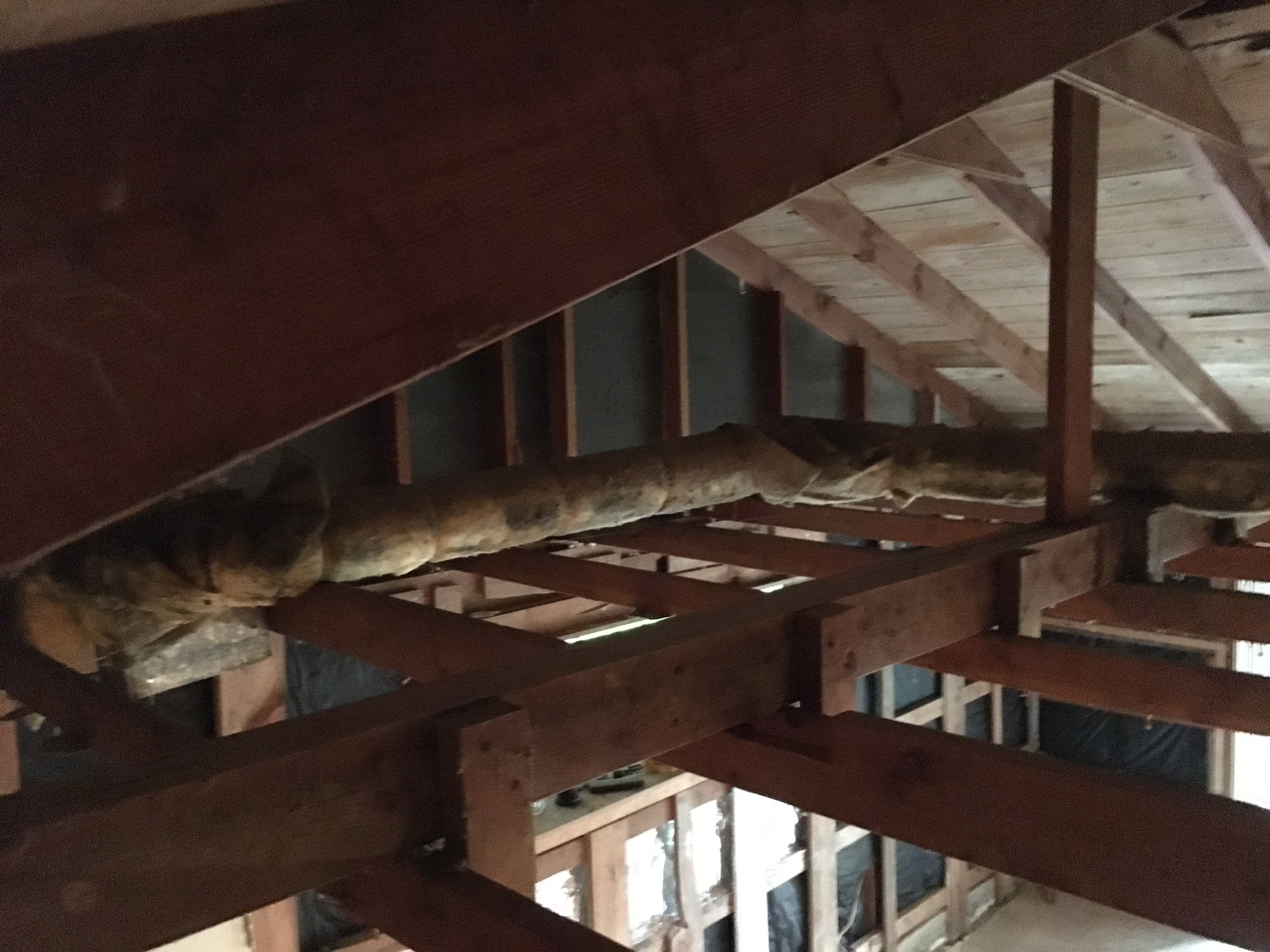 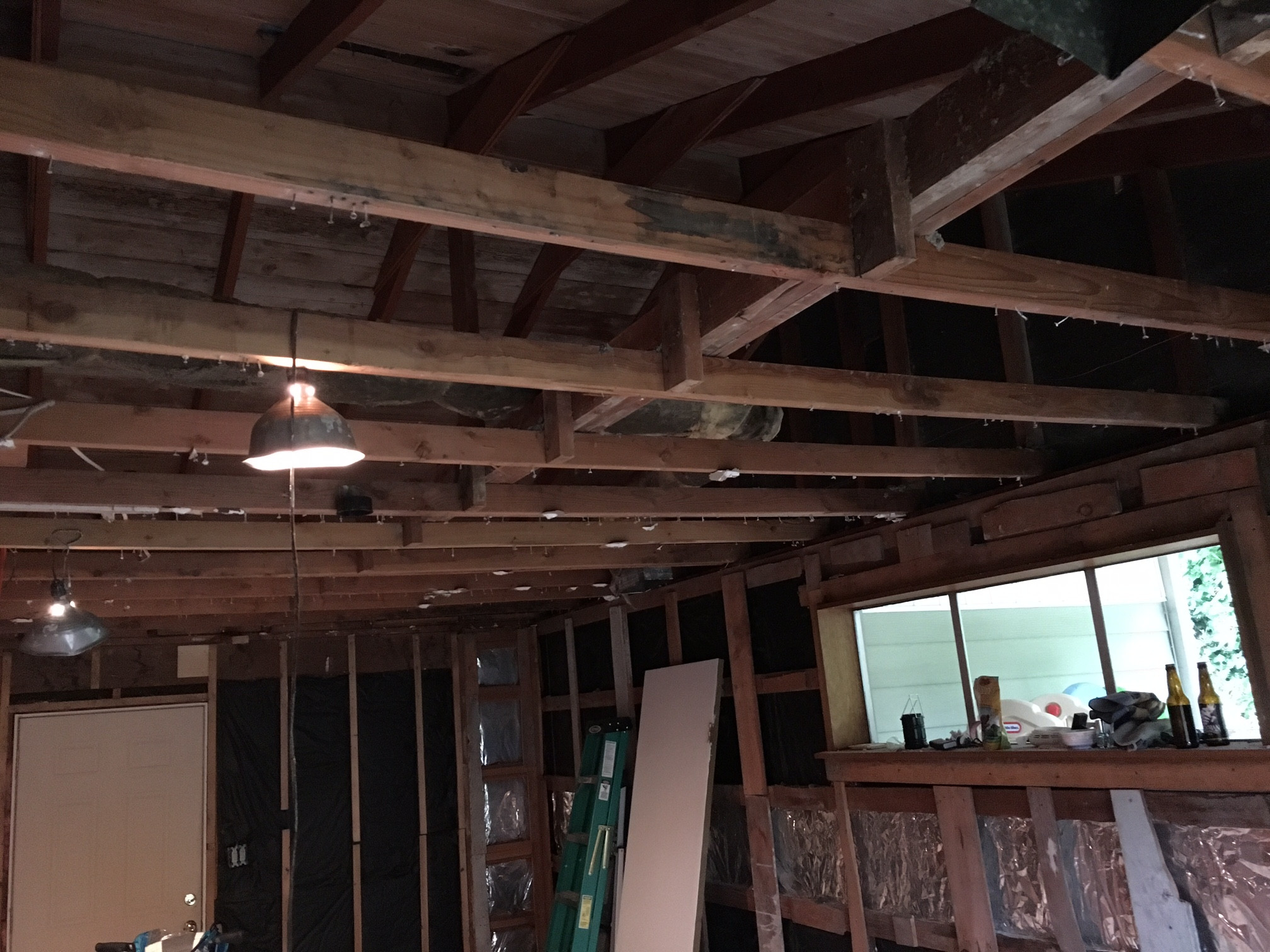 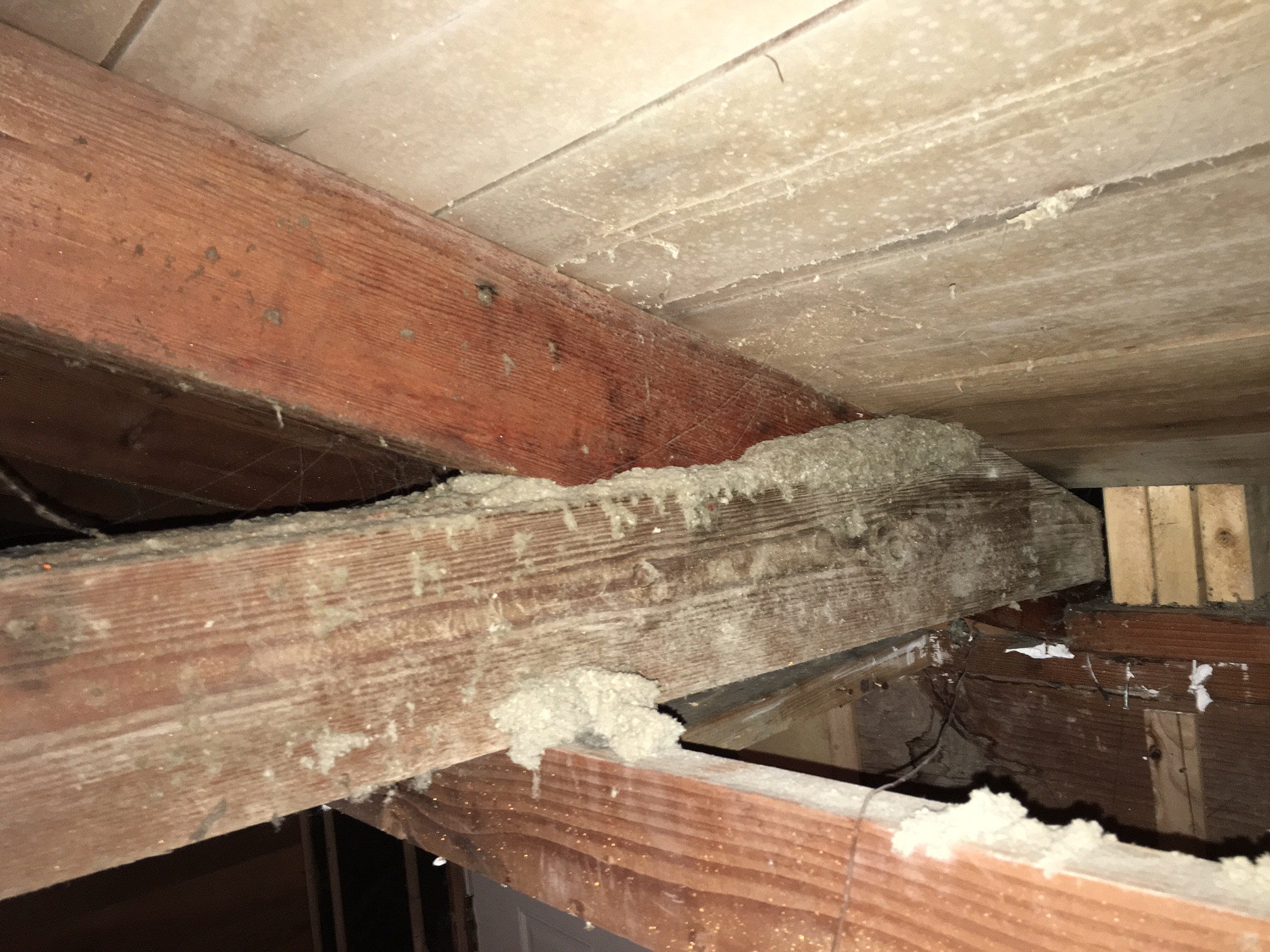 I believe that you're correct about the ceiling joists being entirely for cosmetic purposes. The rafter tie keeps the walls from spreading, and it appears to be adequately suspended by the roof structure as a whole.

You're probably doing the rafter tie a favor by eliminating the ceiling joists from its bearing, and unless you add substantial weight back onto it I don't have cause for concern.

All that said, I'm sitting here in Minnesota looking at your place in Washington through a peephole. You really do need to get a qualified professional on site to make a more reliable assessment of the situation.

I have a structural background (somewhat) and I don't get it. There is no reason that the whole thing doesn't fail...how'd they do that?

First, the existing 2x4 ceiling should not be able to span 12' and support the existing gypsum board without cracking due to extreme bending.

Third, there is no reason the the walls are not bowing out due to the thrust the roof structure is placing on the top of the wall. Yeah, I know, the roof ties (and strong-back) are installed to hold the roof rafters from pushing the top of the wall out of plumb. The downward thrust (when loaded with snow, etc.) will cause the flimsy 2x4 roof joists to deflect (bend) and push the wall out of alignment. Having one strong-back is not sufficient to ties the walls together.

I just don't see how you can remove ALL the ceiling joists. Maybe an alternative would be to keep every third or fourth ceiling joist and wrap it with gypsum board. That would make the ceiling appear "open".

Great...now I'm going to be up all night trying to figure this one out.

Not the answer you're looking for? Browse other questions tagged ceiling or ask your own question.

4
How far can I move ceiling joists up?
1
What is the best way to hang a heavy dynamic weight from a flat ceiling with joists?
0
Can I install 1x6 T&G boards over 1/2" drywall on 2x6x14' ceiling joists
0
How much space do I need between rafter ties?
2
Can I knock down this wall without the whole place collapsing?
7
Increase size of ceiling joist compromise roof strength?
2
How to fix sagging ceiling?
1
Best method to level 1x3 strapping to ceiling joists on a slope?
0
Vaulting ceiling and removing ceiling joists without risking the integrity of my roof system?
0
Adding ceiling joists to workshop shed