What is a tandem breaker (aka duplex, cheater, twin, double-stuff, etc.)?

I keep hearing about tandem breakers, and how they won't work with 240V loads and how they should never be used for a multi-wire branch circuit. Aside from those issues...

What is a tandem breaker? 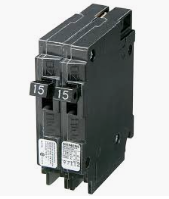 (note: they can be thrown independently).

It starts with spaces in the panel

A service panel has a basic unit I call a space. That's apparent when you look at the "knockouts" on the cover.

Electrical power in North America delivers split-phase power. Meaning there are two "legs" or "poles" - L1 and L2 - both 120V from neutral, and opposite-phased so they add up to 240V. 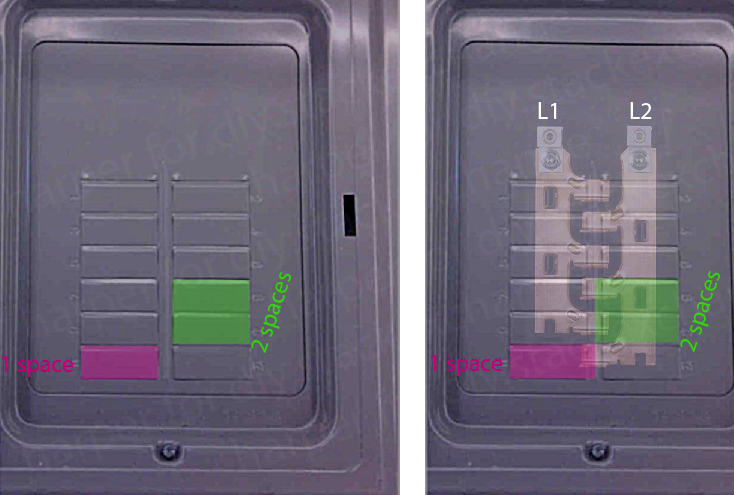 Here's an X-ray of a service panel cover. See the trick? The buses are arranged in alternating rows. Every other row is a different pole on both sides. Any single-space breaker gets only one pole and 120V (its circuit also attaches to the neutral bar, not shown) -- but a 2-space breaker has access to both poles and 240V.

A single-space breaker cannot get 240V. That's very important when we get to duplex breakers. Now let's fit some breakers. 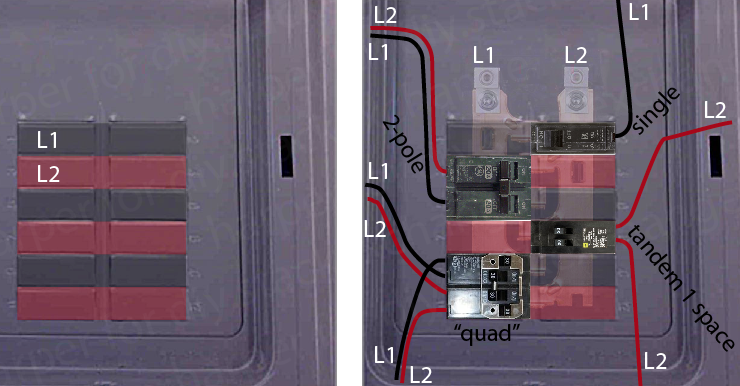 On the upper right you see a single breaker. This occupies one space and serves one circuit.

On the upper left, you see a 2-pole breaker: this occupies two spaces, and can access both poles L1 and L2. Both sides will trip together if either side overloads. This is used for 240V loads, or for multi-wire branch circuits (MWBC). 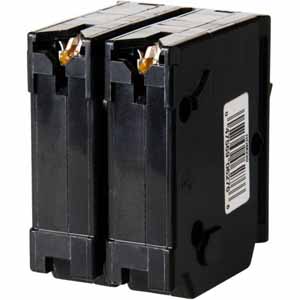 Backside of a 2-pole or quad breaker. Note the 2 clips grabbing 2 different poles.

On the lower right is the star of the show: the duplex/tandem breaker. This occupies a single space and can only access a single pole. The sides will not trip together. It cannot power 240V loads, it must not power MWBCs, and it is generally used for two unrelated circuits. The entire point of the duplex is to save space in the box. We often call that a "double-stuff" for obvious reasons, and to emphasize how it's different from a 2-pole. 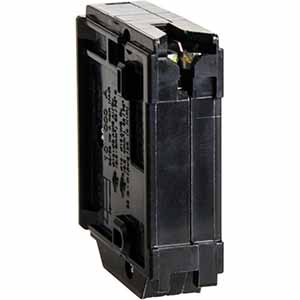 Back of a duplex breaker. Only one clip to grab one pole.

Lower left is the quad breaker, a 2-pole duplex breaker. Again the purpose is to save space. It's just what it looks like, 2 duplexes, except it can access both poles L1 and L2, and it has handle-ties so the inner pair will trip together on overload. That makes it suitable for a 240V load or MWBC. On this model, the outside pair is also tied together with common trip and can serve 240V loads or MWBC. Or, you can get these breakers with outer breakers independent.

General Electric's Q-line panels take a different approach to the problem, and you will never find a quadplex in Q-line.

No substitute for spaces

Most panels only allow these double-stuff breakers in certain positions. Some only forbid it in their labeling, while others actually key the buses so duplex breakers won't fit. Don't force them.

Nowadays in new or remodel work, most circuits must be GFCI and/or AFCI. Here's the trick: for most panels, GFCI/AFCI breakers are not available in duplex/tandem/double-stuff. This is why you can no longer add circuits by switching to these, and why being low on breaker spaces is kind of a big deal. Which is why many of us recommend quite large panels.

The 12-space panel featured here for illustration is terribly small, more befitting a shed than a house. They are made as large as 60 or even 84 space. Many will say "40 circuits/30 spaces" meaning they can accommodate double-stuff's in 10 spaces, but only have 30 total. Watch out for that.

The lowdown is panels are sometimes better compact and squeezed down for minimal space saving features. To achieve this, panel manufacturers use what is called tandem breakers.

Most panels have a maximum allocation for tandem breakers and is abbreviated with a ratio. For example 12/24 ( 12 space / 24 circuits ).

Not the answer you're looking for? Browse other questions tagged electrical electrical-panel 120-240v mwbc or ask your own question.

1
What's the purpose of a dual two-pole breaker?
49
Half my power out, but firing up an appliance turns it back on
20
Weird Power Outage in Certain Rooms- Condominium
19
Half my house losing power, HVAC the key factor
17
240 V outlet is not delivering 240 V
8
Sum of current measured from breakers different from main breaker
9
Can you use a 2 pole 2-slot wide breaker to provide 240V?
7
Working out which plug is on which half of a handle tied circuit
5
Is there a reason the service entrance wires are not attached to these lugs?
13
Why are adjacent breakers for unrelated circuits ganged?
See more linked questions