Are there good options for attaching roof eaves/overhangs essentially as cantilevered beams with a fixed support? This is a monoslope (lean-to) roof with a 2:12 pitch (~9.46 deg), unheated structure, and I'd like to "bury" the rafters so that they hang more like ceiling/floor joists instead of sitting on top of the carrying beams.

Can I use something like this rafter connector? Will that meet code? 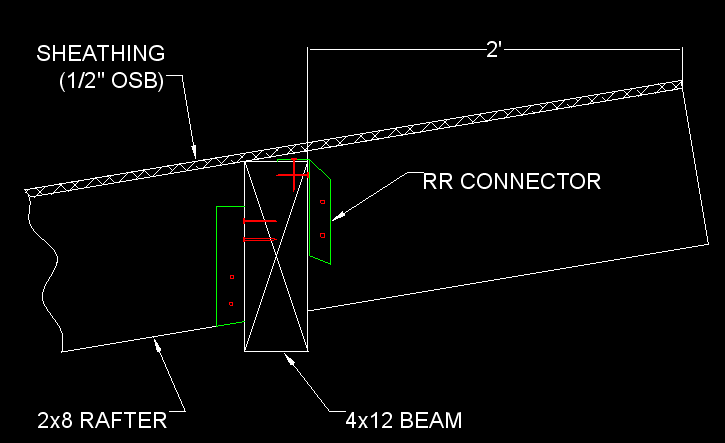 Another option I thought about is attaching the eave rafter with a couple of bolts through the carrying beam: 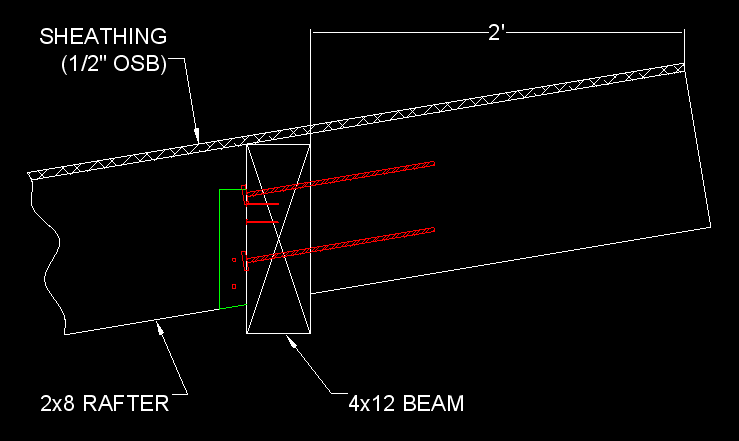 Is there a name for this type of connection? I'm not quite sure how to evaluate the stress.

So, I think there are 3 options:

Option 1: The 2x8 joists are in "reverse-bending" as they pass over the 4x12 beam. So, the top half of the joist is in tension and the bottom half is in compression. If you carefully notch the bottom one-third of each 2x8 so that the joist fits tight over the 4x12, then the overhang won't sag or fail.

Note: In your original statement you indicated that the total load is 90 psf. This seems extremely high. Did you mean 90 plf on the 2x8 joists. If so, that would make the snow load 40 psf, which is high, but reasonable. (Meanwhile, I'd double check the span of those 2x8's.)

If it were me I would notch both the beam and the rafters so they key together.

Perhaps increase the 4x12 to three 2x12s to compensate, then notch it down 4".

Notch the bottom side of the 2x8s up 3". That will leave a 0.5" gap between the top of the beam and the bottom of the sheathing for ventilation. Or you can set it right down to 3.5" notch if you do not want a gap.

Cuts should be accurate so they fit snuggly together.

I'm pretty sure a 2ft cantilever with 360lbs won't hold with your current plan. That's like 2,160lbs pulling on those screws, nails and bracket.

Not the answer you're looking for? Browse other questions tagged framing engineering or ask your own question.

1
Replacing a spanned “beam” with a cantilevered beam
2
Connecting band/rim joist to floor joists on a cantilevered deck
0
question on the roof structure of my garage
2
How should I replace a cantilevered rim joist?
0
Framing design for small cathedral ceiling or A-Frame. Max Headroom
4
How to double up an existing single beam without disturbing the structure?