Considering the voltage drop calculations here: What is the maximum 12/2 wire length from a 20A breaker to a baseboard heater?

What is the best approach for wiring these 4 exterior receptacles on the same circuit? What about running a 6-2 gauge wire to the center attic in a junction-box, then branching from that using 10-2 to all 4 exterior receptacles? Will that meet NEC code if i drop it in conduit from lintel-level to receptacle box? 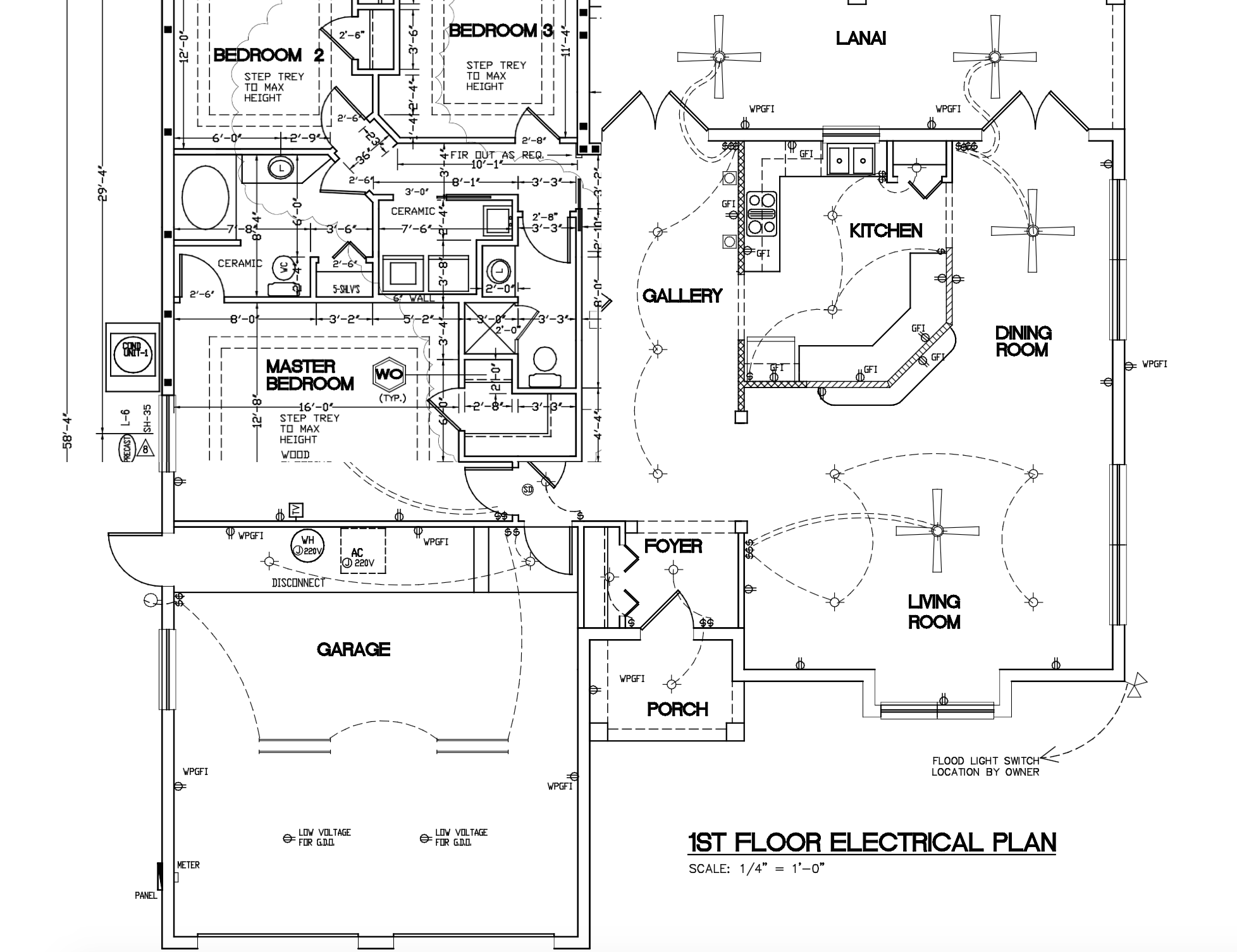 The drawing is cut off and we can't see most of the exterior receptacles, but it looks like they're mostly on the far side of the building from the panel (lower left and I really hope the panel isn't outside, that's asking for trouble).

Seriously, one guy strictly following the 3% fake-rule was about to install 600kcmil for his 1600' run to a couple of 10-watt post lights. I showed him how to do it with 14AWG.

Nothing says you must wire in a string all the way around the circumference of the building. You can wire a separate homerun for each receptacle. Or more likely, you can wire in a star configuration, or even more than one star.

For instance as you suggest, I would establish two "stars", one at the panel and one, about I don't know, the kitchen. I'd take each receptacle to whichever "star" is nearest. In some cases that might end up being a home run to the panel.

If you have 2 or more homeruns, you can either make them separate circuits or the same circuit, up to you.

I know some places like the Philippines use 2 breakers per circuit, and panels get pretty crowded pretty fast. You can get panels with as many as 84 spaces - panel spaces are cheap, buy LOTS of extra. You can also do sub-panels - that might be a good idea given the size of the house. If you had a sub-panel in, say, the laundry room, a lot of these concerns would go away. You'd have to do a load calculation to see how large the subpanel should be, too large is not bad. It can't exceed the size of the main breaker obviously.

What is the max length for a base board heater? There is no max length but there is a max voltage drop. Since you did not provide the load there is no way to help other than point you to the web voltage drop calculator. Easy to use input the info and it will provide wire size. Use 3% for max voltage drop. You are way over thinking the voltage drop, even with huge homes I have never used more than #10 and that is because the owner wanted it. You will have a hard time finding a 20 amp breaker that is listed for #6 wire.

Not the answer you're looking for? Browse other questions tagged electrical wiring exterior layout or ask your own question.