Can I use LVL 2x4 outdoors (pergola roof)

A few days ago, I got a letter from the HOA telling me that I have to replace the warped, twisted, sagging 2x4s forming the roof of my pergola.

I have absolutely zero confidence that any PT 2x4 I buy from Home Depot or Lowes won't warp/twist/sag the exact same way within a matter of months, let alone years. Three weeks ago, I replaced the first one with a normal 16' PT 2x4 from Home Depot as a science experiment. I didn't have to wait long for the results.... it's not even a month old, and it's ALREADY bowed.

I did more research, and discovered LVL (and LSL and PSL) engineered studs. Except nobody seems to make a 2x4x16' (1.5"x3.5"x16') stud that's officially approved for outdoor use.

The boards won't ever have to support any weight besides their own, so life-safety and code-compliance aren't concerns. However, I've also seen what happens to OSB and particleboard when they get wet.

From what I've gathered, PSL swells when it gets wet, and never goes back to its original form... but Weyerhauser has a product (Parallam Plus PSL) that supposedly IS marketed for submerged use. Unfortunately, the smallest size you can get is 4x10 (3.5x9.25), and apparently you can't just take a 4x12 and slice it into multiple 4x2 pieces with a table saw.

I read on another site that LVL studs will swell and cup when wet, but return to their original straight form once they dry out. I got a quote on Boise-Cascade Versa-Stud LVL from Home Depot, but when I talked to Weyerhauser's support rep, he was ADAMANT that it could not be used outdoors (but wouldn't elaborate on whether it was because it would swell/warp/disintegrate, or just a matter of regulatory approval).

Has anybody seen what actually happens to a LVL (like Versa-Stud) when it gets used somewhere that's directly exposed to the elements (albeit painted)? Likewise, if I sliced a Parallam Plus into multiple faux-2x4s and used them instead, would their APPEARANCE be compromised, or would they just be useless for loadbearing applications (but perfectly capable of supporting THEIR OWN weight if they're just laid horizontally on top of a pergola)?

I actually did a second simultaneous experiment 3 weeks ago... I took two 1x2 6' strips and glued & screwed them together to make a 2"x2"x6' homemade glulam. It warped into a graceful arc that would be pretty if it were intentional, but unfortunately renders it unusable for its intended purpose (a straight 1.5" x 1.5" x 6' board, to replace the original PT 2x2s that all eventually warped and bowed at one or both ends)

I'm definitely open to other suggestions, if anybody can think of a better alternative to standard 2x4x16 PT studs. I looked at cellular PVC, but the ones I found were either a) not strong enough to support their own weight aross a 10-foot span without sagging, or b) so breathtakingly expensive, I didn't even get to the point of investigating their sag-resistance.

As far as cost goes, I can live with spending 2-3 times as much as I'd have spent on regular pressure-treated 16' 2x4s if I can feel confident that they'll look good for at least 8-10 years.

Re the suggestion to use cedar. Home Depot can order it, and the nominal price per board isn't bad... until they hit you with a $79 surcharge for lumber special orders under $700, which completely nukes the economics of buying 10 boards, and risks total expense meltdown if I ended up having to place a second order to get a few more.

Other ideas I'm currently exploring (but not really satisfied with):

Yeah, I'm at that dangerous, frustrated point where I'm roaming Home Depot looking for anything I can creatively repurpose as an exoskeleton to brace a 2x4... vinyl trim strips, steel stud tracks... ;-)

Re the suggestion to reduce the span. In theory, I could possibly add a third pair of horizontal beams parallel to (and halfway between) the existing two and reduce the unsupported span from 10' down to about 4.5'. Two problems, though: 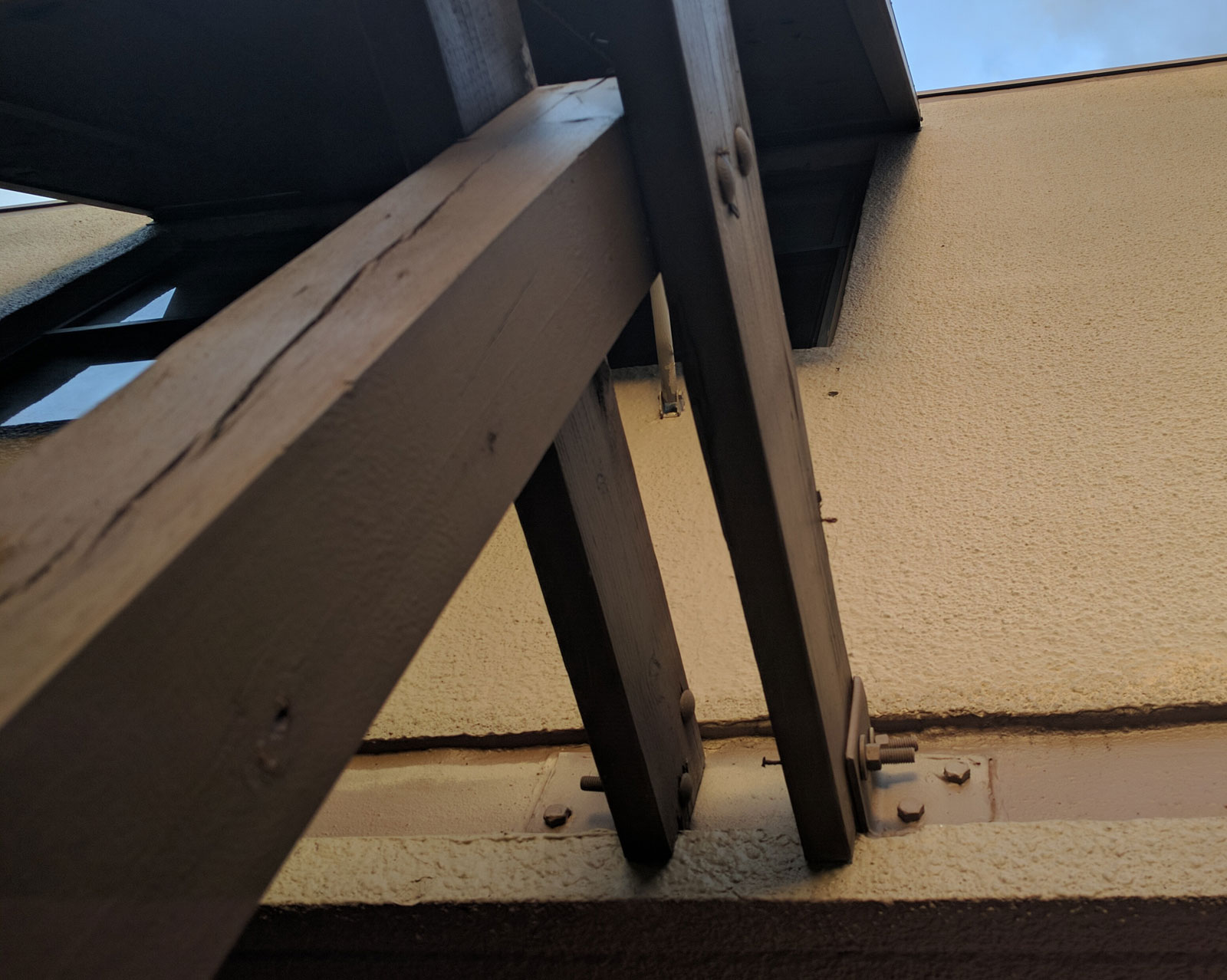 The frame of the pergola after I removed the warped boards 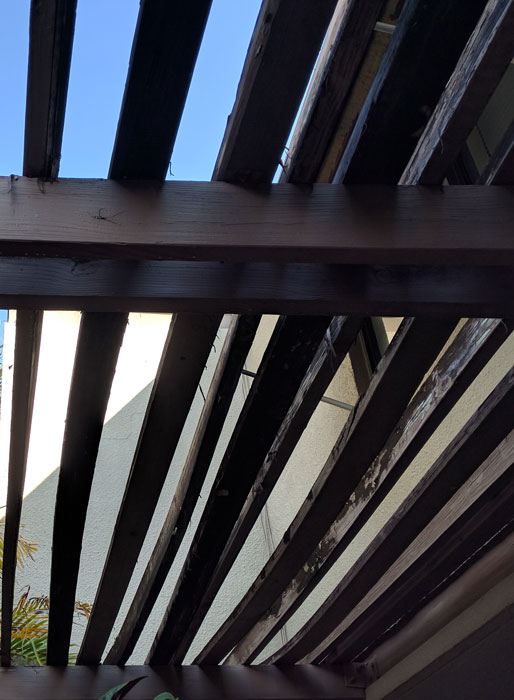 The problem isn't that there's anything wrong with PT 2x4s. The problem is that you're spanning 10 feet with, presumably, no support or bracing. A 2x6 is much more appropriate for what you're doing.

Another option would be to stick with 2x4s and run boards the other direction, maybe less often or maybe using smaller lumber, to create a grid structure. This would be stiffer and resist warpage better.

LVL lumber, like any laminated wood product, will eventually come apart if exposed to the cycles of weather. It's also not substantially stiffer than solid wood for your purposes.

(P.S. Those aren't "studs", which isn't a fancy word for all 2x4s. Studs are a vertical wall component.)

I think one would use redwood or cedar for a pergola exposed to the weather.

I'd use vertical grain 2x4 cedar or redwood kiln dried down to 6-8% (interior standards).

The problems: 1) pressure treatment: I would NOT use pressure treated material. they are adding liquid to the member...which creates more drying out and more warping, and 2) larger boards (use 2x6's rather than 2x4's) which will twist more than smaller boards as more moisture will need to be removed, (incidentally, increasing the width might help, but increasing the depth is exactly the wrong thing to do), and 3) using lvl boards: while dimensionally stable, they are susceptible to delaminating if not "perfectly" maintained., and 4) grade: Using vertical grain material will reduce warping. (Go to lumberyard and hand-pick each piece out...don't rely on bulk delivery.) and 5) moisture content: the single biggest factor to keeping the members straight and true. Make sure the lumber is dried to 6-8% or so (unless you live in a high relative humidity area). Ideally, it would be great if you could "acclimate" the wood too. However, you run the risk of it twisting if not "held" correctly during the acclimation period. However, as the relative humidity changes, the board will gain/lose moisture and therefore grow/shrink/warp.

Staining or painting will slow the drying-out/warping process.

I personally think you are over-complicating the situation. You should think less about how to find an engineered product (Such as LVL and PVL) to solve the problem and instead look at why the wood itself bends and twists. Wood will in itself act in line with its grain and organic structural make up. The biggest factor in how a piece of wood 'settles' into its shape is if it contains the 'heart.' This is the center of the tree and any piece of wood that contains it will go nuts over time twisting like crazy. Study the grain fluctuation and order wood as 'FOHC' (Free of heart clear) with a larger waste factor and then vet the wood you use avoiding large changes in the grain and you will get a superior result in your product with a much lower price point than going to engineered wood products. I would also say to keep in mind that increasing the amount of wood used by pairing up joists doubles your weight which your structural base may not be engineered to handle and could potentially create a failure point. This means more structural work and everything that comes with it (To include the foundation/footings) which you do not want to mess with. If you want to go nerd nuts on the perfect solution calculate the weight distribution you are looking for and put wood under that load for 30 days. This will tell you how that wood will settle and use the pieces that fit your standards. Understand that the price of LvL and PvL is not the only issue. You have to get framers/electricians/plumbers that understand how those engineered products function and how to build with them. If you cut into 30% from either side of a LVL (Like any uneducated subcontractor would) you totally wreck its structural integrity and ruin any benefit the engineering of the product ever provided. Its not just the product that matters, its how its used. The price point difference to properly use these products you are talking about is 10-15 times material cost + the expertise to know how to work with them. Focus on pragmatic simple solutions and you will end up with a better end result with a lower cost.

2
What kind of board can span 16 ft for a wall pergola
2
Will 2x6 cedar be ok for monkey bar rails?
1
How to attach replacement beams to column when repairing pergola
1
How far can a 2x4 or maybe 2x6 support over a 10' span?
2
How can I reduce flex/sway in my pergola?
1
Joining 2x4 to 4x4 base: angles or regular wood screws?