How do you wire multiple lights and a split receptacle to 3-way switches?

I have two lights and a split receptacle wired like so: 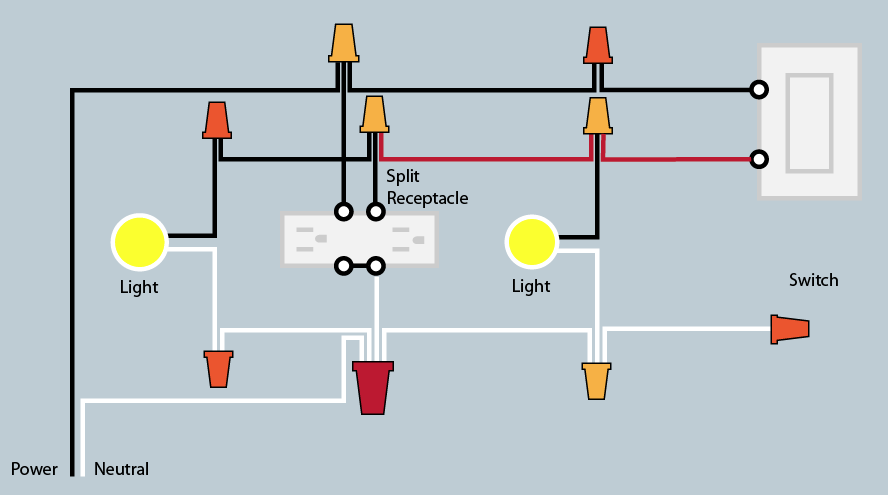 Now I want to wire a second switch into the room, but I'm having trouble working the split receptacle into the mix. I feel as though 3 conductor cable isn't going to cut it. Am I going to have to run more than one cable? Or can this be accomplished using only one cable run between everything?

The switches are going to be at opposite ends of the room from everything.

If the switches you are using are typical switches and not the new techno type gizmos which require neutrals, then all you need to do is replace that switch with a three way switch and add a second three way where you want the second switch to be. Pull a piece of Romex (3 conductor cable with ground) between the two switches.

Use the red and white in that cable as travelers between the (2)- 3 way switches and the black as your switchleg. That black wire in that cable will terminate underneath the black screw at your new switch location but tie into your wire feeding the lights/receptacle ('red wire in your drawing') at your switchbox that you already have in place.

The hot feed (in your drawing above) will terminate underneath the black screw of the three way switch installed at that box.

Remember, put a piece of red or black tape on the white wire in the cable so that others servicing the box down the road will know that white wire is not a neutral wire.

Just do what you're already doing, to one of the switches. Then, run a /3 cable from that switch to the other switch.

At that point, it's the common, standard "both switches on the end of the string" 3-way circuit. Simple enough.

Or, do exactly the above, except -- oh wait. The receptacle. Nevermind.

This idea would work if the second switch is at or past the receptacle. In this case red remains switched-hot, and black-blue become messengers. Feed black/always-hot to the nearer 3-way, past that it carries black-blue/messengers to the other switch, which returns it on red.

It would also work if you could install conduit in that section where the messengers must parallel the always-hot. You can't buy /5, but you can put 5 wires in conduit.

Heck with it. Smart switches.

Since you've done such a nice job of busing always-hot, switched-hot and neutral, this situation is ripe for a pair of smart switches.

You would need a pair that communicates via power-line signaling or by wireless/radio, since you have no spare wires. Unless you'd like to do the kaboodle in /4, and use blue for the signaling wire.

Addendum: What about running 2 parallel Romex cables, i.e. /2 and /3 instead of /5? No, no, no! It is vital that in every condition, the current outbound be in the same single cable as the current returning. AC current emits a formidable, magnetic field pulsing at 50/60Hz (which is how transformers work.) When the outbound current and returning current are in the same cable, these fields substantially cancel each other out. However if they are in different cables, anything between them gets the full brunt. This causes eddy currents and magnetic heating (this is the reason transformers are laminated). Also, EMF is literally electro-motive force, meaning it wants to make things move. (which is how motors work). Two separate cables could move/vibrate/buzz relative to each other, damaging or fatiguing the cables over time.

3
How do I add a receptacle from a switch located on the end run of an existing split receptacle?
2
Wiring diagram to split one circuit for ceiling lights in multiple rooms?
2
How should I wire 2 switches that control 1 light and 1 receptacle?
0
How do I wire mutilple sections of lights with 3 way switches to same power source?
0
Can I split a single nonmetallic cable to multiple lights?
3
Install recessed lights and chandelier with 3-way switches
2
Outlets (top only) and lights wired together with trail wire not working
0
Wire a 3 way switch with lights at both ends
1
How can I get my three-way switches working as they should?