First off I know this is not the best idea.

To start my 200 Amp Main has suffered a partial failure and as it is old (60s) and unusual it will be very hard or impossible to replace it. Since the main breaker has failed only half of my breakers are working as only one of the hot lines from it is supplying power to the breaker box and so basically every other breaker is working.

This means of course that any double pole breakers will not work.

Can anyone explain to me how to do this for a quick fix as my real fix will require a complete new breaker box and so on. 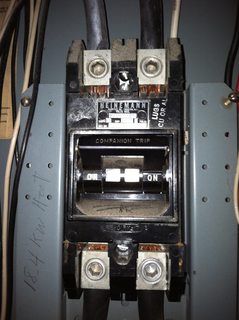 You cannot get 220VAC from one leg in your panel. You must have two isolated 120VAC legs to do this. Using two single pole breakers on one leg will still only give you 120VAC.

Why can't you have the main breaker replaced? You should be able to buy a replacement breaker without replacing the whole panel. Also, have you tried manually setting the magnets in the main breaker? This is done by removing it and slamming it hard down on all axis. This will sometimes physically reset the magnets in their proper position within the breaker and restore normal operation. They can sometimes be jarred out of position when tripped. But since you have to remove the breaker to do this trick, you might as well replace it with a fresh new one.

Not an answer, @shirlock homes got the answer right. This is for the replacement breaker. Do a google search on UQFB200, a breaker made by Milbank. It has been around forever (early 60's?) and looks like your Heinemann. Forget about Cutler Hammer having it. Hopefully you can read the specs to compare measurement, but if you measure, keep your hands out of it and use nothing conductive!!!

REMEMBER YOU ARE RISKING YOUR LIFE ANYTIME YOU MESS WITH AN OPEN PANEL OR OPEN LUGS LIKE ON THE BREAKER. EVEN IF THE POWER IS OFF ALWAYS ACT AS IF THE POWER IS ON. If you cannot measure SAFELY show the picture to the electrician and he can figure it out. 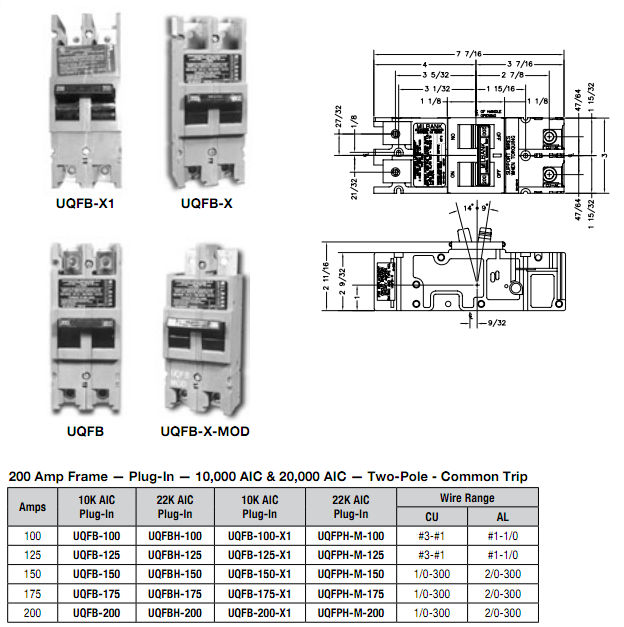 Odd as it might sound, you could run the water heater on 120 volts. Based on the amperage you stated, it would be a common 4500 watt heater. At 120 volts instead of 240 volts (which as explain in previous answers you simply do not have), it will be effectively a 1125 watt heater (half the amps times half the volts). It will take up to 4 times as long to recover. Today's heaters are well insulated and should be able to reach a reasonable temperature even at the low wattage. You might add some extra insulation if the outside feels warm.

When I was in college, I moved into an apartment where the gas water heater was shut off and only had a lit pilot. I merely noticed it was taking a very long time to recover (nearly all day). But it was enough to shower once a day. I did this for 3 months before finding out that it was never running the main burner. Running the electrical elements on half voltage should be better than a pilot.

I'm also concerned about adding extra load to the remaining side of your panel. That could easily cause the crippled main breaker to completely fail. We don't know why it failed on one side. Why would that trouble not also exist on the other? This is something that needs fixed sooner, not later. These larger breakers are often similarly sized and a new one from another manufacturer may fit (have an electrician do that work). The connections in your photo are what is common in separate large breakers.

The hot water heater's recovery time, which is the time required to heat up the hot water used, will be about 4 times longer than if it were hooked up to 240 volts.

One could also replace the elements in the hot water heater with 120 volt elements. My local hardware store sells a 120 volt 1650 watt element for about $20. Use a 20 amp breaker. Replace both elements, upper and lower. Make sure you save the 240 volt elements to use when you solve your main breaker problem.

You could use a step-up transformer to increase the voltage (the opposite of what North Americans do when they go to Europe), however by the time you do this, you may as well just fix the actual problem. Residential main panels are inexpensive but there is a bit of labour involved to swap it out, and you usually need a licensed electrician do this work.

Not the answer you're looking for? Browse other questions tagged electrical circuit-breaker breaker-box or ask your own question.

1
Installing and connecting an outside generator power inlet box
0
Water Heater electrical installation to breaker box
0
Why is part of a circuit without power after an applicance short?
0
Do I need to add a circuit breaker to the outdoor panel that powers my RV?
0
Changing 220 to 110
2
Can I add a second 100A service panel alongside the existing one on the same feeder lines?
10
20 Amp single receptacle on two 15 amp breakers?
2
220 to 110 in subpanel with no neutral