Is it OK if the house's roof makes noise

I moved from Europe to the USA(OH). I noticed a couple of things that worry me. Every house in the US that I entered makes cracking or squeaking noise. I never experienced this in Europe buildings. I just need reassurance this is normal and safe. I'm not trying to judge or say something is better or worse.

Last night we had high winds and the whole house was making this noise. The roof is made of wooden rafters. Something like this: 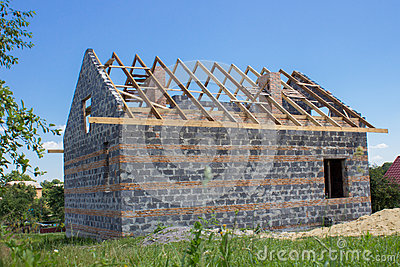 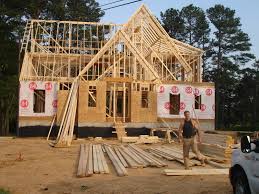 The wooden beams look much thinner compared to the ones used in Europe, see img below: 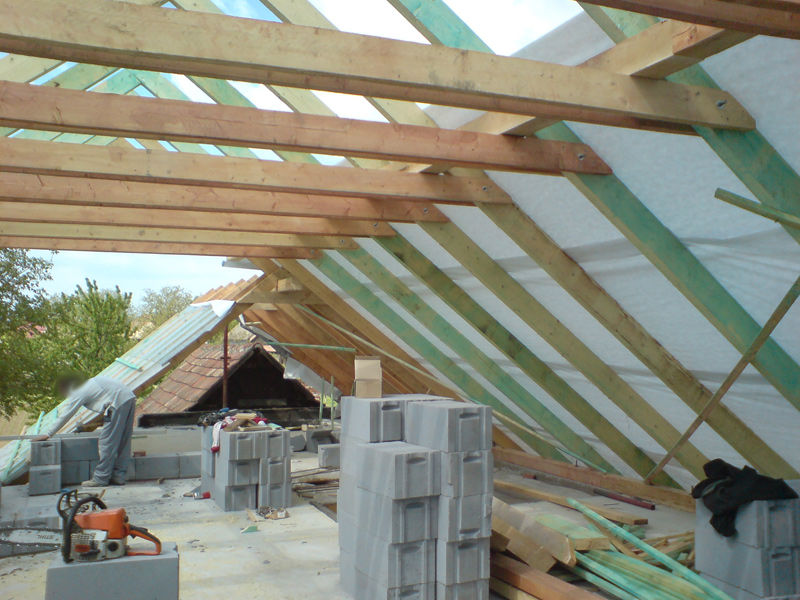 The house will end up looking something like this: 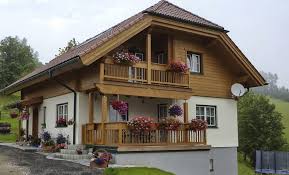 I actuallly lived in a house that looked similar to this one below: 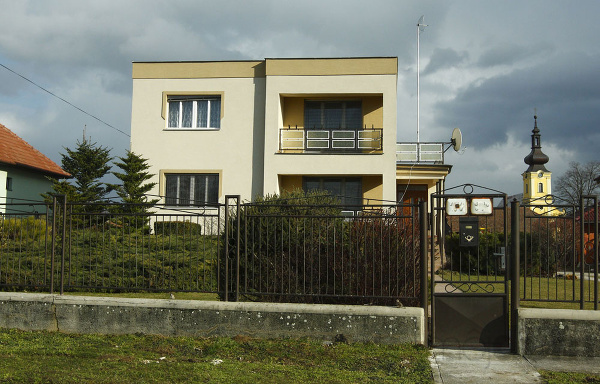 I never experienced this house making any noise, wasn't even able to hear the wind outside.

My question is: Is it normal that the houses constantly make cracking noises when temperature changes or winds are present. Is there anything I can do to fix this issue? Is it safe and can these wooden framed houses withstand high winds, tornados? Especially the roof? The funny thing is that the house I live in now is pretty old(1945) the only thing that is between the roof studs and second floor is drywall. If a tornado rips the roof the drywall would fly away like paper. The house doesn't have a basement so I can't hide anywhere. Why there is no more demand from the public to build houses that don't make cracking and squeaking noise?

Roof construction varies depending on where you live. In the north you need to build to contend with a heavy snow load so roof trusses are more numerous and stronger. Sothern climes, not so much. Further, the roof cladding makes a difference. Many roofs in Europe are covered with tile or slate, which is heavy and needs the extra support.

All buildings will creak and groan to some extent in the wind even steel high-rises. Though you may not notice in stronger buildings.

As for tornadoes.... If the roof blows off.. the drywall wont matter.

In some cases, wood frame is actually better than say brick. A wood frame house will creak and groan and bend, but except in the strongest wind, will not, if constructed correctly, catastrophically fail like a brick or cinder build building. In hurricane areas you will often find the timber frame buildings still standing surrounded by piles of rubble. Same goes for earthquake regions.

One more thing though. Creaking and growning is ok... Banging is not and is an indication that a roof panel has come away from its fastening and should be corrected immediately.

In a word--money. Wood frame stud construction has been the norm in the US for mass housing for a long time, and I am given to understand that newer houses in the UK are being built this way. It is much cheaper than the heavy timber and 'stone built' constructions which have been the standard construction techniques in Europe for centuries. Stud wall construction can be constructed by carpenters of varying skill levels, whereas traditional European techniques require the abilities of skilled craftsmen.

From what I hear most people of modest means in Europe do not 'own' a fully-detached house or even a semi-detached one (in the US one half of a duplex). Home ownership is seemingly more important in the US and to achieve this cheaper construction was called for.

Edit Roof construction is 'stick built' or trusses or a combination.

On my bike ride today I looked at a house under construction in a neighborhood we could have bought in 39 years ago. There was a rail track right behind the house we looked at with freight trains going through at all hours; we passed. This was a tract development of light duty single story houses <2500 sq ft on 16,000 sq ft lots. Ten years after we looked, the rail line was taken out and it is now slated for a bike path.

The original houses (~ $65k in 1978) are now going for $500k to $600k for the lots. The new houses are two-story >6000 sq ft well designed and constructed. The permit on the house I looked today stated value of the construction $554k for 6400 sq ft. The outside studs were 2x6 and the walls were fully sheathed in OSB. High ceilings and a tremendous amount of 2 x lumber. Roof stick built with ridge beam and collar ties every other rafter. Demonstration panel indicates cladding will be a mixture of brick and stainless steel (scratches show shiny metal) panels with a grey finish. Roof will be standing-seam metal. There is a lot of quality construction in the US today.

Edit more In looking at this 6400 sq ft house yesterday I saw a lot of joist hangers, but I did not see what are sometimes called 'hurricane ties' (metal strapping tying roof rafters to wall studs. I am sure this is not required by our local code, but it would seem to be a sensible enhancement to a stud wall structure.

Twelve years ago I talked to guy who was having a new house constructed in a 'boom town' suburb north of Dallas proper. He wanted his builder to add Simpson Strong Tie connectors, but the builder resisted saying it would greatly increase the cost, complicate construction, was not in the contract . . . The owner persisted and himself purchased all the connectors he wanted. The builder grumbled but installed them, and in the end the builder said it wasn't that much extra work.

Not the answer you're looking for? Browse other questions tagged roof old-house wind or ask your own question.

0
What would cause my shower water to start hot and then, after a minute, settle on warm water?

21
What is the safe/correct way to work on gutters? From a ladder or from the roof?
1
How to flash a roof valley on parallel roofs
0
Can I remove a furnace compartment vent that's obstructing roof repair?
0
Roof Safety: how to clean gutters on high steep roof?
3
Asbestos risk in my roof? What is this material?
0
Water dripping from soffit - problem with the gutter, roof, or something else?
0
Possible water in wall from a roof leak
2
How would you frame this chimney chase?