I'm running new wiring to add receptacles in an attached garage. I have attic access above the garage and have been drilling down into the top plate into the cavity where the receptacle will go and fishing the wire from above. I came across this section where the top plate is gone, and in its place is some metal flashing and a hollow cavity. 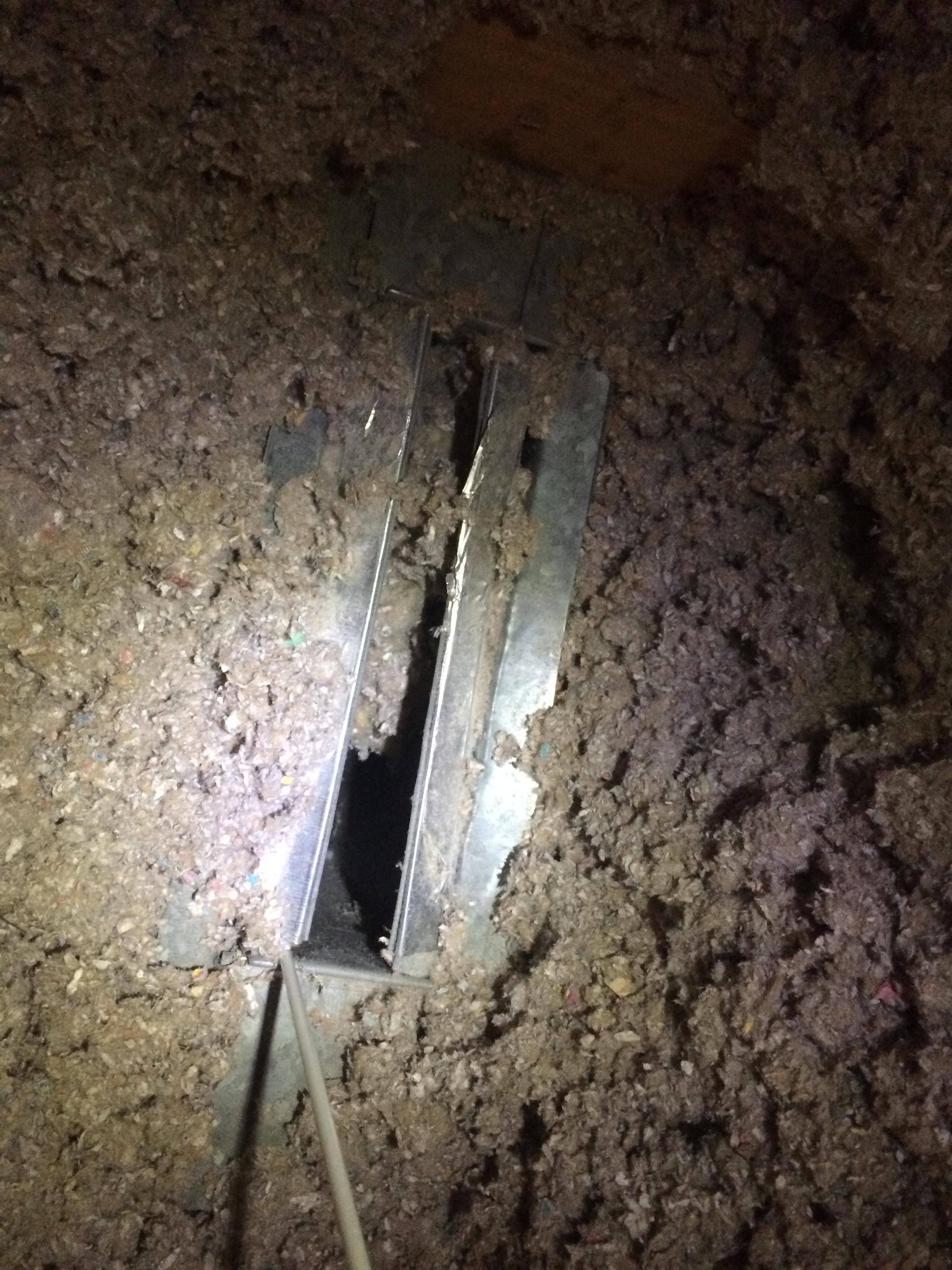 It's about 10" across, and When I dropped a fish pole down the cavity it went down about 29". Tapping the fish pole, it sounds like the bottom is metal. There doesn't appear to be anything in this space (besides some of the blow-in insulation). There is a fire block in the wall, but it's about 10" further down.

The wall is shared with the kitchen on the inside of the house, but there isn't anything in that area except a wire between a couple outlets in the kitchen, about 14" further down than the bottom of this cavity.

The kitchen was remodeled at least once since the house was built, but that was before we bought it, so I'm not sure how the kitchen used to be laid out. For what it's worth, it was built in 1984, in Northern Virginia.

It's right above where I planned to put a receptacle, and I've already cut the hole for the work box. Can I just drill through the bottom?

At one time that metal piece was probably part of a vent pipe to transition a range hood up through the ceiling. If it had been in use there was likely to have been a rectangular to round transition that then piped out through a shrouded roof vent.

Just drilling a hole through the bottom of that metal piece may require a special treatment such as a grommet to protect the electrical wire from the sharp metal edges.

Not the answer you're looking for? Browse other questions tagged electrical wiring hvac walls or ask your own question.

4
Finding the cause of a tripping breaker
3
What is this switch plate cover with a pyramidal bulge across the top of the plate?
0
Removing a wall to the ceiling / roof
5
What is this metal bar in my 1950s electrical box?
0
How to run cable from attic inside an external brick wall?
2
How can I route a cable around a floor joist over a wall?
2
What's this metal thing in my wall where the studs should be, and how do I put a shelf on it?
1
What wall cladding should be used along the floor of the garage?
12
Should I run outlet circuits through the studs or up and along the top plates?