How do I crimp an F-connector onto RG-6 cable?

My current home project is putting RG-6 in the walls instead of through the cold-air returns and across the carpet between rooms. Thanks to some forethought during previous remodeling projects, laying the cable and getting it in the walls is the easy part.

Right now, I am stuck on crimping the stuff.

I bought a crimper, a 50 pack of F-connectors, and a 500' box of quad-shield RG-6. No matter what I do, the connectors slide off the end after crimping. I followed the instructions that came with the crimper, googled, watched some youtube videos, but nothing seems to work.

What I do is strip off 1/4 inch around the inner connector, then an additional 1/4 inch of the outer sheath. Inside there is foil and what I can best describe as tinsel. I fold this back, leaving the inner layer of foil on the plastic insulation. I then push on the F connector, using my channel-lock to grip it while pushing.

The problem is that it appears not to slide all the way on. The connector has two circular parts, and it looks like the inner one is supposed to go between two layers of the cable. However, it barely goes in and it starts pushing and distorting the outer layer before it just won't go anymore.

If I crimp it at this point, it doesn't have anything to hold on to and it slides right off. I can also see some of the foil and metal sticking out from underneath the connector, leading me to believe it is not on all the way.

What am I doing wrong?

Edit: the issue was I was using dual-shield connectors with quad-shield cable. At first I thought they would work with both, but I checked the package again and I was wrong. However, I chose to pick the answer to use compression connectors since I went that route and it really was a lot easier with better results.

Edit: here is what I bought. I'm planning on buying compression tools and trying that instead. 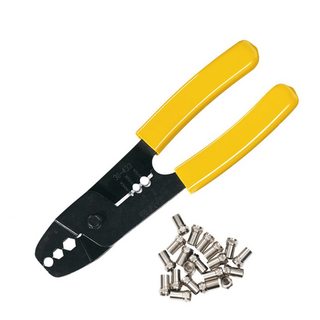 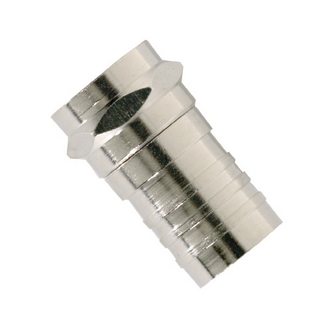 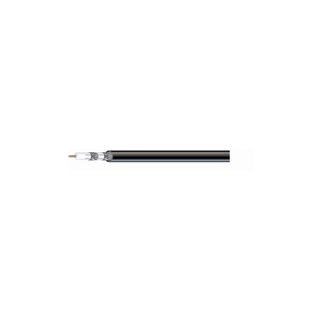 I have the same problem with the two piece, so I use the compression type. They cost more money, but they are simply worth it. I've never had one pull off. 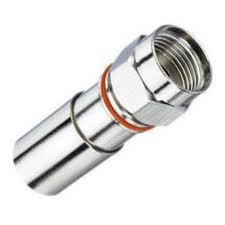 This is the style most cable and satellite companies use. 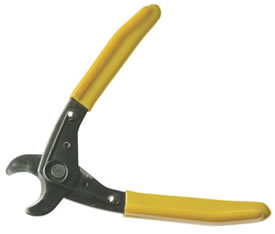 Never use electrical diagonal cutters or dykes to cut cable. They flatten out the end. Use cutters like this. 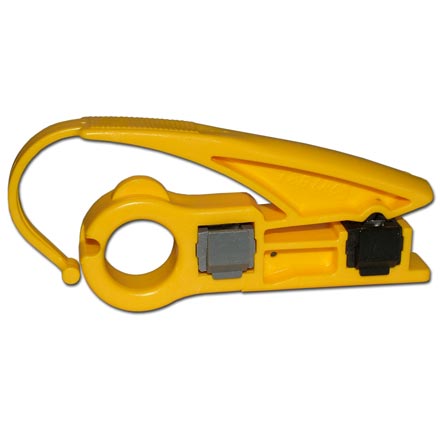 Always use a good cable stripper, never use a razor knife. You never want to nick the inner copper wire. 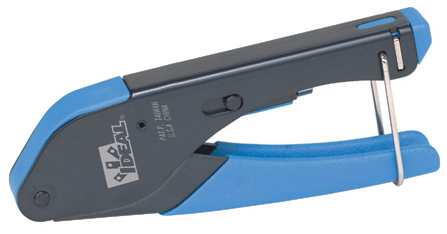 The compression connector can run as high as $200.00. I've seen this economy compression tool at Lowes for under $25.00 and it includes a hand full of connectors.

I can't say you will never have problems with them. but I've never had a problem with ghosts or snow on my tv's since I started using these tools.

Added Please remember for every splice or connector you loose around 25%, or it could be worse for bad connections. Don't daisy chain connections.

While I agree with the other answer about using a compression tool , and the other tips provided, it sounds like your issue is mainly getting the connector properly onto the coax.

With higher-end cable, the connectors usually go on pretty easily, but I've found some cheaper cable to be a bit stubborn. Or sometimes it is cold and your hands hurt and you just can't eaisly push on the connector.

For these scenarios, they make tools which have a male end on it which you screw the connector onto, and then use to push it onto the cable, down past the inner layers of the cable.

This particular tool also has 2 ends for flaring the cable, though I've never personally needed to do that. 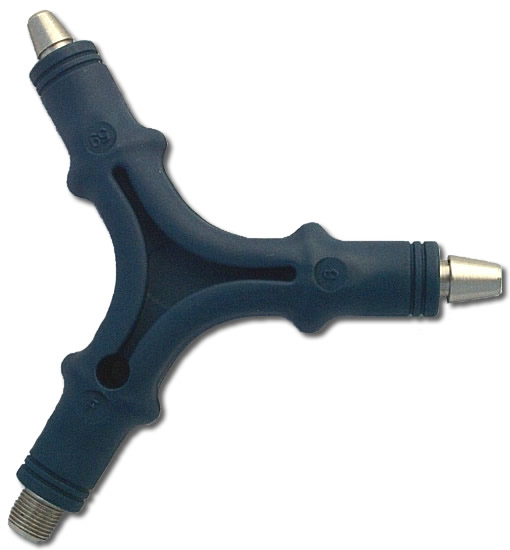 I'm not really sure what connectors you are using, but it is possible you have a mismatch between the cable and connector. Usually the bare center conductor needs to be about 1/2" long (can be trimmed after install if too long), then about 1/4" of center conductor insulation exposed, followed by stripping apx 1/2" of outer insulation. The inner most barrel of the connector should fit under ALL the foils and ground braid, thus sandwiching the shielding and foils between the two metal sleeves of the connector. Some connectors only want to crimp the shields within the connector while others require that the outer insulation be sandwiched with the shields before crimping. It almost sounds to me that your cable is a bit too large in diameter for the outer insulation to fit comfortably between the two sleeves before crimping, perhaps because you have premium shielded cable and connectors for single braid shielding cable.

An other option are the new twist on type connectors from Ideal. They have a diagram of how to prep the cable, then simply insert the end of the cable and twist until tight. I have used them a lot lately with good results.

To be honest, I'm guessing here as I can't see what you have for the deminsional specs of the wire and connector.

5
How to add another network cable?
1
Can you crimp a tubular lug without a crimper plier?
32
How to future-proof a long cable run
1
How to use Ideal 92-650 F connectors on RG-6 quad shield cable?
4
Safest Way to Contain Spliced Lamp Cord
17
How do you push a cable through a standard conduit inside the wall?
4
how to properly remove these cable connectors
3
How can I get bulk riser cable back into the box?
0
Identify this 12 wire cable
1
Run a Tunnel on existing Comcast cable?