Is it safe to combine 2, single pole 20 amp circuits?

A few years ago a contractor added two 20 amp lines from the breaker box to a knee wall on the second floor where they terminated in a junction box. They were put there for future use in a central AC system.

We did add central air eventually but those 20 amp lines weren't used (so I thought). I was going to connect to one of those lines the other day so I could add an outlet to a wall without any, and noticed that inside the junction box those 2 lines were connected and powering a 12 awg wire which I haven't traced yet.

Is it safe to have those 2 separate 20 amp lines, each on separate single pole breakers, connected to each other? Does that connection create 240v but still at 20 amps?

Here's a photo of the junction box: 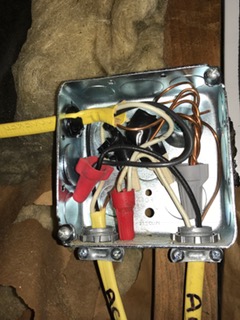 Depending on how it's connected, and how the breakers are oriented in the panel. Yes, it could provide a 240V 20A circuit.

If this is how it's being used, then the breakers should have their handles tied together.

It would never be legal to use two separate Romex cables as part of a single circuit. That is because conductors must be kept tight to each other so their magnetic fields cancel each other out. Without it, you induce eddy currents and heating into anything between, like the Romex staple. That would see 20 ampere-turns of EMF, and if that doesn't seem like anything, it only takes 8-10 ampere-turns to operate a reed switch.

If you needed plain 240V, you can use a single 12/2 and re-task the neutral to be the other hot. Mark it with tape or paint to show it's not a neutral.

Most 240V air conditioners do not need or want neutral.

In your photo, it appears the lower left Romex is disconnected. The neutral is stripped and ends in the upper right corner of the box, and the hot has a white wire-nut taped onto it (which is good practice as wire-nuts don't like to hold onto a single wire). The ground splice has the right number of wires on it. The work looks fine, though I'd have capped the neutral. Neutral is not ground.

0
Code Question in regards to 120V / 20 amps
4
2 circuits connected in one box?
4
Can a 15 amp and 20 amp share a ground?
0
Connecting circuit with two hots to breaker(s)
1
Multiple switched circuits in single exposed raceway with T-style conduit body to branch them
2
Can I connect 12 AWG wire to 10 AWG in a junction box?
3
30 Amp Cooktop on 40 Amp Breaker
3
Adding wires to EMT conduit to add circuits
2
40 amp range outlet as extension cord source
1
Concerned about 3 circuits interconnected in 1 box