Wiring up a ceiling light with earth cable

I'm changing a light fixture in my kitchen. It's something I've done plenty of times but this one keeps on tripping my circuit breaker fuse, cutting power to all my downstairs lights.

The only difference I can see with this setup to all the others I've done myself is the light itself has an earth wire whereas all the other lights only have live and neutral.

My ceiling rose is a loop circuit which has 3 of each coloured cable. Brown for live, Blue for neutral and Green & Yellow striped for earth.

The light itself is a 5 arm ceiling light. It has one brown wire, one blue wire and one green/yellow wire. It then has a second green/yellow wire connected to dome that hides the wires in the ceiling (because its metal).

So I'm connecting blue to blue, brown to brown and both green/yellow all to to the right place but it just trips the fuse as soon as I turn the electric back on (even if the light switch is off).

I've tested the light by wiring it up to a plug and running it from a wall socket and it works fine! And when the light isn't in the ceiling, the fuse doesn't trip.

What am I doing wrong? Should I be doing something else with this earth wire? I've never seen a light with an earth wire before (except for the ground wire connected to metal fixtures)

Edit: I think I may have found a problem! I was taking some photos for you and it looks like one of the live wires is melted. I'll attach the photos for you. Please note I did not install the ceiling roses. They were there when I moved in. I just put my light fittings on them. They look quite old and it may be hard for you to see because it seems quite "cramped" in there.

If the live wire is indeed melted does this mean the light is too powerful and has overloaded it? I'm guessing this is going to need to be replaced now? 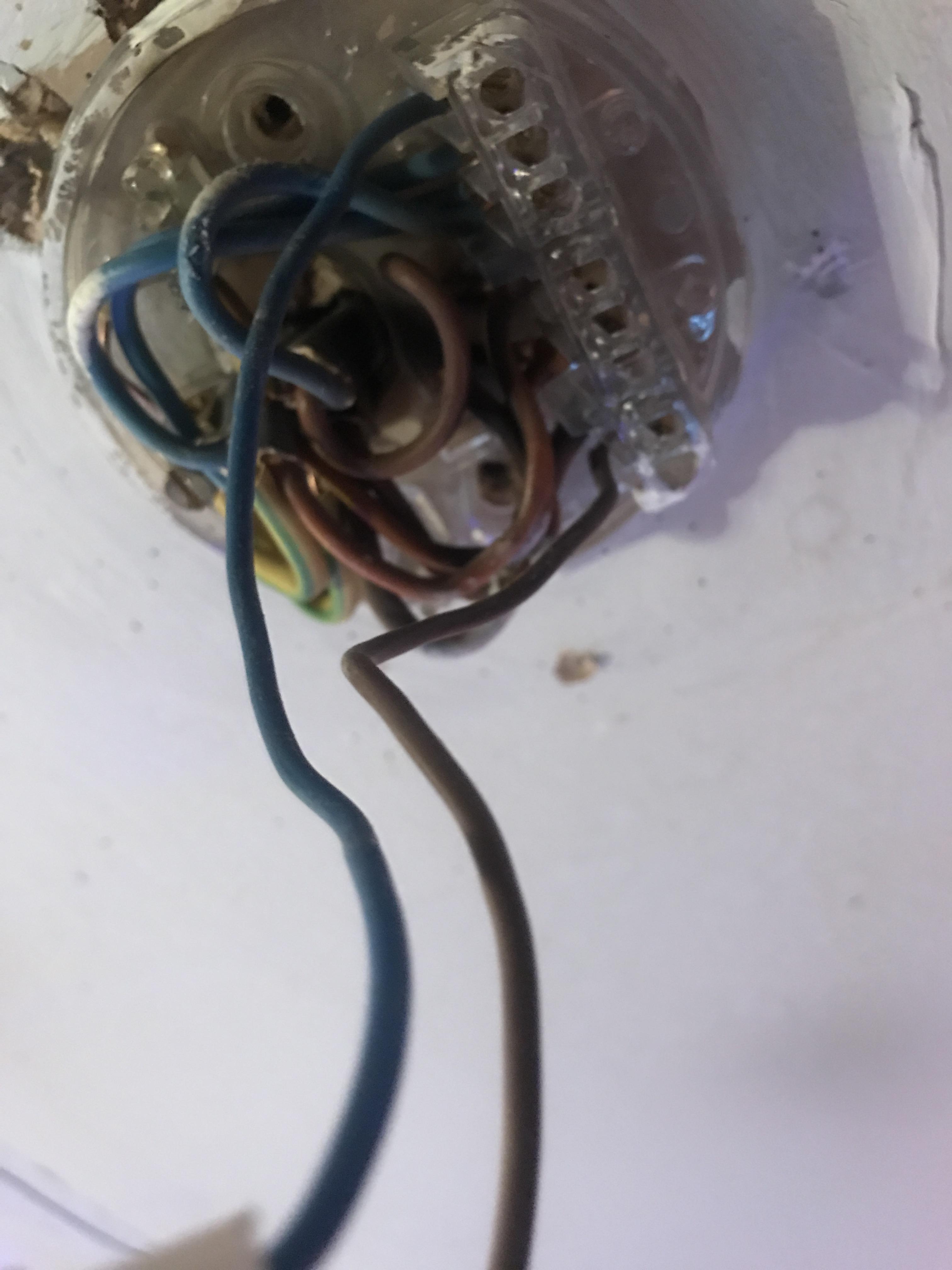 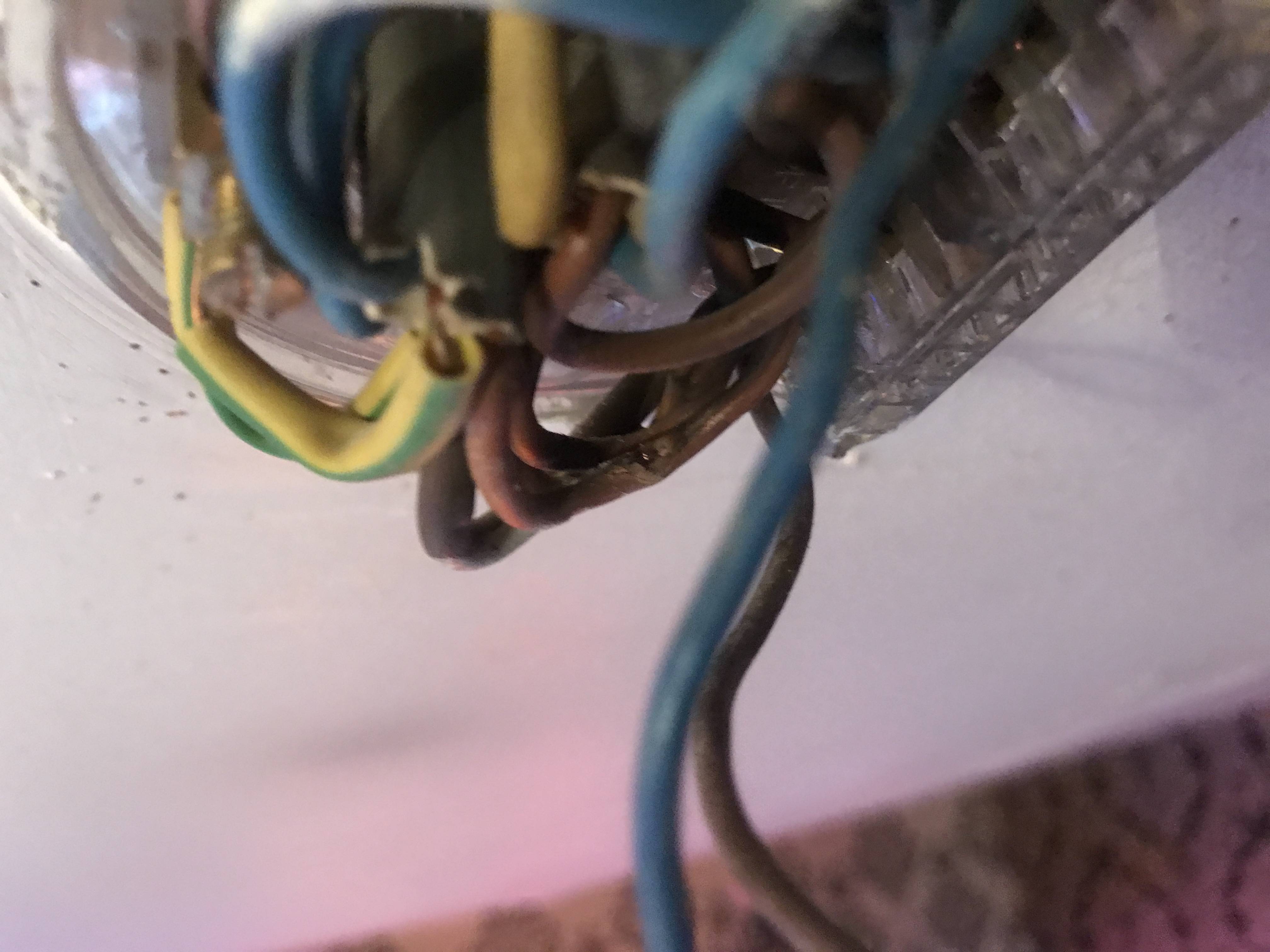 The light itself is a 5 arm ceiling light ... I've never seen a light with an earth wire before

If it has any exposed conductive parts, they need to be earthed. Maybe the arms are metal?

What am I doing wrong?

You have probably mis-wired the ceiling rose. One of the wires from the switch loop will not be what its colour suggests.

A typical UK ceiling rose is wired like this 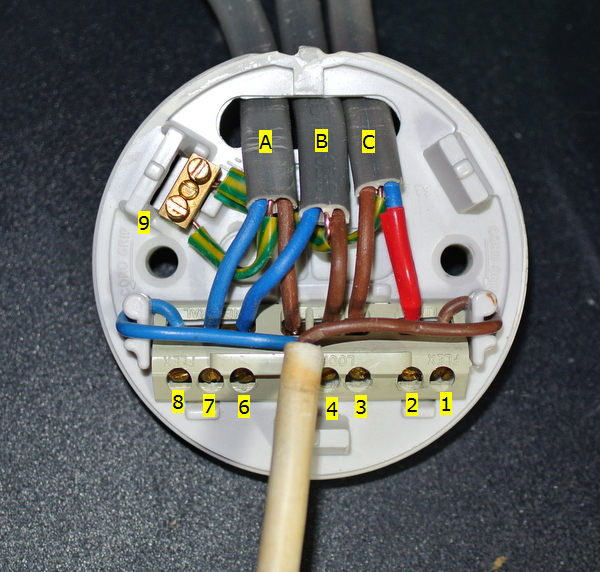 Note the red tape on the blue wire (position 2) to indicate that this is not a neutral, as the blue would suggest, but a switched live.

Since your breaker is tripped regardless of the switch position, you probably have something other than the obvious error that occurs when the tape is missing.

You should not have trouble connecting three or four earth wires to the earth terminal. You can use a connector block if that makes it easier but I believe they must be enclosed in a junction box or in the ceiling rose. There isn't much spare room in a ceiling rose.

The ones on the right are the traditional ones used in the UK, a lighting circuit uses the ones rated 5A. The connectors to the left are Wago 222 and 221 connectors - they make it easier to connect multiple wires together - the leftmost one connects three wires together. There are 2,3 or 5-position versions of each. Wago also make push-in connectors (273 and 773 series) for various numbers of solid-core wires (not stranded). Other manufacturers like Ideal also make them. You can buy these from screwfix and other suppliers.

2
Replacing Light fitting (too many cables?)
0
How to wire LED light to old wiring layout

1
How to wire a ceiling rose?
3
What is the grey wire dangling from my ceiling?
0
How to wire LED light to old wiring layout
0
Wiring a light with both a dimmer and a switch