The problem is how to attached the new light fixture to the existing box given that the holes of the fitting are 0.5" wider than the electric box?

I've tried using an all-purpose crossbar but it doesn't work because the mounting bolts from the new light fixture coincide with the sheetrock cutout for the electric box.

I thought about drilling holes in the new light fixture but think this would be dangerous because the light fixture has wires running between two pieces of metal and I obviously need to avoid drilling into them, also I cannot easily separate the two layers of metal. 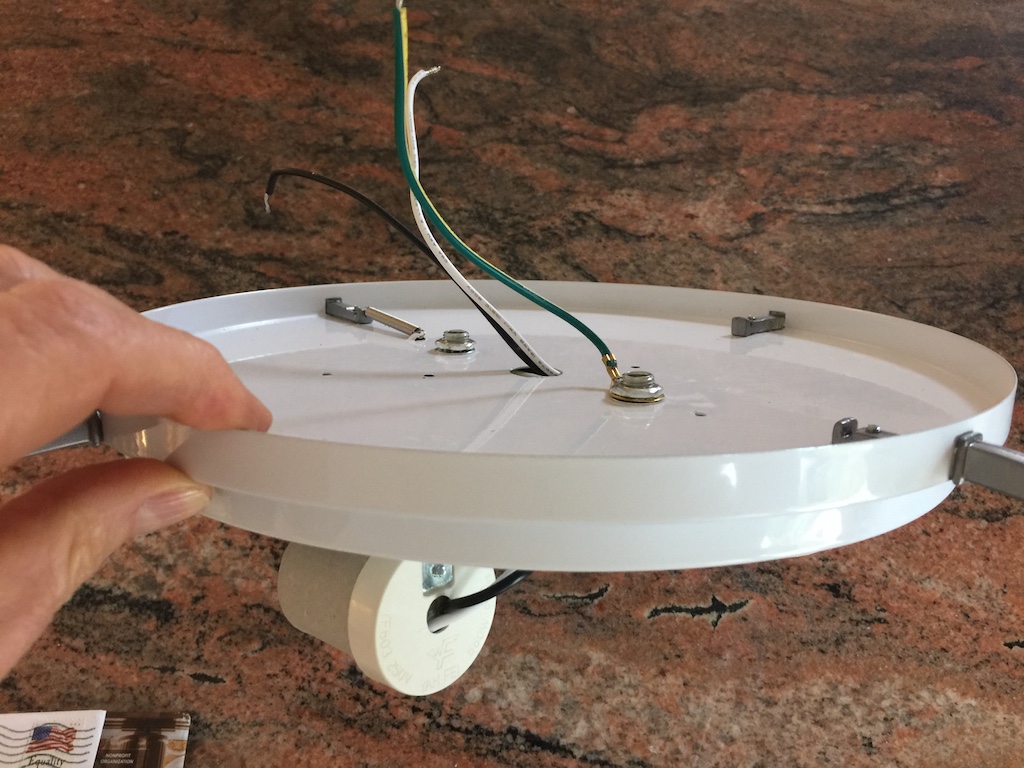 I managed to attach the light fixture using the universal crossbar, but with some improvisation.

The light fixture included two combo truss bolts that were designed to screw into the junction box but this didn't work because of the incompatible sizes(3.5" and 2.75").

The solution was to bolt the crossbar to the junction box and hang the combo truss bolts (to attach the fixture) from the top side of the crossbar, with the bolt heads resting on the top of the cross bar. Then I secured the fixture to the bolts using nuts.

Not perfect but the fixture is stable and secure.

Thanks for your comments guys!

One way to deal with this problem is to install a cross bar that has adaptation from the 2.75" spacing of the electrical box to the spacing on the light fixture plate. In this instance it is expected that the cross bar will stick out below the ceiling sheet rock. What you do is temporarily mount the cross bar to the electrical box and then mark the positions of the wider hole set with a pencil onto the ceiling. Then lower the cross bar away and drill some 1/4" holes in the sheet rock at the marked locations. Then when you come to mount the light fixture its mounting bolts can screw through the ends of the cross bar and stick up into the sheet rock.

Another strategy is to totally replace the electrical box with one of the proper size. This however takes a lot more effort and could be problematic in the case that access to the top side is needed to remove the old box and secure the new one.

Bolt a 1/2 inch deep round "pancake box" to the existing box and then use the mounting holes in the pancake box to attach the new fixture to. The pancake boxes may come in two different sizes, but one will be perfect for your situation. You could paint the exposed edge of the pancake box to match the color of the fixture.

Not the answer you're looking for? Browse other questions tagged wiring ceiling or ask your own question.

1
How can I hang a ceiling fan with a 3/4 inch difference between the junction box and bracket?
2
Confusing ceiling light fixture wiring
2
Ceiling fixture crossbar with 45° rotation
2
Can I install a modern light fixture on this box?
1
How to replace old ceiling fan-light with just a light fixture
0
How to attach ground wire for ceiling fixture, if mounting bracket does not have a green ground screw, and no ground wire coming from junction box?
2
Wiring Help Replacing a Two Switch Ceiling Fan and Light with Only a Single Light Fixture--See Photos