How to wire a switch so that it does not turn off another in the chain? 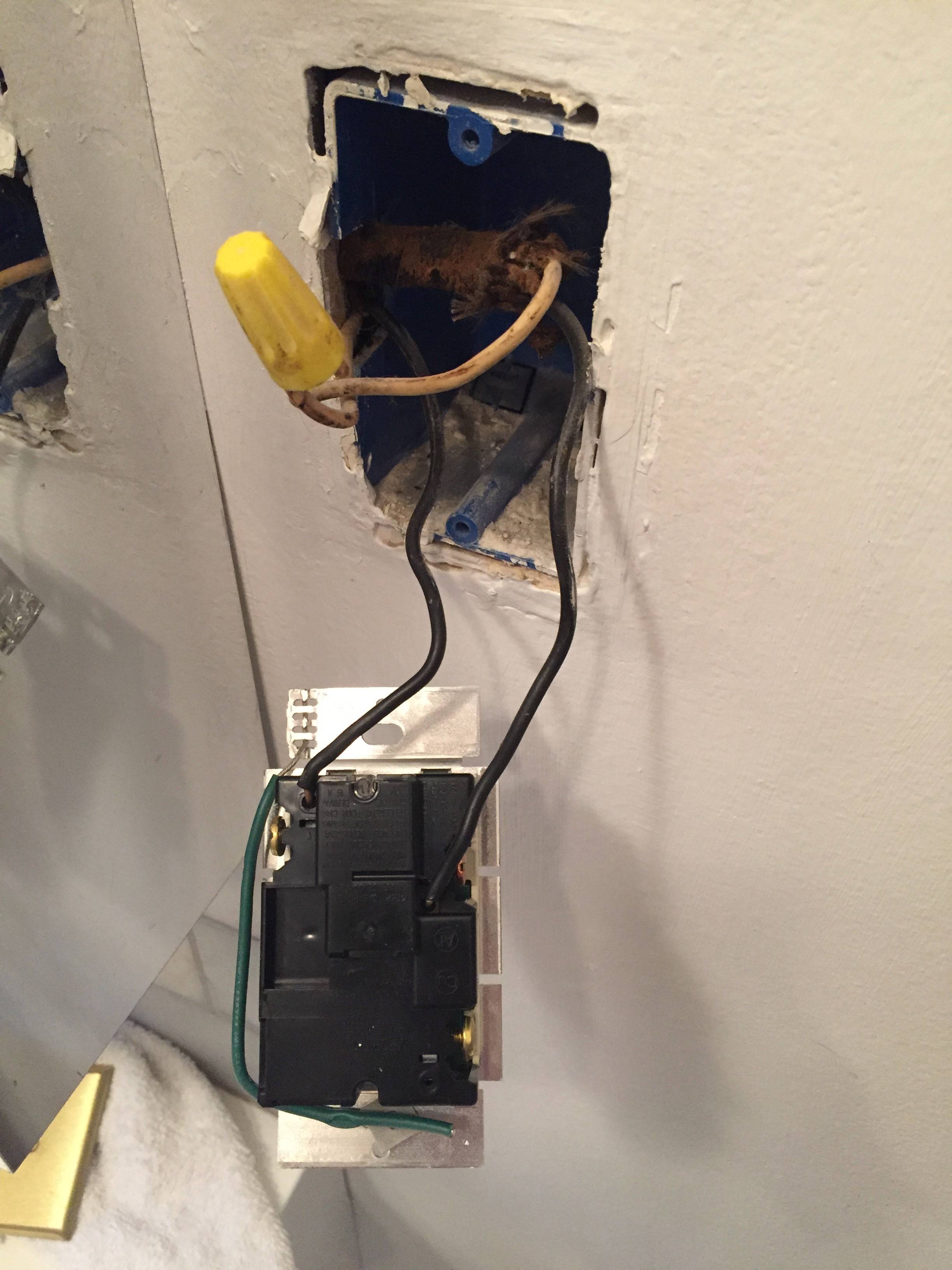 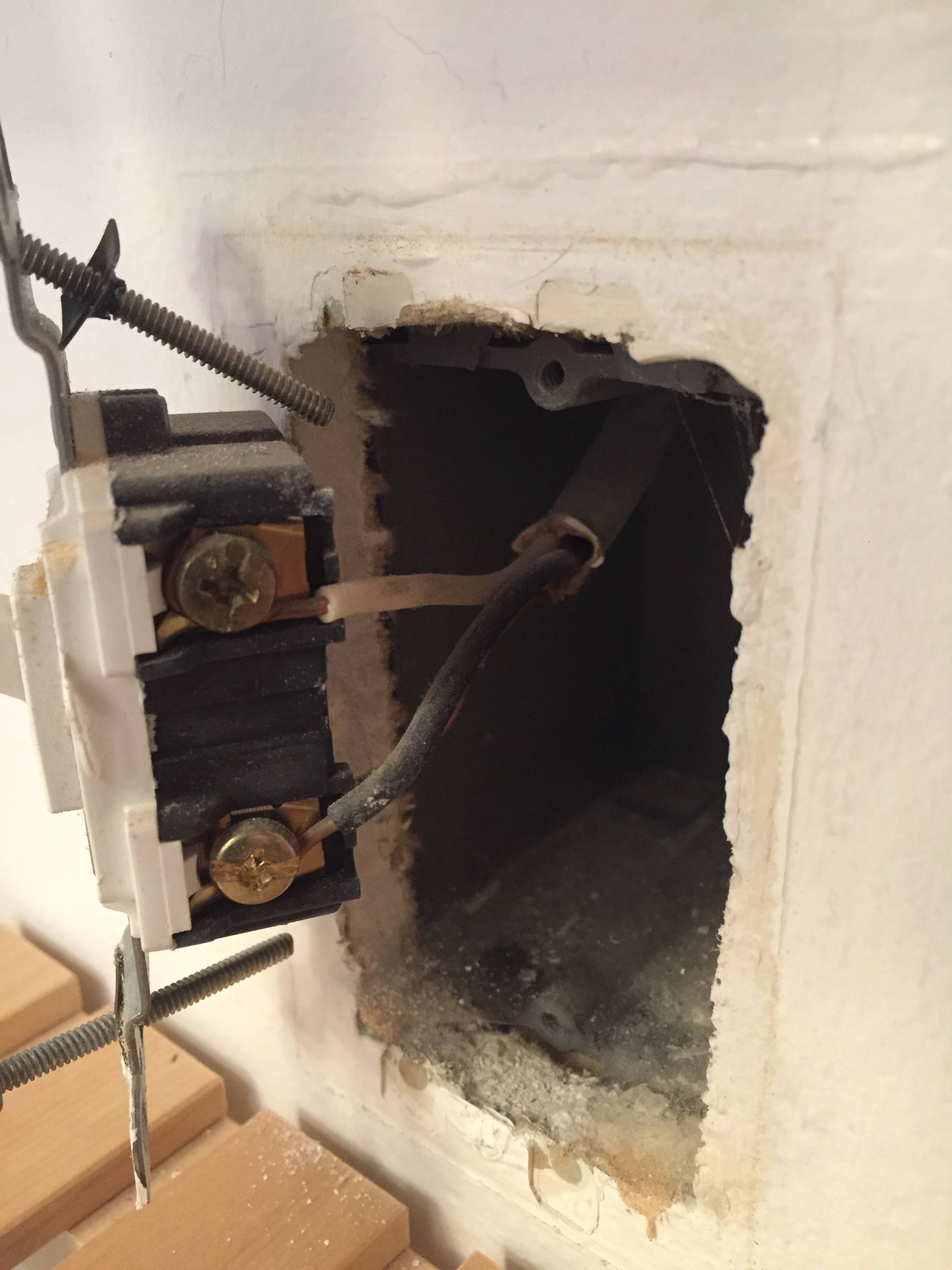 Based on your description, it seems that your fan is wired in one of two ways:

I attempted to use the solid black lines to indicate black insulated wires. Typically, those represent the ungrounded (hot) conductor. The black lines with a white stripe are white wires, typically the neutral (grounded) conductor. Double check your arrangement to make sure you know which wires are which for your case because someone might not have followed convention.

The former case is ideal because it would make rewiring easier (and means that there's never a chance for the fan fixture to be live even when its switch is off).

Here's a diagram showing the status quo and how you would want to rewire it:

Based on the pictures, it seems that you may have the less ideal wiring case. This is dangerous because if the dimmer switch is on but the fan switch is off, the fan fixture is still energized and could represent a hazard if a short occurs.

Here's a diagram, as with case 1, showing the current and rewired circuits:

As before, the red circle indicates a splice that you will need to move. In fact, the final wiring diagram looks nearly identical because the desired outcome is the same no matter how you start. The only difference here is that you will need to add a wire splice where you removed the fan switch from the neutral. In essence, when you remove the switch, you need to close the circuit with a wire splice or you won't have a functional fan at all.

Here's what I think happened. The light was installed first. Then, someone came along and installed the fan, and simply tapped into the wiring at the light. This means that the Fan and the light came on together (Which was common at one time). At some other time, someone who wanted to poop quietly, installed a switch for the fan, and simply interrupted the existing wiring.

The image below, drawn with exceptional care in my high tech electrical drafting software shows in black and grey, what you have. The red line is what you should have. (Electrically speaking - Implementation and Code is a whole different story.) That is, you want to disconnect the black wire running between the light and the switch, and rewire it via a pigtail to the black wire before the dimmer. (HOWEVER!!!! That's a real wiring mess, and it actually shouldn't be done that way -- This is purely an electron flow discussion -- it's a jury-rigged solution)

This is non-trivial, and shouldn't be attempted without knowing what you are doing.

What I would do is turn the power off, and open up the boxes where the light and the fan are installed, and disconnect the fan from the light.

If you are even luckier, you'll be able to run a short piece of Romex from the dimmer box to the switch box.

In the dimmer box, you'll wire all three whites into one nut. Green/Copper to ground (if it exists).

Disconnect the hot black (the one that goes into the braided bundle) and wire-nut it to the black in your new romex, and a short (6 in) piece of black that you've salvaged or pulled out of your excess romex (Use the right guage!) This short piece will go back into the dimmer.

What you have (ignore red) 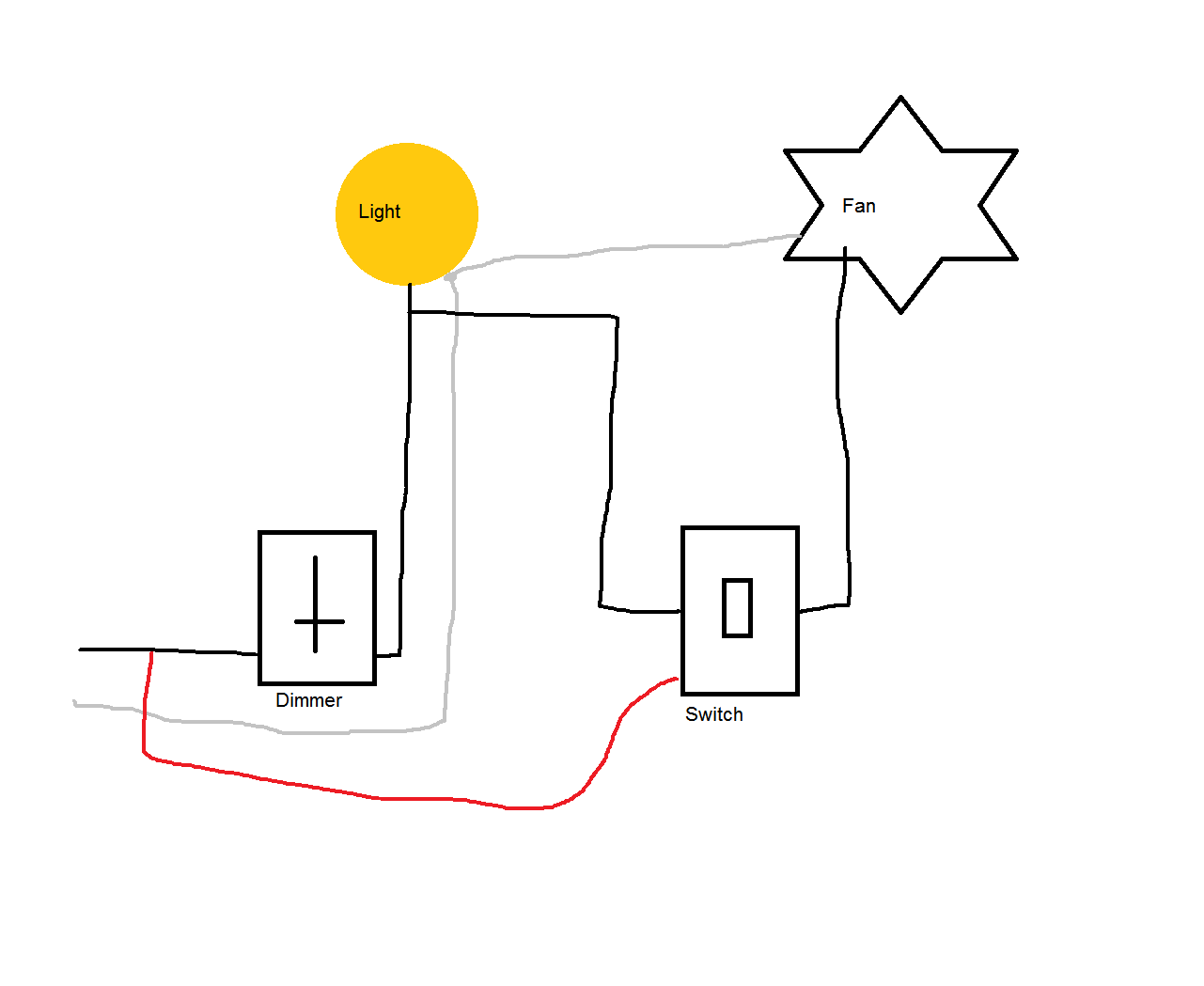 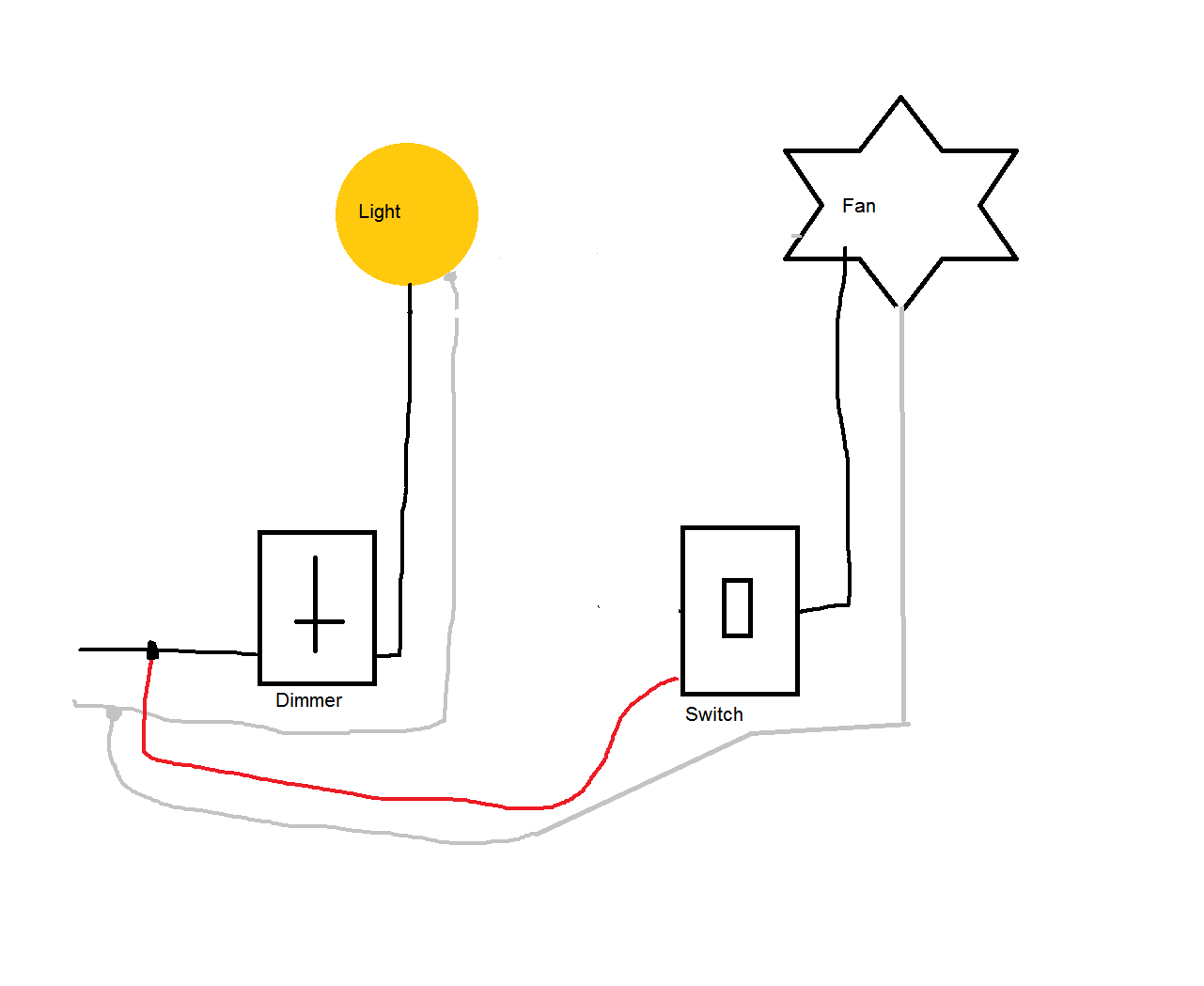 4
Why does my fan switch sometimes turn the lights off?
3
How to identify the purpose of this switch?
3
Dimmer switch is buzzing at one location but not at another
1
3 way dimmer on 4 way circuit
1
How to Wire New 1 Way Switch From 2 Existing 3 Way Switches
0
Is there a dimmer light switch with secondary constant 120V output?
2
Why do I have multiple connections on a single common connection?