How do I bring 50 amp service to my detached garage?

I would like to run 50 amp service to my garage. The run is about 100 feet in total. About 60 feet will be in the basement, 20 feet in conduit attached to bottom side of wooden deck floor joists, and the remainder in conduit buried. Is this feasible? If so, what size and type wire do I use? Does the wire running in basement need to be in conduit? If so, what size & type? When it goes outside, what size & type conduit do I use? Please see diagram attached. Thank you for your assistance. 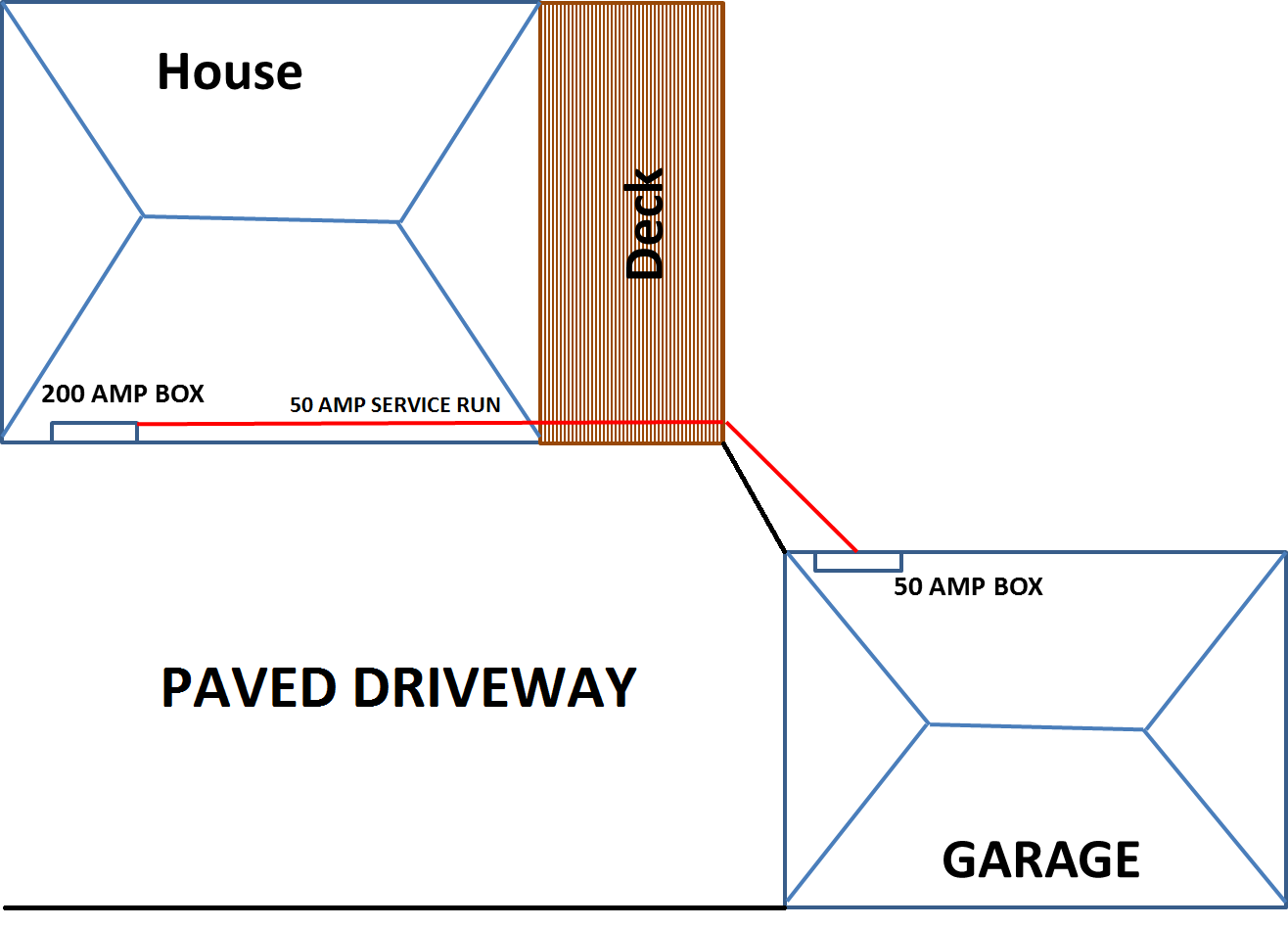 This is quite feasible to do

The hardest part about a job like this is getting your wires down the conduit. Even with that, though, I would use conduit for the full length of the run to keep things simple. Schedule 80 PVC is likely the easiest and best solution for a mixed indoor/sheltered/buried run like yours -- it is rated to protect wires against physical damage, is weatherproof, and assembles much the same way that PVC plumbing pipes do (i.e. with cemented joints). Just keep three rules in mind:

Once the conduit's in, along with a pulling-string to help you get those wires in it, it's time to get some conductors in there. You'll need THWN wires as the conduit outside is considered a wet location, and four of them at that: two hots, a neutral, and a ground. The neutral must be white, and the ground must be green or preferably bare to save conduit space, while the hots can be any other color than white, green, or grey. As to size, you're looking at 6AWG copper or 4AWG aluminum for the hots and neutral, and a 10AWG copper wire for the ground.

Last but not least -- you'll want to size the conduit generously, and a 1.25" PVC conduit will easily fit 3 4AWG aluminum wires and a 10AWG copper ground with room to spare. Of course, if you want to put in a bigger conduit, knock yourself out -- it'll pay dividends if you want to upsize the wiring or pull more conductors later.

25
What wire gauge do I need for a 100 Amp subpanel at the end of a 60' wire run?
1
What size wire to use from house to wood shop?
1
Need help choosing wire for a detached garage
2
What size wire gauge for 1000ft service run?
1
100 Amp Sub-Panel in Detached Garage - Which Wire and Breakers for Code Compliance?
3
Second 100 amp breaker inside existing 200 amp residential panel for new detached garage
13
Running Service to Outbuilding