I'm finishing my basement, and made a mistake.

The wall in some portions was only framed in up to 84". I'm matching the height of my suspended ceiling to the bottom of a steel I-beam the crosses the whole basement at a height of - you guessed it - 85".

I'm looking for a way to affix the angle to the drywall. It'll be 100ish inches long on the offending wall, bearing half the weight of four-ish half-tiles, so not terribly much. I'm wondering if drywall anchors should be stout enough.

I know the proper answer is to frame up behind the drywall, but I'm not gonna. There are reasons.

If I'm understanding correctly, the drywall extends 1" past the top of the framing, and that's where you want to attach the angle for the suspended ceiling? 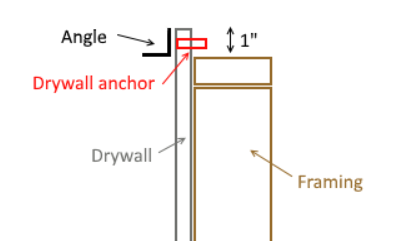 I would normally suggest screw-in type anchors for this (much stronger than the push-in kind), but I'd be worried that installing one will cause damage the top edge of the drywall, and make the anchor useless. If you want to go that way, try it in a piece of scrap first.

Given that it's not a lot of weight, you'd probably be okay with push-in anchors (where you drill a hole then push them in). Just be careful during drilling and don't hammer them too hard. The tiles aren't heavy nor are they subject to dynamic loads. I'd put an anchor in every 16 or maybe 24".

A better bet would be a "Toggler": they push in through a hole (minimizing potential to damage the drywall) but flatten out and have much more strength than the typical push-in anchors. 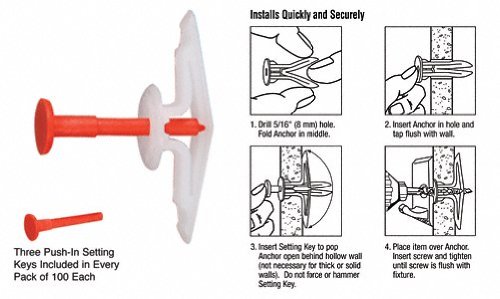 You'll have to hold the angle up, mark the holes, then pre-drill and install the anchors before you can actually mount it, of course. Bit of a pain but not as much as taking down and then refinishing drywall.

Not the answer you're looking for? Browse other questions tagged drywall ceiling or ask your own question.