What alternative methods exist to correct a belly in a clay sewer line?

In the first 18 months of living in my house, I've already had 4 sewage backups in my basement. Luckily the basement is not finished and I've caught the backup each time before it became a large problem (only an inch or two of water within a couple feet of the drain). The basement layout with the sewer line looks like this: 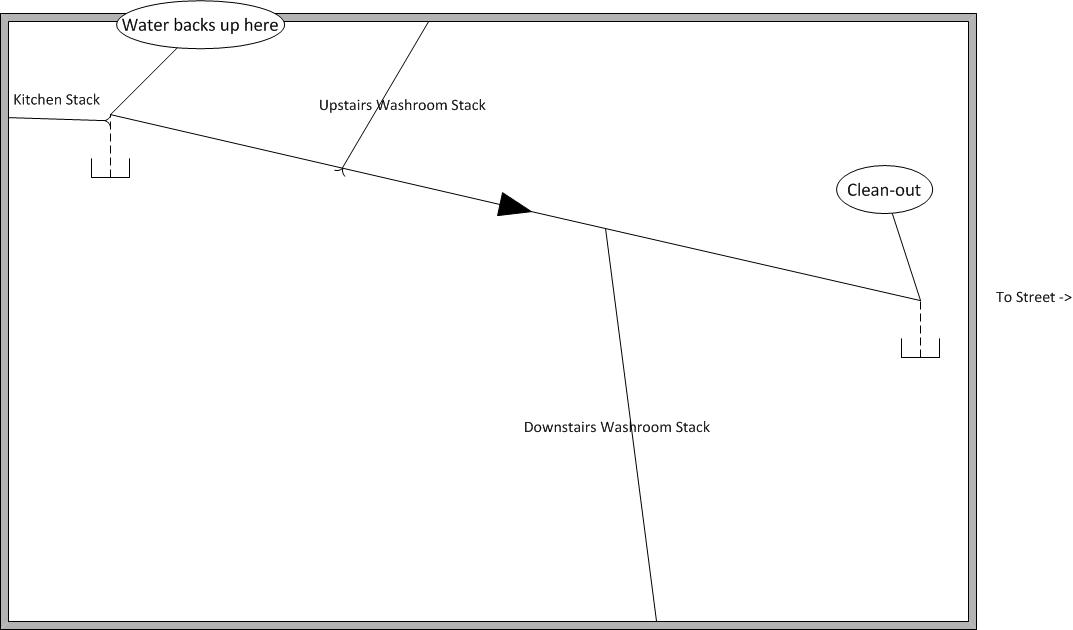 The city has come and inspected the city's portion of the sewer (from the cleanout to the street) with video and confirmed that this part of the sewer is OK - I did not see any roots or collapses in the video.

The distance from the drain where the water backs up to the cleanout is about 30ft, and each time I've augured the drain I've had to put about 30ft of line down it, which leads me to believe that the backup is occuring very close to the cleanout. A plumber told me the distance might not be a good indicator of where the problem is since I might just be pushing the blockage down the sewer until it comes to a spot where it can clear. I've also opened the cleanout while the backup is occurring and verified that I don't see any water movement down in the drain.

A plumber I've used a number of times tells me that this is caused by a belly in the 4" clay sewer, though I've also wondered if perhaps there is a collapse at the connection point and not in a straight part of the sewer line. He quoted me $3,500 to break up the concrete in my basement and lay down a new sewer. This is obviously an expensive and messy operation that I'd like to avoid if possible. I was advised against wasting my money videoing this part of the sewer since either way it will need to be replaced.

Are there any other less invasive methods of correcting this? Would it make sense to only break up a couple feet around the cleanout instead of the entire sewer line, or is this a better long-term fix for the issue?

The only other odd thing I've noticed is that the trap where the water backs up stops holding water within a week or so of a backup (I only put the two together after it happened); when I poured water down it to fill the trap, within a couple of days it was empty. Normally it will hold water for a long time, until it naturally evaporates; there is no primer on this trap.

The best option that I can think of would be to have the sewer lined. This company is simply the first Google search result I found:

The premise here is that a flexible liner is inserted into the pipe (usually using air - think of it as turning a sock inside out) and then the liner is hardened in place (water activated? resin?). The new liner will bridge any cracks or breaks in the pipe as well as any gaps in the joints.

I would also suggest actually getting the section of drain in question inspected...you will really want to know what the true problem is before deciding on the proper corrective action.

6
How can I lengthen my vent stack and are there any negative effects in doing so?

2
How can I cut cement sewer line to add cleanout?
8
Do I have to periodically pour water down my basement floor drain to maintain the p-trap water seal?
1
Mysterious drain going into sewer cleanup
0
Alternative sewer line in basement
1
Should my bathroom's plumbing vent be downstream of the toilet connection?
1
What to do for unused shower drain? (Prevent sewer vapors and mosquito larvae.)