Is it okay to insulate a basement wall when an interior french drain is installed?

As I mentioned earlier, I've got some extensive repairs to make to my house following water damage from some improperly installed siding.

One of the things I discovered when I pulled the wet drywall off was that the cinderblock portion of my basement wall was not insulated. There were furring strips and nothing else. It's a split-level house, so the basement wall is half cinderblock below grade and then wood frame above grade.

There is an interior french drain that runs back to a sump pump in the basement, and there is flashing where the cement drain cover meets the wall. I'm assuming this is to allow any water that makes it to the inside side of the wall to run down the face of the wall, hit the flashing, and then enter the drain.

We bought the house with the basement finished, and for four years never noticed any water problems with any sections of the drywall. I don't think the water problem was with water coming down the walls, I think it was coming up from under the slab (the home inspector had stated that was the primary point of the french drain - to relieve water pressure under the house and not against the house.)

Now that I'm in a situation where I have to gut and re-finish the basement, is it okay to use foam insulation over the cinderblock wall? Or am I setting myself up to grow mold? Does the foam get taped to the top of the cinderblock or do I leave it open?

Here's a picture of what I'd like to do, if you could imagine the cinderblock wall only extending halfway up and then a sill plate and wood framing the rest of the height. 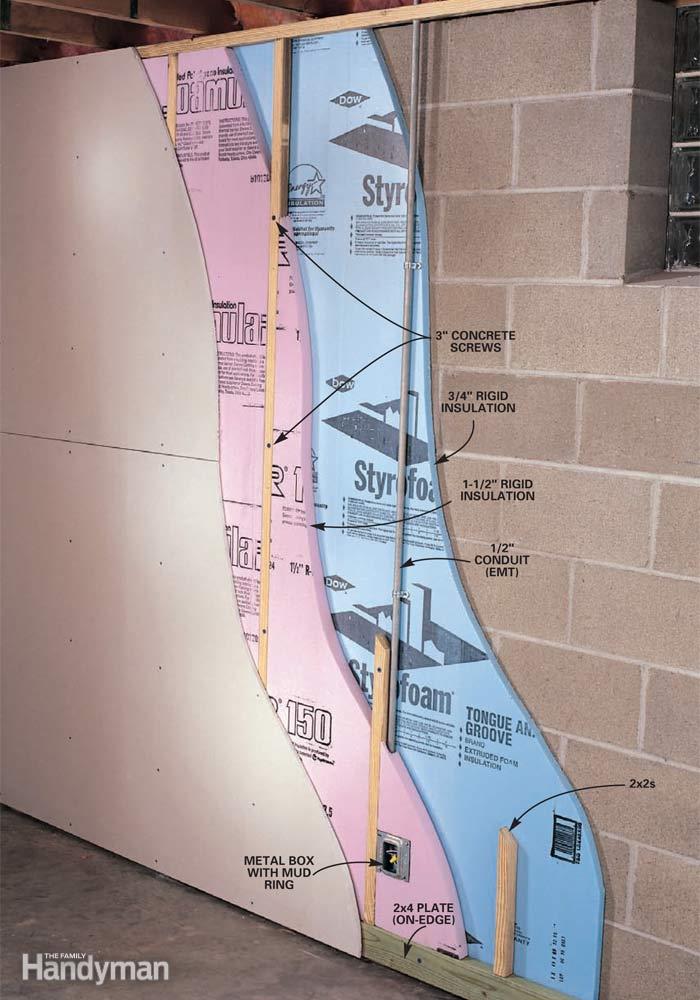 Just noticed this question was never answered, but I did wind up closing everything up later that year and never had any issues. I sold the house earlier this summer (2020).

I figured that, if rigid foam insulation was acceptable, then any kind of moisture barrier would be, too. The rough texture of the cinder blocks and mortar joints would allow for at least some air movement, and worst-case, any mold that might happen to form would be trapped behind the moisture barrier.

Once that was done, everything else was generally finished as pictured in my question. I used pressure treated lumber, ripped it into furring strips, used concrete anchors to attach them to the wall, removed the vapor barrier from the fiberglass insulation (to allow the wall cavity to breathe into the room, because the plastic sheeting is a vapor barrier to the exterior, insulated the cavities, then drywalled over everything.

I did everything on the up-and-up so, while I'd bet someone has something to say with how this was done, it passed framing, insulation, electrical, and finish inspections, and the house passed the home inspection when I sold it.

Not the answer you're looking for? Browse other questions tagged insulation basement waterproofing or ask your own question.

1
How do I seal overlapping sections of flashing around the perimeter of my house?