Is it OK to mount a smoke detector vertically?

In my basement I have several lolly columns attached to wooden beams that are supporting the floor joists. On one of these wooden beams I have attached a smoke detector vertically on the side of the beam instead of at the bottom of it, mainly to avoid someone knocking the smoke detector with their head since there is low clearance. The detector is next to the lolly, not directly over it. 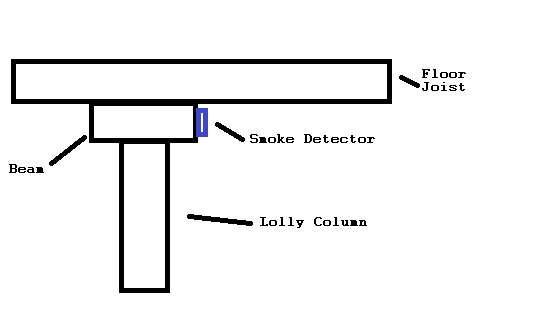 I can mount the smoke detector to the joist in the typical horizontal ceiling type of fashion, but is it OK to mount it vertically? Will its effectiveness be reduced or compromised?

You can mount them vertically, but they have to be installed 4-12 inches (spacing usually on the instructions) from the ceiling. So it might be better to put in on the column than the beam, depending on how large that beam is.

Not the answer you're looking for? Browse other questions tagged installation smoke-detectors or ask your own question.