I recently spent Chinese New Year at my girlfriend's apartment (in China) and woke up one morning to find we'd lost power. I opened the breaker box in the apartment to find the main breaker (2P 40A) had tripped and the top screws looked blackened. I couldn't get the breaker to switch back on even with all the other breakers off, so I reasoned it was shot and needed to go to the local hardware store to get a replacement.

As I studied the wiring layout before heading over a couple of things caught my attention. As an American, I'm accustomed to a breaker bus that the breakers snap into to receive power from the main breaker. No such thing here. Obviously I'm also accustomed to 120v but not unfamiliar with 240v circuits both in the US and from time living in the UK.

I understand that in the UK, 240v to individual homes is carried on a single phase with hot, neutral and ground. My expectation is that China would follow Europe's lead as it's also 50hz and because it does so in most other areas. However the supply coming into this apartment has two hot legs, no neutral, and no grounding bus †. That makes it seem to me like it's split-phase center tap with the 240v being line to line.

If that's the case, I'm guessing the lack of neutral is not as concerning as I initially thought? However I also notice the two hot legs are not balanced: one feeds two 16A breakers while the other feeds three 16A breakers. Don't the two hot legs need to be balanced if it's line to line to compensate for the fact that there's no neutral?

The main 40A breaker also seems too small to supply three 16A subbreakers at 80% of their load, so I bump up to a 63A breaker. However, the house's breaker box is actually a subpanel, with the main panel being downstairs in the apartment block's stairwell with the meters. Everything is fed by the same kind of 2P 40A breaker that served as the main breaker in the house panel, rendering the 63A breaker redundant! I have no access to the interior of that panel as it's locked by the utility company.

I'm also concerned that the wire gauges aren't correct for the amount of amperage being carried both to the breakers and from the breakers to the individual circuits.

The blackening of the top screws of the old breaker is also concerning. Is too much resistance on the wire or screws/breaker a possible cause?

Being a little out of my depth here, my first inclination would be to call a licensed electrician were this the United States. I don't really trust the knowledge, workmanship, safety practices or ethics of Chinese tradesmen though (the first electrician to come out from the power company bypassed the breaker on one leg as a fix, you can see in the photos below!), so any advice would be appreciated. I've also reached out to electrical contractor friends in the US.

† There are however two ground wires from opposing directions spliced together, maybe one is tied into all the outlet boxes and the other goes to true ground, or a ground bus in the main panel? I didn't open the outlets to check because everything is concrete and there's no obvious way to get the faceplates off without breaking them. 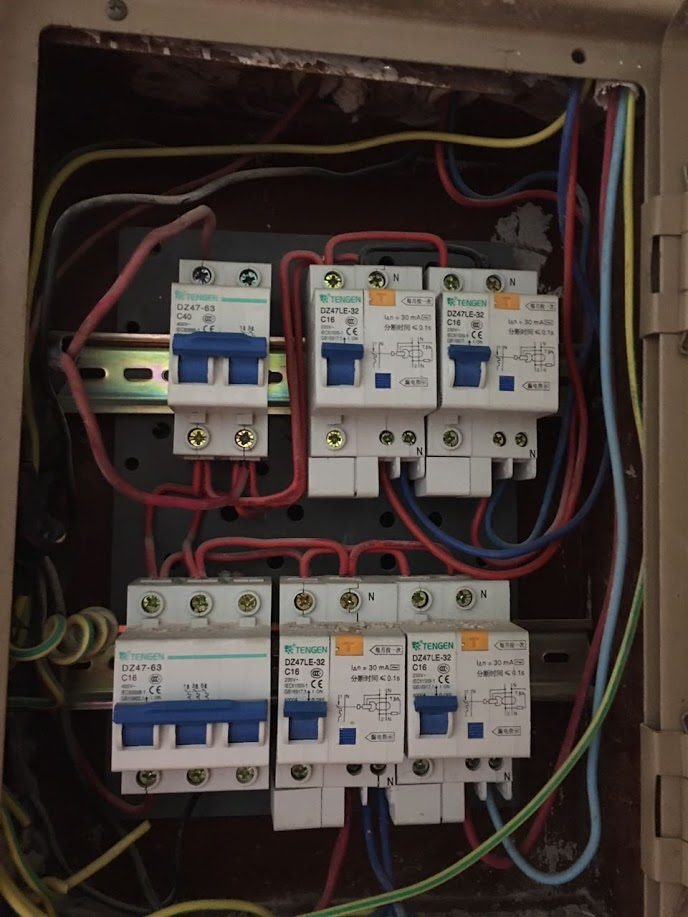 Don't the two hot legs need to be balanced if it's line to line to compensate for the fact that there's no neutral?

No, if there is no neutral then all the loads must be connected across phase to phase. In US terms this would mean that there are no 120V loads that need to be balanced.

I'm not convinced you have two hot legs from a US style split-phase supply.

The Chinese standards seem to be pick and mix of other countries standards. Note that Red=Live, Blue=Neutral, Green/Yellow=Earth is a valid colour combination in Australia.

The four "two-pole earth leakage breakers" (tengen DZ47LE-32 C16) are marked with N for Neutral at one connection.

I would therefore, naively perhaps, expect the blue wires to be neutral and to have zero or very low voltage with respect to the green/yellow ground wires.

I don't see any normal bus connectors, it seems the installer used red wires to construct buses live and instead of the neutral terminal that would be found in a UK consumer unit.

CE marked C16 circuit breakers should be 16A breakers with a "normal" sensitivity range.

The blackening of the top screws of the old breaker is also concerning. Is too much resistance on the wire or screws/breaker a possible cause?

The clamping screws were not done up tight, the cables were not inserted correctly or the switch was passing too much current. Or all three.

Example, for comparison purposes, of an old and unusually neat UK equivalent showing copper bus bars at bottom connecting live feed to single-pole breakers, terminals at top for neutral and ground (these terminals are sometimes also called bus-bars). Note the copper bus bars normally have a plastic shield, and normally there is a cover that shields all the wiring with holes for access to the breakers only. 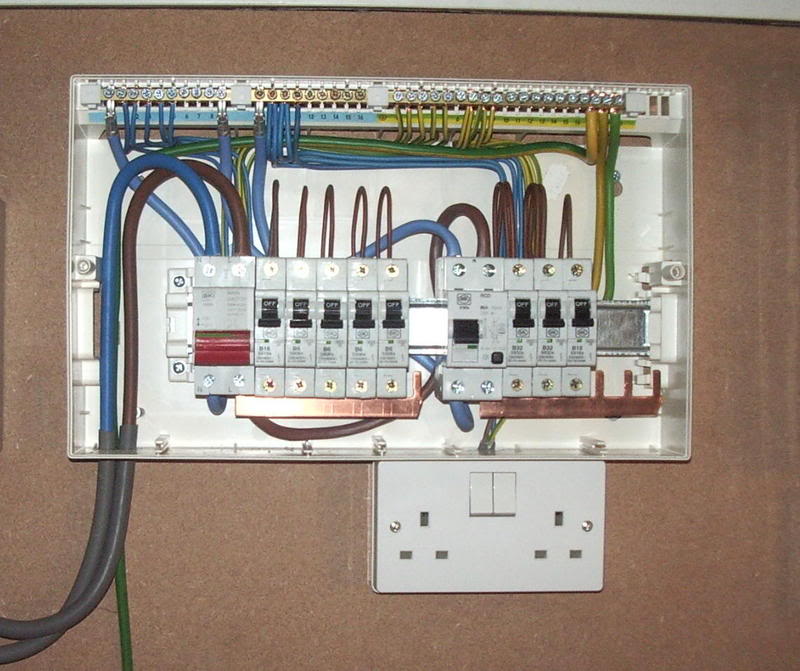 Since China is not the UK, there may be entirely different exemplar Chinese installations that bear little relation to this. The question shows an installation where every breaker and switch has two poles. This means there is no need for a neutral terminal connector strip. However the neutral wires linking adjacent "earth-leakage breakers" form an improvised bus.

Not the answer you're looking for? Browse other questions tagged electrical safety electrical-panel grounding-and-bonding or ask your own question.

6
Is it OK to have ground wire connected to breaker box wall instead of neutral bus?
0
Should I have continuity between hot lug (at service in) and neutral bus with main breaker off?
2
Subpanel - still getting power with breaker disconnected
0
Electrical Service Run to 100A Sub-panel
1
How to add a two pole 40A breaker with corner tab(s) to Challenger panel?
2
Replace Circuit Breaker on Split Bus Panel
3
Neutral and ground connected to one bus bar in subpanel; should I change?
0
Seeking advice on how to rearrange existing breakers and add 2 circuits, including a 20A GFCI/AFCI breaker in a split-bus GE panel
0
Is there a proper way to fill an electrical panel?
2
Should the grounds and neutrals be isolated in this subpanel?