I live in a home that had a bad common lead connection, and this caused rotating blackouts throughout the house, and there were a couple of surge protectors that were overloaded - one blackened and produced a volume of smoke, in a room 15 feet from the load center.

After we had an electrician look at it, his determination was the problem was a bad common connection in the box out by the meter - the end of the cable was severely corroded, covered in green crust, and the insulation showed signs of burn damage as the cable had apparently overheated.

NOTE: I failed to state that he replaced the bus box and spliced a foot and a half of the common cable to fix that problem.

Now we have one side of the house that seems to trip the breaker on a regular basis, but it always resets and is fine until there are four or five lights or appliances (a combination of three or four rooms) on simultaneously. Shouldn't you be able to have every light in the house on and not trip off a breaker, effectively shutting down that side of the house?

This has not happened before the bad common incident, since then, it is always the same breaker that trips. Only one breaker and it never did this in the five years we've lived here before that problem. I think this is telling me two things, one - that the breaker may have been weakened by the drop-outs and surges during the bad common problem, and the wiring in this house is not correct for code. My biggest concern isn't the breaker itself, but I am wondering if this is dangerous. Am I going to wake up some night to find the place on fire? Can I just replace that one breaker and be OK, or will I have to get an electrician to rewire the house? I am really worried this will be beyond my means to repair. Help!

CALL YOUR ELECTRIC UTILITY NOW ON THEIR EMERGENCY NUMBER

You have a bona fide electrical emergency right now due to that failing neutral, and since it's in the meter pan, it's the utility's job to fix. Call them up on their emergency number (same number that you'd use to report a power outage) and tell them that the neutral in your meter pan is failing as well as giving your address. Until then, keep loads to an absolute bare minimum as the voltage at your outlets is going to be all over the map.

The bad common incident isn't over! You need help NOW!

The symptoms you are reporting now are the same as for a lost neutral. So it isn't fixed.

A lost neutral will destroy most of your appliances and burn your house down. Yes it will, no exaggeration.

Call the power company on the emergency number

The problem is in their meter pan, and they need to fix it. Use the power outage number because this actually is a power outage. Oh, speaking of that---

Turn your main breakers off NOW

Avert further damage by turning your main breakers off right now. Yes, the cold and dark sucks, but the power company should be enroute.

Your dryer and oven/stove may give fatal shocks right now

Many houses still use an old, 3-prong "NEMA 10" connector for electric oven, range and dryer. Under certain conditions it can electrify the metal parts of the machine. This is one of those conditions. This is not an issue for the 4-prong NEMA-14 sockets. Even if you ignore all my other advice, shut off the breakers for dryer and oven/range. 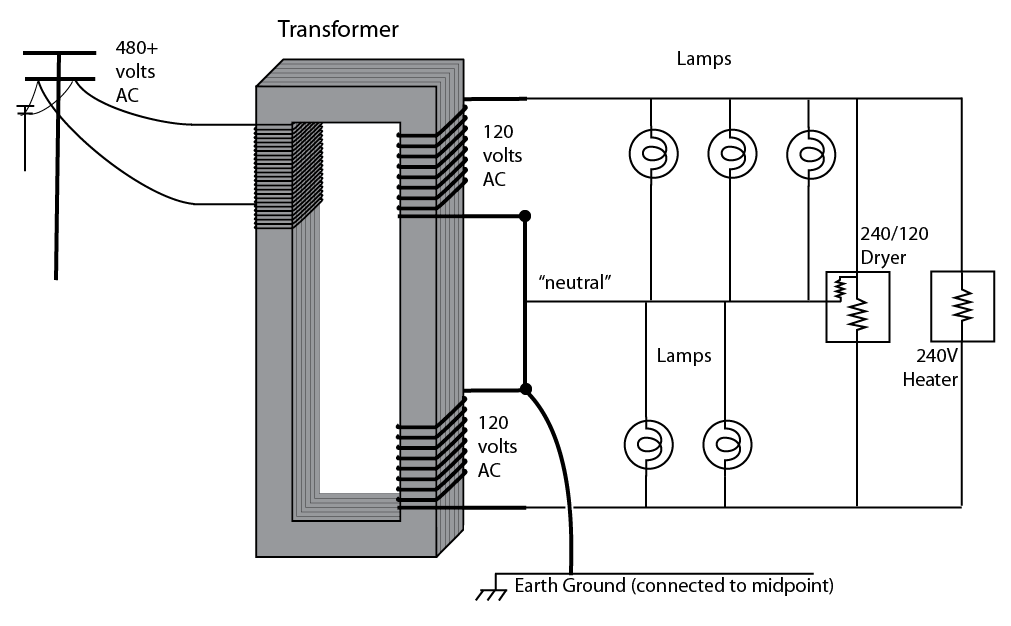 Notice how it's 2 complete 120V systems stacked, with a neutral being used as a shared common, to save the expense of double wires. Notice this system is imbalanced already, with 3 light bulbs and the dryer load on the upper. This imbalance is normal. What happens if neutral disconnects at the transformer? Big trouble. Without neutral to force them to 120V, one will be over 120V and the other will be under 120V. They will still total 240V, so the water heater (which isn't connected to neutral) won't care.

The ones which are over 120V, however, will tend to burn out, blow up or catch fire. When that load is destroyed, it will imbalance things even more, stressing the next load, blowing that up, etc. etc. Bad news. If you're lucky enough to have a circuit breaker trip, it's because a load is malfunctioning so badly that it drew massive current.

If you really need to turn something on

Being winter, I wouldn't be surprised if you'd really like to run the furnace.

First, you don't dare turn on anything that is 120/240. That means it has a double breaker, and it also has a neutral wire (like the dryer in the above diagram). Aside from potentially burning out the 120V part of it, you could have that NEMA 10 hazard I mentioned above.

Now - this requires some pro knowledge - if you have loads which are 240V-only and do not use neutral at all (like the heater in the above diagram), you should be able to turn those on.

Other than that, you can't. Why? Because ground connects to neutral actually on your side of this break. If neutral is broken, the current will seek to return through ground. Dirt isn't a very good conductor, so that will be quite weak (and that's why some appliances are barely working). Ground not being a satisfactory current return, it will also push through other potential paths -- such as you or your family members.

Not the answer you're looking for? Browse other questions tagged electrical-panel electrical-distribution or ask your own question.

0
2 breakers powering 1 set of outlets
2
Can I add a 30 amp breaker to a sub panel being fed from a 50 amp breaker
2
Subpanel - still getting power with breaker disconnected
0
How could other breakers have been switched off when one was tripped by a short?
0
unable to turn room light on all the time
1
Cable Size for 100 amp service load center
1
Electrical wiring problem in panel when using 220 volt log splitter
16
What is the difference between a "handle tie" and "common trip" in circuit breakers?
1
Correct voltage of hot wires with common neutral
4
After some work in panel, GFI breakers for *other* circuits trip when well pump runs