Disclaimer: Please do not get hung up on whether anything discussed in this question is up to code. I am concerned with safety, and I'm familiar with electrical dangers and safe working practices.

I am planning on building a new workshop and most of my equipment is single phase 120V or 240V but several pieces are 240V 3-phase.

I am wondering if I can install a 3-phase load center, where L1 and L3 are fed by the mains 1ph legs and L2 is fed by the generated phase from the rotary phase converter.

The objective would be to run 120V / 208V branch circuits from 'always-on' phases of the panel, with 3-phase breakers only being fully energized when the RPC was running.

My fallback, of course, is to simply feed a smaller separate 3ph panel with the RPC and use a normal 1-phase panel to feed the majority of the workshop branch circuits.

Yes! It can be done.

But it's fairly tricky. L1 and L2 are a single phase which is center-tapped for neutral. It is not possible to bend it to an angle other than its natural 180 degrees. But it is possible to disregard neutral entirely, and treat L1-L2 as a single phase. And use them as two corners of delta configuration. The rotary phase converter synthesizes the third corner of the triangle: L3, which is 240V from L1 and L2, and all in correct phasing.

This can be overlaid on the existing L1 and L2, so it does not need to be a separate service. Note this diagram is the rotary phase converter's perspective. What happened to neutral? 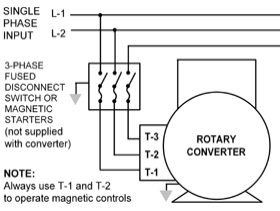 Neutral remains exactly where it started: halfway (120V) between L1 and L2. This is asymmetrical: L3 is coincidentally 208V from neutral. 208V will not be available unless the rotary phase converter is spun up. This arrangement is called "Wild leg delta". Since L3 is the "wild leg", it must use orange wire or be marked. (NEC 110.15**). 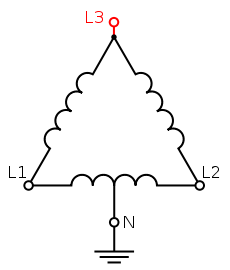 Use a panel meant for 3-phase wye

So the panel will have a separate neutral from ground bar**.

Breakers need to be listed for their voltage, which means 125V breakers will not do in 208V slots.**

3-phase cabling should be done either with THHN/THWN-2 in conduit, or with /3 Romex -- with white wire re-marked as a conductor (good choice for orange, since then you only have to tape one wire).

If you are wiring something made for 240 wild-leg (seems unlikely) which wants 120V, it can be derived by carrying a neutral along too; for that you'd want /4 or /2/2 cable. You would have to be very careful about loops and biases in connecting that - you could end-run around those issues by installing a small 240-120 transformer for its control power: install it on L1-L3 and that would assure the machine could not start up unless 3-phase power was on.

There's no particular difficulty in complying with Code with this setup, so there is no reason not to do it. The only shortcuts are either trivial (orange wire) or dangerous (omitting ground).

** I presume OP's rejection of Code is merely because he does not want to be thwarted; and he is willing to comply when it's easy.

The company I worked for in the suburb of Pittsburgh, PA. had a 3 phase crane and other 3 phase equipment running off a rotary phase generator. I never worked on this piece of equipment but it was a motor and generator in one housing. The motor was powered off 240volt single phase power and the generator produced the 3 phase power. This power was fed into a circuit breaker panel which fed all the 3 phase equipment. It worked very well for about 20 years until 3 phase power was installed in that part of the city. Hope this is an option for you.

First off -- what you want to do is quite possible to do within Code. Phase converters treat the 240V supply coming in as a single phase, ignoring the neutral. However, the L1-L2 (in their terms) coil on a phase converter is effectively in parallel with the center-tapped secondary on a North American single phase service transformer. This means that electrically, this configuration is equivalent to one, center-tapped coil, which makes the overall situation come out looking exactly like a high-leg delta service. While the power company no longer gives these out, they're still legal by Code, although a few unique requirements kick in.

Instead, you can use a two pole, 120/240VAC breaker or disconnecting switch in a separate enclosure if a disconnecting means is necessary. This also allows for more flexibility with placement of the panelboard within the workshop.

You can now wire up the rotary phase converter. L1 and L2 on the phase converter connect to the A and C phases on the three pole breaker for the converter circuit, while L3 on the phase converter connects to the B phase on said three pole breaker. The breaker and wiring should be sized to 125% of the nameplate input full load amps of the converter as per 455.7(A) and 455.6(A)(1), respectively; provided the breaker panel is in sight of the RPC, this also provides the disconnecting means required by 455.8(B) and (C). If the panelboard isn't in sight of the RPC, a separate breaker enclosure or HP-rated switch is needed; use the same amp rating for this disconnect as the breaker. Finally, the breaker in the panelboard for the RPC should be held down with an appropriate hold-down kit as it is being backfed on its B phase when the RPC is running.

A /3 cable should be used to wire this circuit, with the white wire used for the B/L3 phase and retagged orange with orange electrical tape such as Scotch #35 -- this meets the requirements of 455.6(B) for a marking system for the manufactured phase that is consistent throughout the system and premises, and also is standard for high/wild legs in high-leg delta services. If you're using conduit instead of cables, you can simply use orange THHN instead wherever I specify to tag a white wire with orange tape.

Of course, you'll need branch breakers for your panelboard. Single pole breakers can be placed on the A or C phases, but not the B phase as that's the "wild leg" and runs at 208V relative to the panel neutral. (Putting single phase loads on a manufactured phase is a violation of 455.9 atop the fact that there are very few single pole breakers in existence that are straight rated for 240VAC service.)

120/240VAC or 240VAC-only circuits should use a two pole breaker connected to both A and C, but not B. You can also use a three-pole breaker for this provided it is rated for single phase service, if you can find such a critter that is. You cannot use A and B or B and C for a 240VAC only circuit, though -- not only will it not work unless the phase converter is running, but most two pole breakers are 120/240VAC slash rated, which means they can't be used with the 208V-to-neutral B-phase at all. Furthermore, doing that with a 240VAC load would still be a 455.9 violation no matter what else was done..

Three phase circuits, of course, use a three pole breaker connected to all three phases in the panelboard. Note that a three phase circuit will need /3 in the no-neutral case or /2/2 if it requires a neutral as well for 120VAC controls -- tag the white wire orange with the aforementioned tape, and use the "candy cane wire" for the actual neutral on the /2/2.

Finally, you'll need a means of complying with 455.21 and 455.22 so that you don't have three phase motors trying to start sans a phase or continuing to run if the B phase drops out. The easiest (albeit likely not cheapest) route is to use three pole contactors in the panel, 1/three phase utilization circuit, with 208VAC coils connected from the B phase of that circuit to the neutral. This way, the B phase must have some power supply in order for three phase power to make it to three phase machines. Obviously, a more sophisticated relaying approach could be devised that provides sensitive undervoltage protection for the B phase, but that's beyond the scope of this answer.

8
What are my options for installing 240v receptacles in an attached garage?
1
How do I know if my service panel will accommodate a 240v circuit breaker
1
Are all ungrounded >120v outlets now outlawed?
0
Optimal Breaker Configuration for Split Phase Mains Power
0
Why are some electrical systems only two phases of a three phase system?
0
How can I tell if this appliance, a kiln, is using 208V single phase or three phase?
2
Is it possible to wire a 240v outlet so that after I don't need 240v anymore I will have two 120v circuits?
0
Is This Two-Phase Outlet Wired Correctly?