Mitigating an out of plumb foundation wall

My wife and I bought a house (built in 1985, Atlanta GA suburbs) with a fully finished basement that recently had a hot water heater leak that ruined the laminate floor. This disaster actually was helpful because after pulling up the floor, we had several days of rain which revealed some water infiltration through the block wall that we wouldn't have seen if the flooring hadn't been removed. We have been in touch with a basement waterproofing company and are working with them on that issue.

The previous owner had mentioned that she had an insurance claim due to freezing pipes that flooded the basement. She also mentioned that the insurance company's contractor had installed some steel beams behind two of the walls. None of this could be seen however, since the basement was fully finished. Now that the floor and baseboard is gone, I was curious so I cut open a stud cavity to a height of about 4 feet and had a look. There are indeed steel posts (4"square) as you can see in this picture: 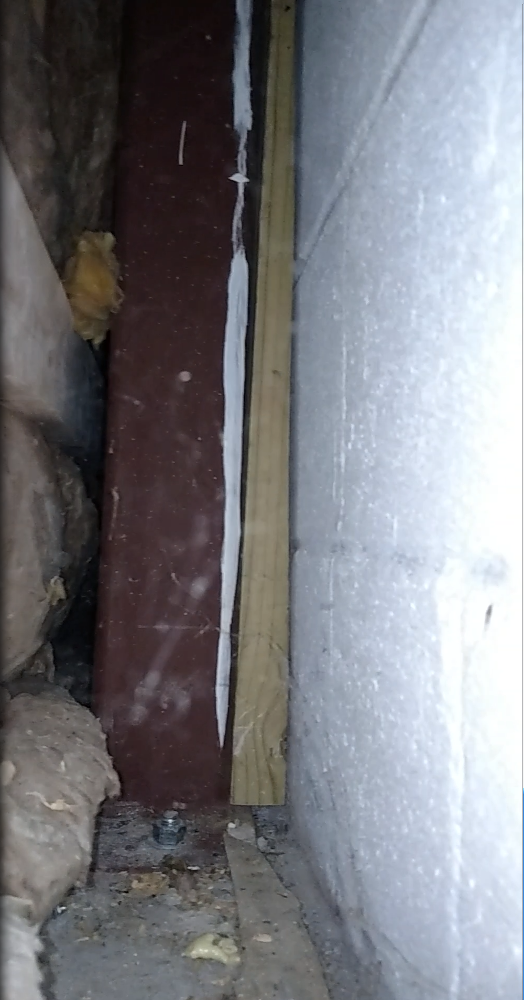 The posts are 8 ft or so apart and you can see in the image that pressure treated 2x4 material has been cut and positioned as shimming between the presumably plumb post and the out of plumb concrete block wall. This post has a shim that starts out about 1-1/2" thick and tapers down to 1/8" (guess) which over the 8ft of the wall works out to about a 0.8 degree angle.

The posts are bolted into the slab and the block wall via welded L brackets. I suspect that they tie into the framing above as well but I could not see that far.

My question is whether or not this is a common method of mitigating a leaning foundation wall and if not, what can be done to correct the problem.

This is a very good mitigating method for a leaning basement wall. The lean isn't really an issue. It is the buckling that is costly. As long as these prevent buckling they are doing their job.

I have mentioned before that I have flipped a fair share of houses, and a lot with foundation issues. I would be extremely happy with the treatment of this wall. I don't think the foundation is a huge red flag either. This is certainly something you should watch though. What caused this foundation to lean? Was it the soil? Improper footers? Issues with the outside of the house? You need to investigate this a bit more because you need to figure out if the rest of the walls will fail or if you can help mitigate the issue yourself. So it seems to be fixed right but what can you do to make sure the wall isn't feeling pressure still?

Not the answer you're looking for? Browse other questions tagged walls basement concrete-block or ask your own question.

2
How can I fix a small slightly damp area in my basement wall?
3
Is my plan to drain foundation wall water reasonable?
2
How can I repair and waterproof a large crack in my foundation wall?
1
Is this crack in block foundation/under pinning something to worry about
3
How can I support second-floor beams when replacing posts in the basement?
0
Mounting a TV to Concrete Through Wood Paneling and Air Gap
3
Foundation concerns with 40 year old home
1
Repairing finish on basement block foundation wall
1
Mid project finishing basement: should I rip out new framing?
1
How to run conduit from external wall into basement cellar