Is a yellow toilet seat normal?

I moved into an apartment, and found the toilet seat is yellow, which I didn't notice before moving in.

The landlord said the toilet seat turned yellow because of the sunshine, and had been cleaned.

Is what she said true?

What can I do about it? 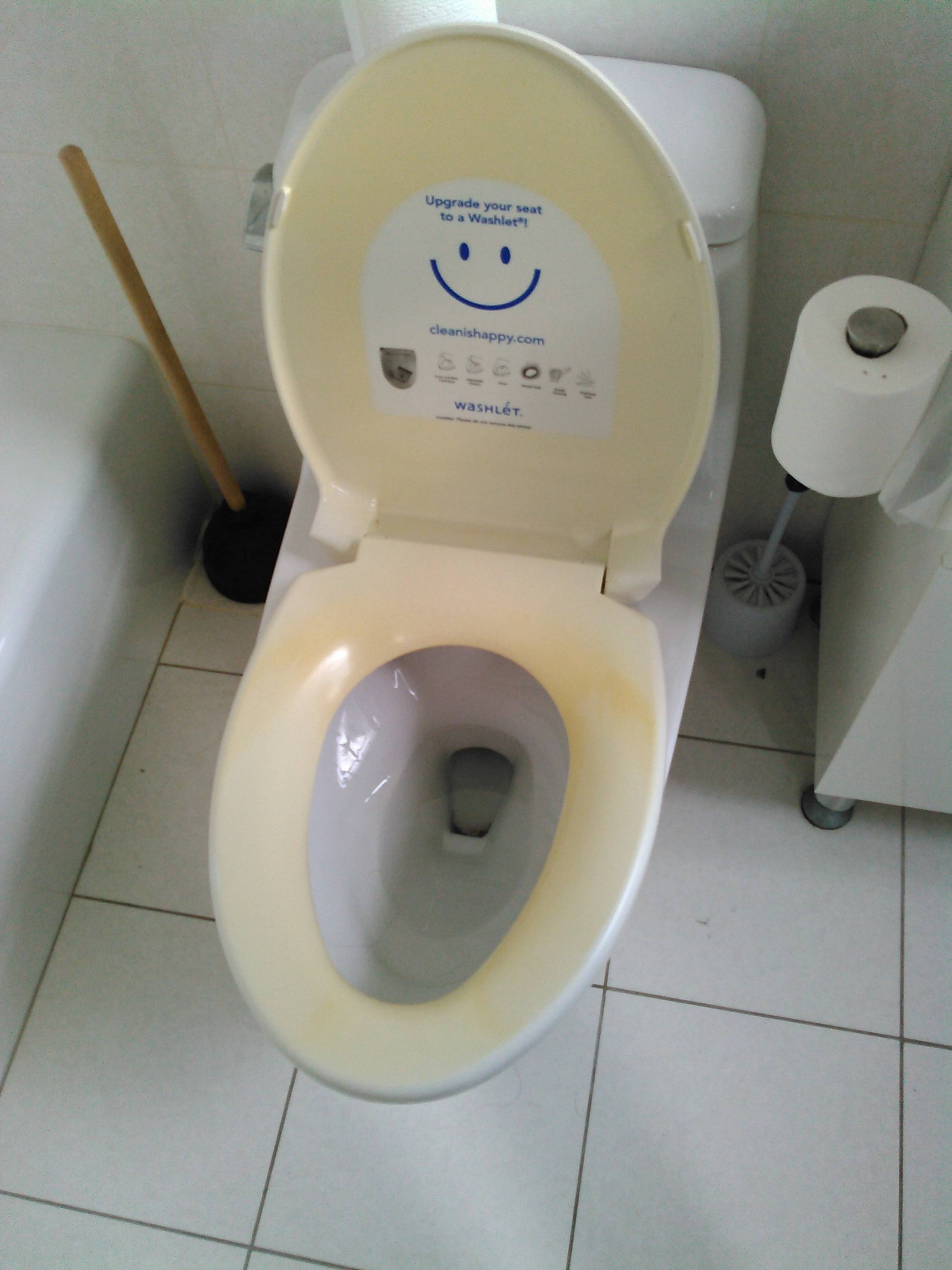 Yep, sunlight will definitely change the color of plastics. It's the UV light, which is invisible to you, but also causes your sunburns.

I'd imagine you'll be cleaning this on a more or less regular basis yourself with some kind of disinfectant. I'd probably disinfect everything (a mild bleach water solution would do nicely) immediately upon moving in, just because.

If you really hate it, you could always try demanding that the landlord replace it, or you can find a replacement pretty cheap, like this one for $14 at Home Depot.

If you replace it, it'll probably turn yellow again eventually, but it'll happen slowly and you'll either have moved out by then, or will have grown to accept it as yours, or you'll just replace it again with another cheap toilet seat.

I wouldn't worry about it from a sanitary standpoint, though. :-)

Toilet seats are components that are frequently replaced with wear and time. You may not need to replace them as often as you replace the rubber components inside the tank, but you should reasonably expect to replace them every few years, to keep a new appearance.

The discoloration could be the sun, but it could also be caused by the cleaning products used on it.

Toilet's typically don't come with toilet seats, unless they are non-standard. So the builder/plumber buys the toilet seat separately when installing a new unit. There are two standard type of seats, "round" and "elongated". What you have appears to be elongated. Measure front to back, and take a picture of your measurement and go to your nearest home improvement center (Home depot, Lowes, etc) and ask for help selecting a replacement. Replacements are inexpensive, with the "better" ones having a quiet close feature. Be sure to match your toilet's color, if your toilet isn't white (not all are white). Installation is fairly simple, and requires basic hand tools.

Your landlord could replace this for you, but that is really up to them, as their responsibility is that it works, not that it is pretty. To make the home pretty is your responsibility, if you don't think the landlord is doing enough. The landlord might be willing to install it for you if you buy it... That would depend on them, and their relationship with you. This is an inexpensive repair, but be aware that it becomes the landlord's property legally, so don't try to take it with you when you leave (unless you put the old one back, but don't save that unsanitary old thing, toss it in the garbage).

I replace toilet seats as a move-in practice, and I replace them again as soon as they show any signs of wear or general aging. I buy nice whisper-close units and pay around $40, but very cheap ones are also available. Just keep in mind that the cheaper you go, the more likely you will replace it again.

Hydrogen Peroxide in a big plastic bag with the toilet seat. Not too much - just enough to wet it all over. Tie back and put it out in the sun. The UV, heat and peroxide will whiten it.

4
Are these toilet bolts installed properly?
0
What could cause a toilet to bubble occasionally, even if sewer line is clear?
0
What could that red splatter have been under my toilet seat?
1
Toilet Still Gurgling
3
How to make a toilet seat hinge more stiff?
0
How to fix toilet with multiple leaks
0
Can a toilet be properly installed without a flange?
1
Installed LASCO MagnaFlush Toilet Tank Kit, Now Toilet Runs All the Time?
1
New toilet already clogging?
1
Is it safe to flush a high pressure toilet that hasn't been flushed in > 3 years?