I'm planning on adding a full bath to our basement, but I am wondering how short I can go with the bathroom door. The room itself will easily clear 80" tall, but the entry side wall is flush up against existing duct work. 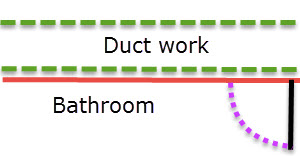 The tallest door I can reasonably expect to fit would be 75", which is just shy of 78". Is this acceptable or could I run in to issues when I sell the house?

Looking at codes, it seems like egress doors are explicitly called out, and interior doors seem to be under looser guidelines.

The Code Does not stipulate the height of doors in bathrooms. Yes, you are correct that the Code does indicate that ONE 3'-0" wide x 6'-8" high door is required for "habitable spaces". However, only living, sleeping, eating and cooking spaces are defined as "habitable spaces". "Bathrooms, toilet rooms, closets, storage rooms, utility rooms, halls and similar areas are not considered habitable spaces." (R 202 of Code)

By the way, the Code does stipulate the ceiling height of 7' for, "habitable rooms, hallways, corridors, bathrooms, laundry rooms and portions of basements containing these spaces." Now, there are four exceptions for sloped ceilings, beams that hang down below 7', etc. (R 305.1).

Check your building code first, as the more out of code things you have, the more problems can be created later when selling or remodeling. It appears you have tried to do this already, and didn't have a good answer. So I would get some advice from someone familiar with your local codes.

But when I look at your diagram, the door opens away from the dictwork, so in theory you can put in a full size door, and it will be the ducts, and not the door that cause a reduction in clearance. And that neatly bypasses any code issues that could impact the door itself.