How should I cover this drainage garden pit in my front yard?

We just bought a newly constructed house. In front of it is a rectangular concrete pit, maybe 2–3 feet deep and roughly 8 feet long by 5 feet wide, with dirt at the bottom and several shrubs planted inside it. I'm not even sure what exactly it is. Our home inspector called it a "water retention garden". It was definitely newly built at the same time as the house, and our real estate agent seemed to think it was normal in new construction, to facilitate drainage or something (the plants perhaps helping to retain water). It has a drainage pipe leading into it and gets quite wet when it rains.

It's not well lit at night, and we're concerned that it presents a fall hazard in the dark. We'd like to cover it or fence it off or something. But we'd like to do so without foiling its purpose or killing the plants inside.

Our first idea was to hire a local metal fabricator to produce a grate to cover it. But we're concerned that this would starve the plants of light. We're also concerned that it would prevent the plants from growing naturally. The center shrub inside it is labeled as a cultivar of dogwood that can grow to six feet and needs at least partial sunlight.

Another idea would be to surround it with a railing. But this is somewhat physically awkward, as there's not a ton of space for a railing to fit comfortably, and aesthetically awkward, as it would draw a lot of visual attention to the funky pit in our front yard.

What's the best way to make this pit safe? Is one of these ideas clearly better? Is there a better possibility we haven't thought of? Is there anything else we should know? 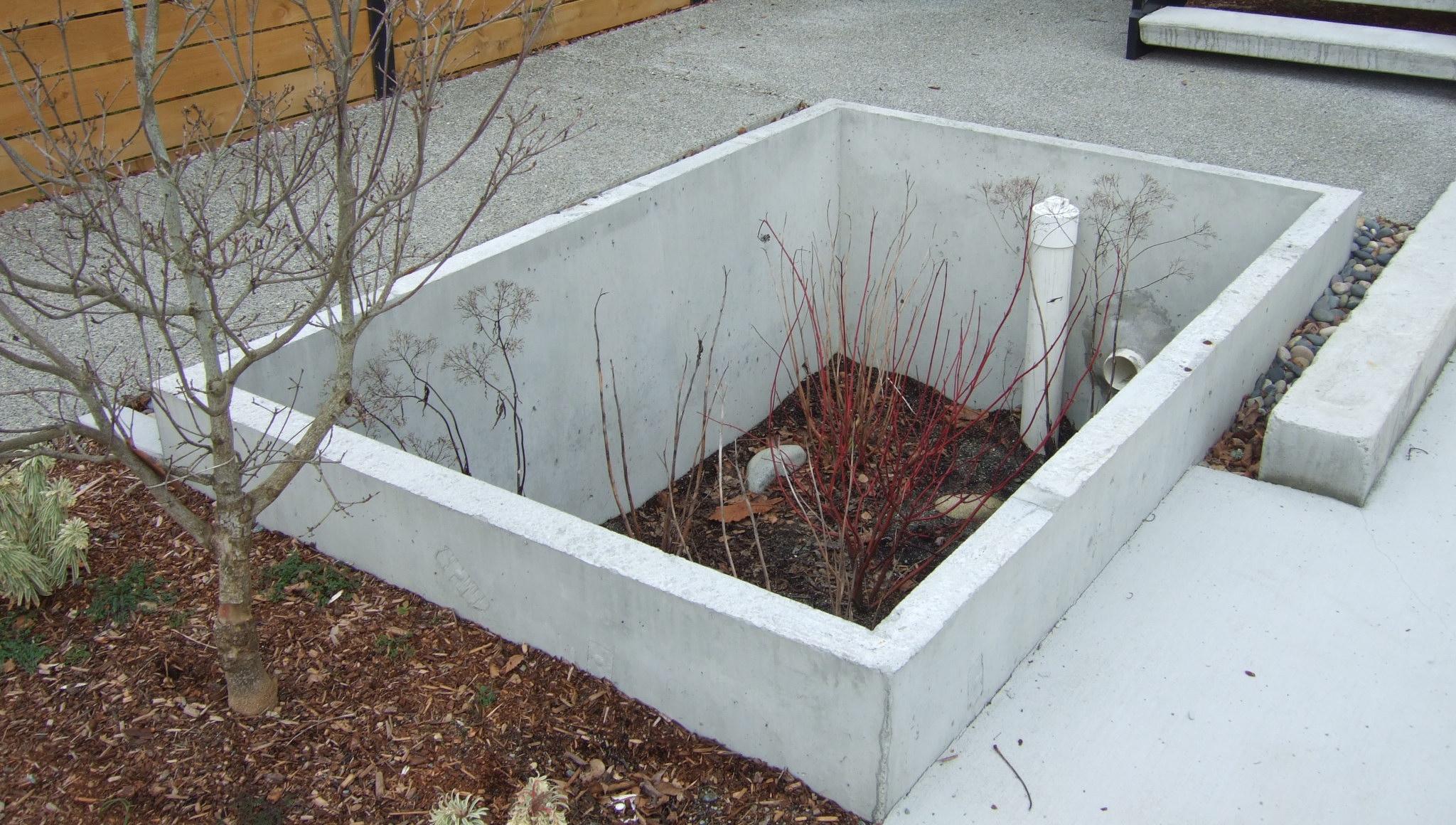 Thought I'd post an update for future searchers who are curious how this turned out. In short, we ended up installing a cable railing around the pit. We ordered the parts from one of the national online cable railing suppliers and installed it ourselves. The cost (parts plus installation kit plus shipping) was about $1,500. We used Tapcon anchors to secure the posts to the concrete. The pit is shallow enough that it doesn't need to comply with code for railings, so we spaced the cables and posts farther apart than would normally be appropriate for a cable railing installation, to make it less obtrusive. We're pretty happy with the result.

Biggest mistakes: (1) The posts ended up crooked (not perfectly vertical) due to a combination of our imperfect installation and the railing supplier's imperfect welding of the post bracket. I guess maybe we should have shimmed them, but we didn't really know how. We actually had to reorder two of the four handrails because the posts were so far off of vertical that the length between them exceeded the length we had measured. (2) We should have ordered the handrails in steel rather than aluminum. They flex more than we would like.

Many thanks for all the great answers and explanations. Lots of cool ideas. If we were to do it again, we might experiment with the bench or planter ideas. 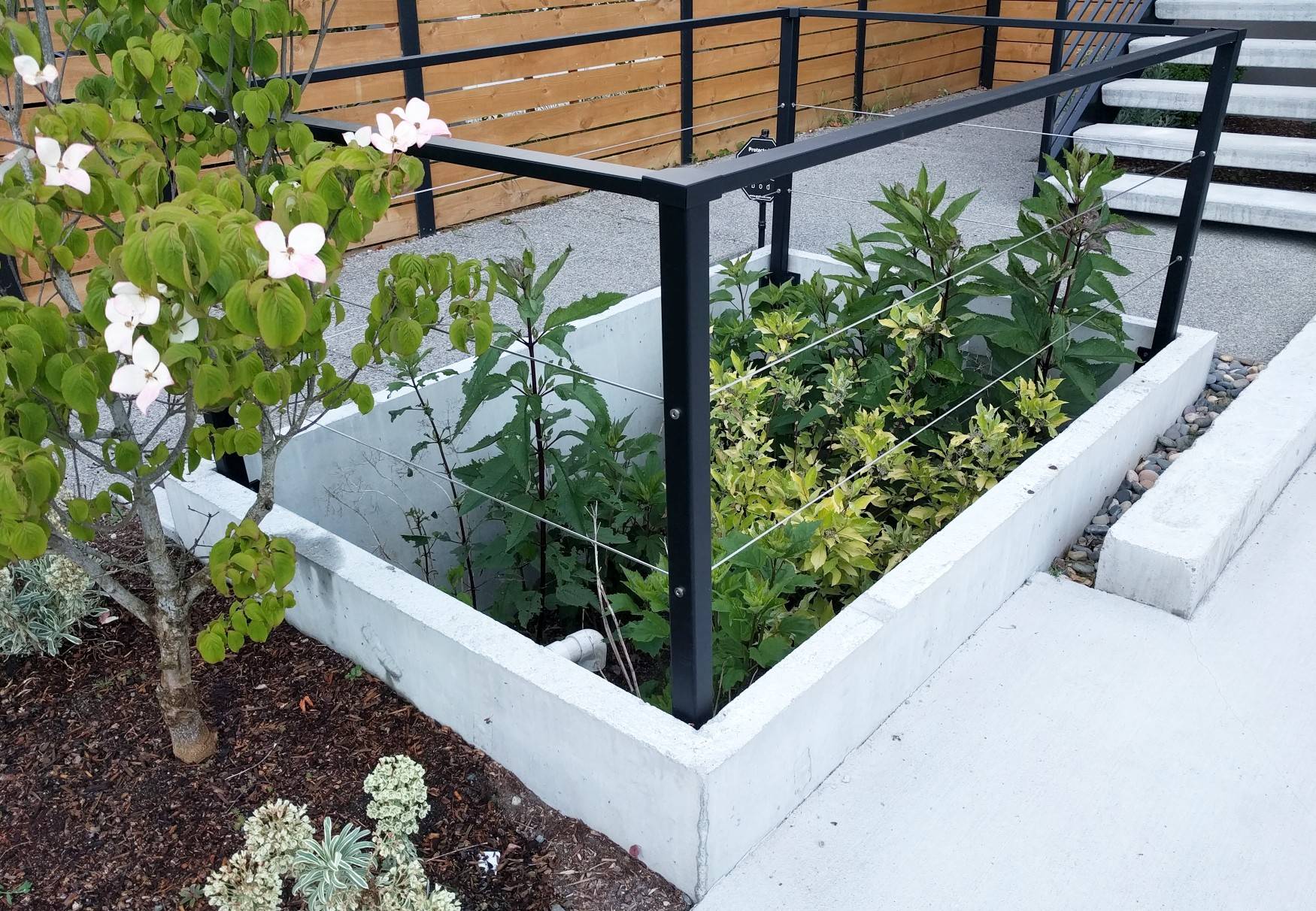 Those typically act as temporary rain water water storage tanks. The idea being to limit the demand on the sewer system during storms. The water is allowed to back-up in those pits and drain more slowly to the sewer system. They may also be used in high water table areas to collect and drain the water table before the water enters your house during the rainy or snow melt season.

You have a few choices.

You could fill it with rocks, but that would take away a lot of volume and defeat the purpose of the pit so I do not recommend it. That may also be against code in your area.

You could cover it with a grating, perhaps made from metal fencing materials or a custom grating, but that wont look that wonderful and is a pain to clean out leaves, blown in trash, or someone's cigarette butts...grrr.

You could, put a fence around it to stop folks from falling in, but again, that's a bit of an eyesore and the cleaning issue.

Personally I'd cover it entirely, leaving an air hole in the side and access to the maintenance pipe cap shown in the image. Perhaps composite decking or some other material, then make a feature out of it with planters.

My personal, preferred solution would be to turn the "decking' into a box, that is make the entire decking one big attractive planter over the open box. Would be a fun project too :) I'd make the sides of the box match the cladding I see on the wall behind. I'd also extend the maintenance pipe up through the box so you can get at it without having to remove the planter. Maybe have it end just under planter soil level.

You are going to have to make some decisions, because most of your goals are contradictory. Obviously you cannot keep the tree and cover the garden. Less obviously if you have insufficient room for a railing you will likely get plenty of practice pruning that dogwood once it reaches full height.

The first thing to consider is your concern that the area is not well lit at night. I see a staircase in the background. Is a motion sensor light by the door appropriate? Would low-voltage landscape lighting on a timer be a better option? It's hard to say without a look at the whole situation, but it's something to consider.

The most attractive solution is probably a cable railing system. The posts could easily be on top of or inside the wall, preventing loss of space. Though again it's tough to say if it'd match the house or existing stair railings.

I can think of two options off the top of my head:

A simple fence should do, and need not be terribly visually obtrusive.

Alternatively a rather coarse net over would prevent people from falling in (while not encouraging them to walk on it), but not block significant light or plant growth.

Find out if you can fill the hole with loose fill, such as fist sized rocks, or stack hollow concrete blocks loosely in it to take up the space, but still allowing it to hold water and drain.

Another option would to have a grating made for the top by a welder. A set of bars across the top, larger than the opening, welded to another set of bars the same size as the opening on the bottom, so it fits like a lid.

Not the answer you're looking for? Browse other questions tagged safety outdoor drainage railing cover or ask your own question.

2
How to promote garden drainage?
5
Can I use a single cable for cable rails?
2
Front yard flooding, drainage help needed
0
How can I get rid of gnarly roots in an outdoor French drain without hiring/renting a roto rooter
1
Yard Drainage issues
1
How prevent water drainage from neighbor's yard?
0
How should I drain an area of gravel between a sidewalk and retaining wall?
3
How to protect Building foundation from Dry wells