I have a receptacle with a wiring configuration I am not familiar with (see picture). The receptacle is controlled by a single pole switch elsewhere in the room. The two black wires are pig-tailed together in the box. One white wire is connected to a terminal on each side of the receptacle. The ground wire is connected both to the ground terminal and the bottom neutral terminal. Is this normal? Is it safe? This looks similar to something I've read about called a 'bootleg ground' -- not sure if that's the case here. The house is ~40 years old and the switch/receptacle have been operating correctly and a plug-in receptacle tester doesn't show any problems. It just doesn't seem right to me. Any advice would be appreciated! 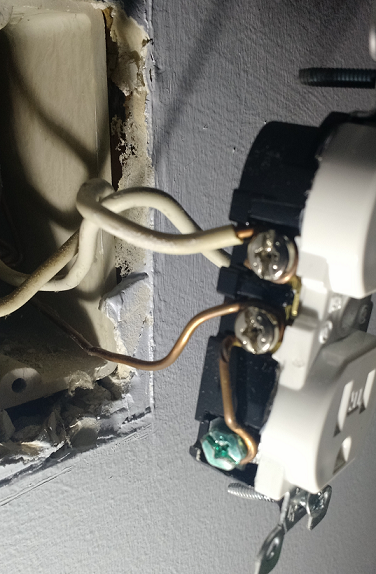 Are you sure you rewired this exactly the way you found it?
Any chance you flipped the outlet upside down in the course of swapping it (putting the two wires on the side with the fatter pin, neutral, rather than the shorter pin, hot)?

Previously, were both receptacles switched, or only one?
Did the old receptacle have the split tab broken off on either side (that bit of brass between the screws)?

One of the white wires is a switched hot, and that's fine. Today, that wire Should be marked with tape to show it's not a neutral. In the past, that was only required if it was not "obvious".

The bare wire can only be the safety ground. It cannot be used as a conductor in any way, shape or form, so that setup is illegal as heck, and needs to go. But first you need to understand what the crazy person was trying to do. The white and bare wires both attached on the neutral side could mean one of two things.

If you inadvertently flipped the outlet and that was formerly the hot side, and the tab was broken, that would mean he had split the outlet so only one socket was switched, and the other always-hot. And he was supplying those from the switch, through white (OK) and bare (NOPE). You'll have to look inside the switch to see if he did this. And if he did, undo it and make it a normal switch loop and have it switch both sockets.

If those two had previously been conncted to the neutral (taller prong) side, with the tab not broken off, that would suggest he was having problems with the neutral wire, so he bootlegged ground. Normally nothing damages a cable in a wall, so wire problems are usually at terminations -- so you may be able to fix it. If the damage is in the cable itself, take the entire cable out of service - a screw which cut neutral may have cut halfway through other conductors, or be touching hot, waiting for a child to find it.

It sounds like there are two wires coming into this box: one supplying power, one is a switch loop (going to the switch). In the switch loop the black wire is constant hot, the white is switched hot. In this case that white wire should be marked with black or red on both sides to indicate it's not a neutral but that's the least of the problems here.

Bottom line, this is incorrect, illegal and dangerous. Disconnect the ground from the neutral.

Now you need to try and determine why this was done. Almost certainly this is either a bootleg ground or an unnecessary connection.

Check if the ground is okay

After disconnecting the ground from neutral, use a multimeter to test between ground and hot. You should get 120V. If not, your ground isn't connected, and that confirms this was being used as a bootleg ground.

If the ground works (you get 120V) it indicates either another bootleg connection upstream, or that this was just completely unnecessary and done by someone who had no idea what they were doing (actually: that statement is true regardless).

The fact this was done makes me not trust any other work done, so I'd trace back and look at all other fixtures on this same circuit to check for other bootleg connections.

Basically there are two possible fixes:

It looks like the hot wire has been painted over. The problem here is the neutral. It's cross-wired to the ground. I can't think of a single good reason to do this. Just unwrap the ground from the neutral side and that should work correctly. If it still doesn't work after that, consult an electrician.

Not the answer you're looking for? Browse other questions tagged electrical wiring receptacle grounding or ask your own question.