adding an electric range/oven in house with only 100amp main service?

Well I'm doing some wiring in the kitchen before the big remodel in there and I thought I'd install a 40 or 50 amp circuit for an electric range/oven (there's a gas oven currently, but may want to upgrade to electric or even induction one day).

Then it occurred to me.. we only have 100 amp service in the house. Would adding an appliance that uses up to 50% of the max electric load be pushing it? Does this mean I either need to update the service or scrap the idea of an electric oven?

I would like to stay at 100 amp main if possible. The house has a gas furnace, three window electric A/C units on 20 amp breakers (I'm in Kansas, climate is really hot in summer and a pretty cold in winter), an electric dryer on a 30amp breaker, not a lot of lights and stuff as it's less than 1000 sq ft, there's a workshop/garage getting 20 amps IIRC (could be more, especially if I want to weld).

What do you think??

(Bonus question: do I really need #6-4 wire for the oven circuit and how do I connect this to the breaker box?)

edit: thought you guys might like to see the breaker box. (btw, I've already removed the old K&T wiring that you see going to the breaker bellow the main breaker). 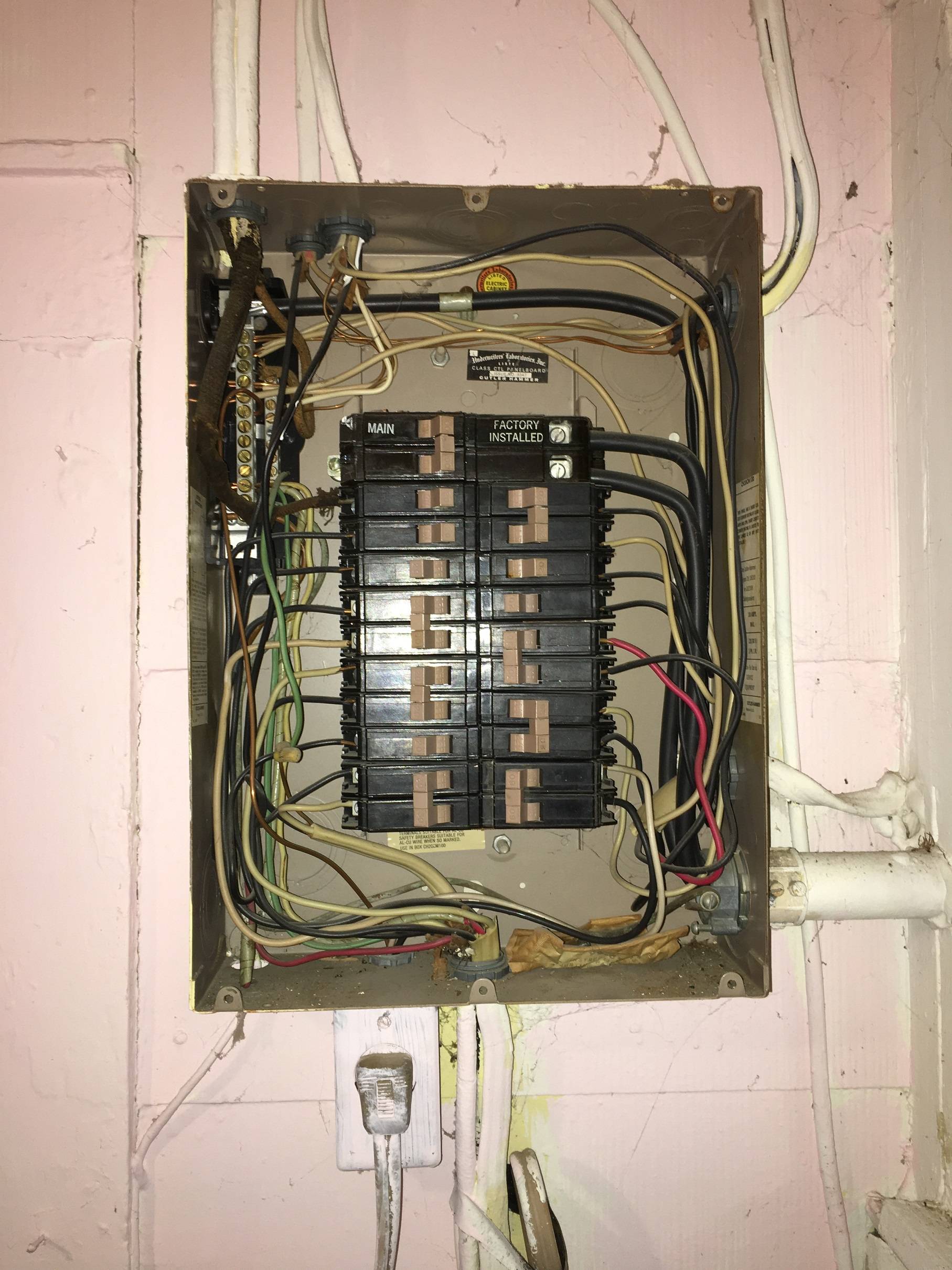 Your panel needs to be reviewed, carefully.

When you do, you'll have no trouble finding 2 spaces.

It's a quality CH panel, albeit with only 20 spaces. I'm not counting the top 2 spaces in each row, which collectively are the main breaker (100A). Good news is, with this panel arrangement, if you shut off the main breaker, everything is cold except those conspicuous large screws. Which makes it more DIY-friendly than most.

I see seven 240V breakers tying up 14 of 20 spaces. That means all 120V loads in the entire house are served by six 120V breakers, which is pretty compact. I don't believe a house can have seven 240V loads. The usual big four are dryer, A/C, water heater and oven. So I suspect many of these breakers are surplus, particularly since they're off.

The only conceivable reason for this many 240V breakers is having all-electric heat, e.g. baseboard, and if that's the case, forget about an electric range/oven - you just don't have enough service.

Two of those 240V loads are 120/240 split phase. The right side middle rows are a 30A breaker, and looks to have the heavier 10 AWG wire, so it looks to be a dryer. The left side 4th and 5th from the bottom is weird because the white wire is being used as a hot, and the red wire is taped white and used as a neutral (which is illegal to do). That's not right. It might be a multi-wire branch circuit or MWBC, serving two 120V circuits, but I doubt it.

I see a red wire that's taped off, that means there's another black-red-white cable with black and white only being used. That seems weirdly sloppy (why use white for a 240V circuit when you have red) which only worries me more about the quality of work in general.

Even worse, look at the bottom right breaker. It's a 60A breaker but that's NOT a 4 AWG wire. It's either 12 AWG or maybe 10 AWG. That needs a 20A or 30A breaker, respectively. I know exactly what those breakers cost, so no excuse! SHUT IT OFF NOW. NEVER turn it back on. Replace with a 20 or 30A breaker respectively, most hardware stores stock CH220 or CH230. And if it trips, it's supposed to.

Other than that, Mrs. Lincoln...

Go through each circuit in the panel, for two reasons. First, to find any more defects -- after all, I could find two whoppers from a photo. Second, to understand what you do have, so you can either trim or consolidate and free up 2 breaker spaces.

Don't bother hunting down double-stuff (duplex/tandem) CH breakers. Yes, they exist, but you really, really need to re-evaluate this panel, given the large number of defects I've seen from one measly photo. And I think as you do so, you'll free up some space.

You simply need a 50A breaker and 6 AWG copper (or 4 AWG aluminum). You could go 40A and 8 AWG, but the difference is only a few bucks, and you'll have a wider selection of ovens/ranges if you go 50A. CH 50A breakers are readily available, not quite as widely stocked as the 20/30s but any big-box should have them. You cannot reuse the 60A breaker.

However, cooking on electric kinda sucks, if you're coming from gas. It's a very annoying learning curve, and a lot of compromises and workarounds. Not recommended.

If you must upgrade the panel

CH is a fine system. One option is get a larger CH panel. However, if you replace the panel, you will need to upgrade most of all of your 6-8 120V loads to AFCI or GFCI or both/combo, and that could get costly. The disadvantage to CH or any 3/4" wide breaker is being smaller, there's less space to cram advanced tech, so they're more expensive or unavailable.

Don't go cheap. This panel is much better than the Homelite and other shlock the local big-box is shoveling. (You can't go by brand anymore, as good brands like Square D and Eaton have bought up cheapie sub-brands.) You have to ask for the good stuff. Get a top-shelf panel from a proper electrical supply. And go really big - bare minimum 42-space, 60-space is not too many. If the main breaker for such a panel is too large, bypass it - put a 100A breaker in the normal spaces and backfeed it (much like is occurring in this panel).

It's certainly doable, as there are plenty of (older) homes with an electric stove and 100 A service. However, given the electricity demands of modern-day living, you sacrifice in other areas. Those older homes tend to be the ones where you can't run a toaster and microwave at the same time, or a hair dryer and the light in the closet. You could also decide to run a smaller breaker, given that you have gas, and allow for an electric oven only, but not a full electric range.

The bigger problem in your situation is that your electrical panel is full; there are no more spots to put breakers. So if you do want to add a 40 or 50 A breaker for a stove, you need to get a bigger panel at the very least.

You may have service entrance cable rated for more than 100 A, in which case you can upgrade to that level of service with no problem*. If your service entrance is only 100 A, though, upgrading beyond that would entail running new cable from your meter to the transformer - which could mean 100s of feet of thick, expensive cable and possibly trenching.

Yes, you would need #6 wire for the 50 A circuit, and yes you would need 4 conductors (3+ground). When you get a bigger panel it then fits in to the 50 A breaker no problem.

*The main breaker on your panel will be the smallest rating of the following: the rating of your service entrance cable (from the transformer to your meter), your meter, the cables running between your meter and panel, and your panel. So, you could have a 100 A main breaker because the panel is only rated for 100 A, even if everything else in that chain is rated for more (say 125 A). That's the best case scenario, as it just means a new panel, which you'd need anyway. On the other hand, if it's the service entrance cable that's rated for 100 A, but everything else is rated for more, you have a big choice to make.

We (my wife and I) have a 100 amp service. The house was built before 1800, so it's gone through tube and socket to tar coated to (my work) modern wiring. We had an electrician recently change the panel from 100 amp fuses to 150 amp breakers. but the supply is still 100 amp. We run an electric stove (2 x 30 amp), hot water heater (2 x 20 amp), and dishwasher on it in addition to normal electrical lights, freezer, fridge, and outlets. No microwave or dryer! Heat is wood fired boiler and wood stoves. We have yet to have a problem. So it should be doable, but I would strongly suggest an electrician.

Not the answer you're looking for? Browse other questions tagged electrical kitchens oven range or ask your own question.

3
What amp breaker for 20 Amp electrical oven and 40 Amp electrical range on same circuit
2
What size wire should I use for a 60amp subpanel?
4
Stove and oven on same circuit?
2
Can I add a 30 amp breaker to a sub panel being fed from a 50 amp breaker
0
Adding more to 125A Main Service
2
GFCI protection for multiwire branch circuit in shipping container workshop
2
Should I make space for a new 50A breaker in a full panel or install a sub-panel?
1
New oven/range wiring
0
overloaded panel, possible load sharing
5
Replacing old plug-in 220V range with new hardwire 3-wire electric cooktop: remove outlet or add a plug?