does dryer lint come into my bathroom through the air vent?

When I moved into my townhouse we were told we must put an exhaust fan into the basement washroom. We had someone do this and since then we have had dryer lint come thru the vent.

We have also noticed that we can only heat one side of the house. Only half our vents give full heat. Could these issues be related?

It's mostly a guess based on the minimal information provided, but I doubt you're seeing dryer lint. Dust fibers from clothing and toilet tissue accumulate on exhaust fan grilles. They need to be pulled down and cleaned at least annually.

Actually, the fan blades do, too. In some cases the moisture and dust conditions are so severe that the blades get completely coated and blocked over time, such that the fan moves virtually no air.

I'd say this isn't likely. Your bathroom is an exhaust, and your dryer is an exhaust -- running one to the other wouldn't make sense.

Start by looking around the exterior of your townhouse, between 1-3 feet off the ground. Do you see a dryer exhaust like one of these? 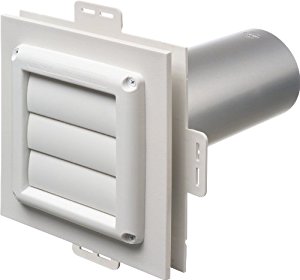 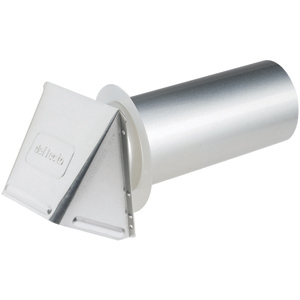 If you see one of these, then turn on your bathroom exhaust fan and go back outside. Are the louvers or damper flap open, and/or do you hear sound coming from it? If not, good. Now go start your dryer (with clothes in it, so it doesn't overheat) and go back outside. The louvers or damper flap should be open at least partially, and you should hear the characteristic dryer air sound.

Assuming you only noticed the vent in operation when either the bathroom fan or the dryer were running, then the two aren't interconnected and the lint you're seeing is normal bathroom lint (toilet paper, bath towels, bath mats, etc) collecting on the vent cover (and inside it). This happens because when you shower/bathe the room gets really humid, and some of that humidity condenses around the vent as it's getting sucked out... then as the lint is getting sucked out, it gets trapped in the condensed moisture and any other lint that has already collected there.

Not the answer you're looking for? Browse other questions tagged ventilation or ask your own question.

6
Is it better to vent a bathroom fan out the soffit, the side of the house, or the roof?
10
Is this gas range ventilation setup dangerous?
2
How can I fix this moisture problem to stop mold growing?
2
How can I add ventilation to my basement office?
1
Everything in my house vents into the ceiling cavity. Should I change this?
2
Can I vent my dryer 'up'?
0
Dryer isn't drying clothes. I've tried all of the common solutions (I think)
1
Downstairs exhaust fan venting into upstairs?
0
Do we need a gable vent, and in either case, how to vent bathroom fan outside (can it be via the gable)?