My outdoor tap seized up and wouldn't close. It was gushing water. I bought a new one and replaced it. It's a cheap one from Bunnings (link, but male instead of female), screwed on to the pipe with plumbing tape in the thread. 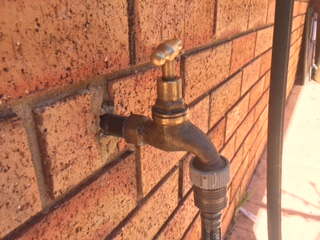 The house was built around 1996. The water source is metropolitan mains water (Melbourne, Australia) which is reliable. It's only this tap in the house that fails.

What could be causing this? What can I do to fix this permanently?

First try to grease the stem by opening the valve to max opening and smearing grease on the stem. Use special plumber's grease.

If that doesn't work, turn off the water and remove the service opening and and advance the stem all the way through the packing and apply plumber's grease to the stem where it seals against the packing. It may be necessary to apply a small amount of grease to the coarse threads inside the valve which advance and withdraw the stem, but I'm not sure about that. When putting it back in be sure to have the valve opened sufficiently so that the rubber seal is not pressed against the seat.

Test for gunk in the water:  place a clean empty container (bucket, cookware, barrel) under the faucet and fill it up. Let the water settle for a few minutes and look and for any kind of particle, most likely on the bottom, but also floating to the top. Sometimes a little gentle stirring will make it easier to see by moving the particles in the same direction.

A common problem include aging galvanized pipe which sheds small particles of zinc and/or iron:  sometimes as flakes but also as pins. Those can get in bad places and make the valve seat/washer require hard turning to be shut completely off. A hard turning stem will wear the stem seal faster than usual.

You don't give an age of plumbing or water source (well?) but this is a possible cause.

Not the answer you're looking for? Browse other questions tagged leak outdoor taps stuck or ask your own question.

6
Can I oil a squeaking tap?
2
What's the most cost effective solution for repairing a slab leak?
2
Leaking tap after seat recutting
2
How to remove the cap/plate/cover off this tap
0
remove old brass tap
0
Help with Grohe tap
1
Shower valve washer on hot needs replacing constantly