So, just to be sure I thought I would ask before I go and really screw something up. I have these light fixtures that I want to replace.

The original light fixture support two light bulbs, each socket rating maxes out at 60W and it appears to have two separate wirings going to each socket. (see attached picture) 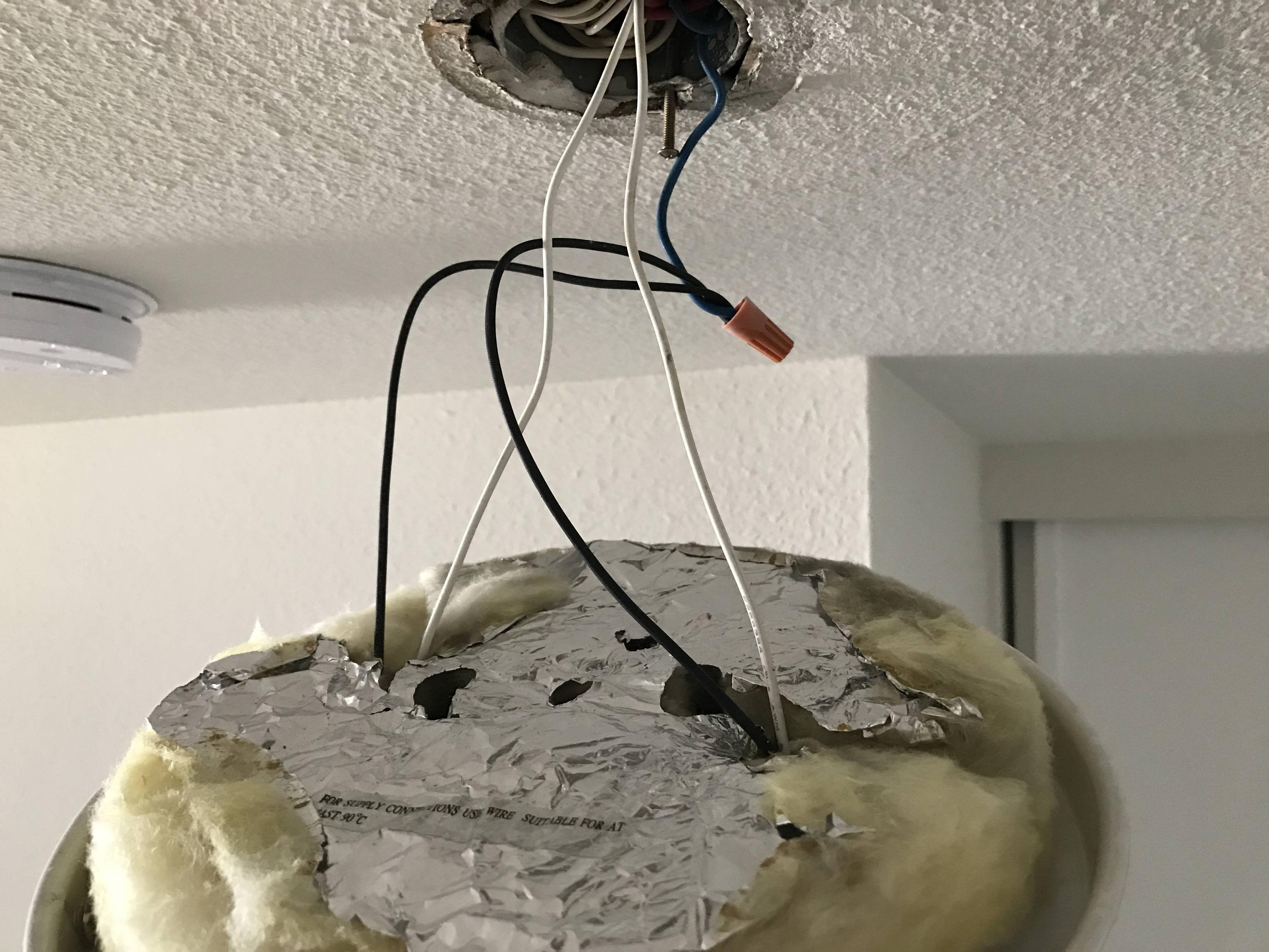 The fixture I want to replace it with has two light bulb sockets, but appears to only have one set of wiring. 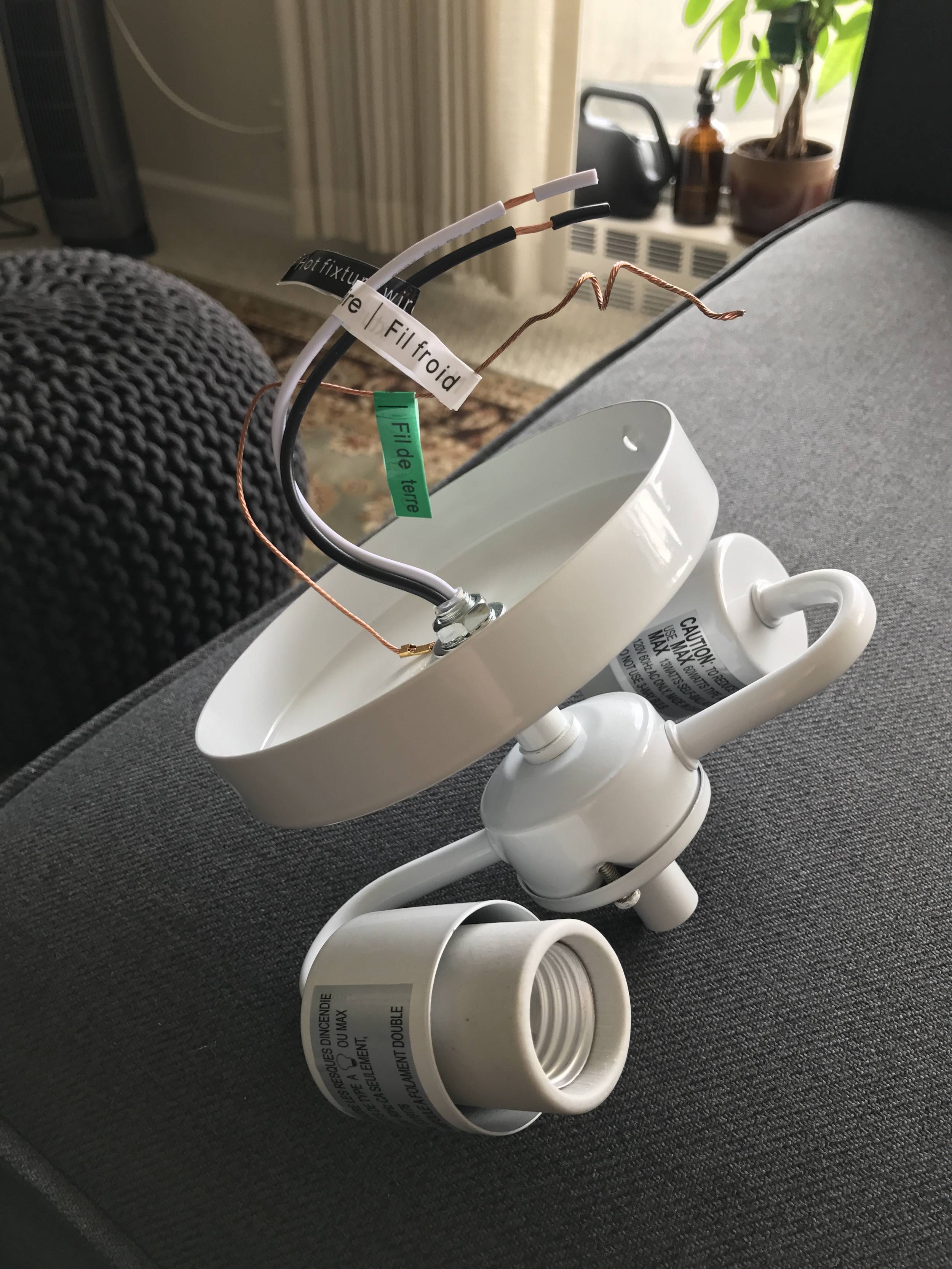 My question is: is it safe to put two 60W lightbulbs on only one set of this wiring? And if it is, how do I ensure the second (live wire) that won't be used is safe from causing any problems?

If there are any more details needed to answer this question, please ask!

The old fixture has 2 hots, one going to each lamp socket. They both go to the same place - a single "hot" supply wire. That's where your new fixture's "hot" goes.

You'll probably see something similar with the neutrals. You might see 2 neutrals coming in from the ceiling and joining the 2 from the old lamp. If so, join those two and the one from the lamp.

The wires look ample for what the lamp is listed for -- 60 watt incandescents. The reason for the restrictions is fire from the heat of those bulbs overheating the fixture. So any bulb which consumes more than 60 actual watts is improper. As far as CFLs, the fixture won't overheat from a hypothetical 60-watt-actual CFL (which would be bright), but I think they are trying to tell you the "bulb" would fail prematurely because the fixture is too confined for it too cool properly. (among other things CFLs are designed to run base-down not sideways). And this is a guess by the fixture manufacturer.

Since the year is 2017, I assume you'd use LEDs. They don't cool as well as CFLs, but have better heat sinks and much better efficiency in lumens per watt. You can also get directional LEDs which only light one "side" of the "bulb", so in a fixture like this you're not wasting energy lighting the top of the fixture. So there's no problem getting plenty of light - for instance two 13W's directionals would be 3000 lumens of well-aimed light, that's as much as two 48" fluorescent tubes (rather quite a lot, and probably more than you want).

You were wise to take a "before" picture. Many people fail to do this and wind up lost.

See the wire nut in the picture? Twist it off and the two black wires on the old fixture stay with the old fixture. You are left with one hot wire coming out of the ceiling box. This is to be attached with a wire nut to the one black on the new fixture.

3
How to wire two light bulb sockets inside a ceiling fixture?
2
Can I replace a single light switch with a 3-way switch that can individually control 2 lights in a fixture?
0
Can I install 72W A19 halogen into a 60W-looking socket?
3
Can you install an LED floodlight in a regular ceiling fan?
16
Why won't a LED bulb work in a standard light fixture?
0
LED & fluorescent bulbs blinking in a fixture - but I don't think it's the bulb. Advice?
0
Can I install lower-rated fixture sockets to meet the rated current threshold for dimmer switches?
5
Wiring in a new light fixture and switch to existing switches?
2
Is it safe to mix and match light bulb wattages and sizes in same fixture?
2
LED bulb on outdoor light fixture blinking