What could be causing the washing machine waste pipe to overflow?

I'm the opposite of knowledgeable when it comes to plumbing however I have done a fair amount of searching through forums to find an answer to my problem and unfortunately still have questions.

To make it easier, I have taken a picture of the pipes as well as the actual waste hose behind my machine.

The hose from the machine sits in what I believe is called the standpipe on the left and goes approximately half a foot down. 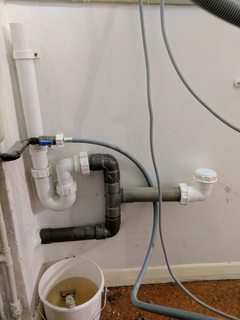 I have taken apart the p bend (or u bend - still don't know the difference) and confirmed that there is no blockage.

I have run a snake down and around all the pipes with no issues and also used some soda crystals just incase but water flows through the pipes easily.

What I believe is the issue is that the output from the machine is producing water faster than it can travel through the pipes which are 40mm in diameter.

I believe that if I removed the p bend and just replaced it with a 90° corner, it would work fine but obviously it's there for a reason and particularly with the pipes only a 6 feet from the drain, I'm very reluctant to do that.

One more thing to point out is that on the right hand side, there is a pipe which I have capped off. I was wondering if that trapped air could be preventing the water flowing down as quickly and if I need to find some kind of air valve which may allow air out?

As it stands, I have just put the waste hose into the sink next to the machine and that has let me at least use it for now. 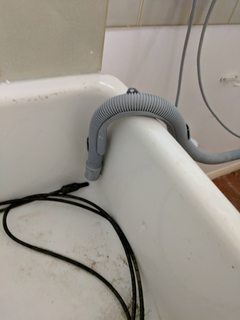 The first thing to do, is to figure out how this drain is vented. If you've got a big slug of water from the washer moving through the pipe, you've got to equalize the pressure in front of and behind the water. So you'll want to make sure the drain is properly vented.

Next, I'd probably remove all that extra plumbing. With three 90° bends like that, you're making it more difficult for the water to move through the pipes.

Cut out the extra plumbing, and connect the trap assembly directly to the trap arm. Cut the plumbing at the orange line in the image below, then connect the trap and standpipe to the newly cut pipe. This eliminates all the extra bends, and should allow the water to drain better. 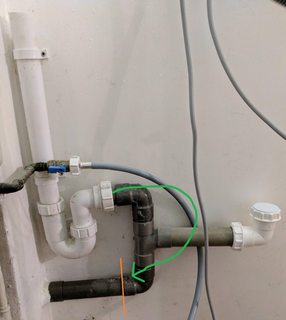 I'd also install a shallower P-trap. The shallower trap will hold less water, and allow better flow. As it's currently plumbed, you've got probably about 4-5" of water sitting in the trap. 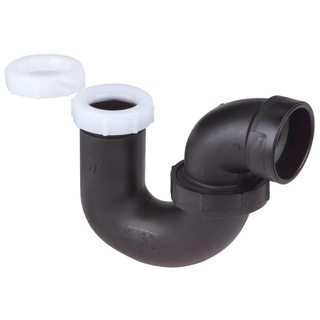 Lastly, you may be able to make the standpipe longer. Check your local codes for the maximum length, as some say maximum 30", while others allow up to 42" pipes. (the standpipe is the vertical pipe coming up out of the trap). A longer standpipe obviously holds more water before overflowing, so it can provide a bit of extra time for the water to drain.

I suspect that capped off pipe to the right used to be the vent. Take off that cap and extend it up a few feet and see how it drains. The vent should go to the outside of the building. Unless there's another vent behind the wall to the left that we're not seeing.

What is the size of the copper pipe the white plastic pipe attaches to. It should be at least 1-1/2" but looks smaller. I do however, prefer to pipe a washer drain in 2" pipe to be able to handle the washing machine's drain water since the water is pumped out of the washer.

Not the answer you're looking for? Browse other questions tagged washing-machine washer or ask your own question.