Can someone help me make sense of the wiring for these switches?

I'm trying to replace 3 light switches with new ones. Normally this is straight forward, but when I took the plate off, I was stumped. (Disclaimer: I'm not an electrician, I'm a recently divorced single woman who can't afford to hire one, and I'm just trying to do whatever I can to spruce up this old heap of a house I just bought.)

The left switch (L) is a single pole switch that used to control a ceiling fan, but now it controls a chandelier. There seems to be 2 wires connected to each screw on this one (one looped around the screw and one in the quickconnect hole). One of the wires comes off the switch on the right.

The center switch (C) is a 3 pole switch that controls two recessed lights. This one looks pretty straight forward.

The right switch (R) is a single pole switch that controls two recessed lights. One of the wires on this switch loops around and then continues on to the L switch, but I'm not sure why.

None of these old switches have a green ground screw. There are no white wires going to any of them. But when I look back in the box, there are lots of copper and white bundles. I can't tell where they go. Are any of these switches grounded?

I was gifted some Levitron 3 way switches and was told that even for the single pole switches, a 3 way can be used with no problem. I was able to replace C without any issue because it was a 3 way switch already, but it also didn't have multiple wires going to the same screw. But I can't figure out how to make L and R work. Also, the wiring I have seems too thick to use the quick connect holes in these new switches.

This house was built in 82 or 83, I think, but the original owner had some work done (converted garage to a room, then added another garage, etc). I have no idea if these 3 switches are original. 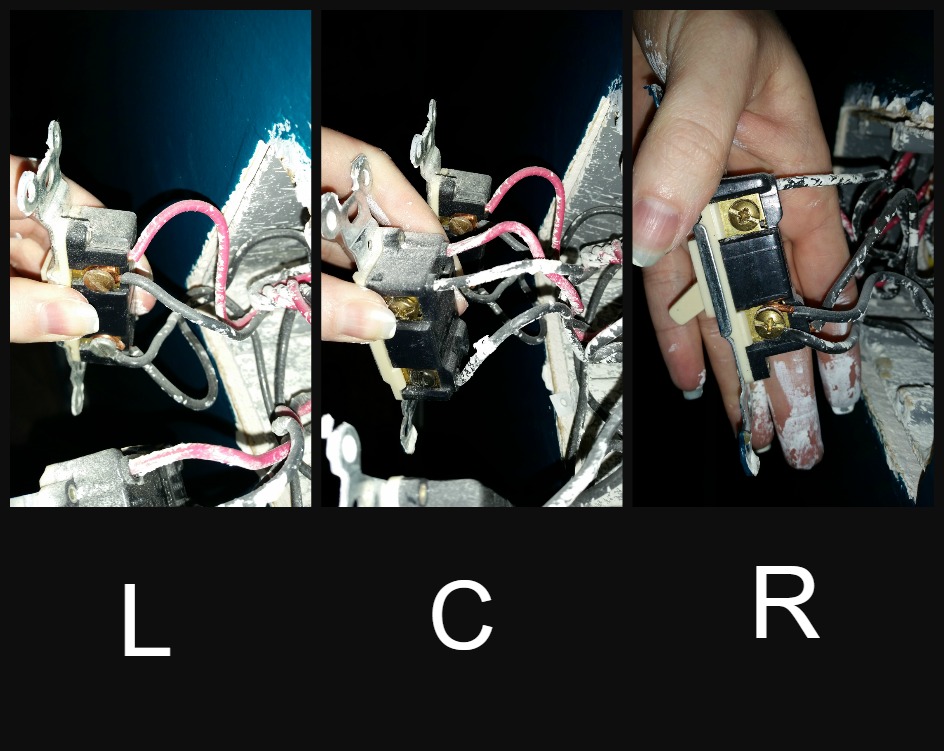 First off -- using a 3 way to sub for a single pole is probably Code, but not the greatest idea

Electrically speaking, there's nothing wrong with using a 3-way (SPDT) switch to substitute for a standard (SPST) switch provided it's wired correctly (or else it simply won't work at all). However, it can be quite confusing to folks who are expecting the switch to have ON/OFF labeling.

The copper bundles should be ground, but whoever wired these switches fails at grounding

You'll need to use bare (or green, although bare pigtails are easier to get in some ways) pigtails from the green ground screws on your new switches to the bundle of bare wires in the back in order to ground them as per 404.9(B) of the NEC, as whoever wired the original switches forgot to put them in, and the plastic box that was used clearly doesn't do anything to provide your switches with a ground-fault current path.

Finally, it's better to pigtail multiple wires together to a single wire that goes to a terminal instead of using the backstab terminals, especially on cheap builder-grade switches as builder-grade backstabs are pretty bad at hanging onto wires. This is doubly necessary in your case, as it appears that the wiring in your box is 12AWG, which the backstabs on your new switches won't accept.

As to why that one wire was sent to two switches? It's the incoming hot feed for both the left and right switches in the box.

Finally, if you need a supply of wire for pigtails, some THHN/THWN dual rated wire will always work. (Random wire might not meet Code by way of not being a type of wire found in NEC 310.104.)

2
Need help wiring switches with several wires
3
How can I install Z-Wave switches in these different situations?
5
How do I replace a single pole light switch with a programmable timer switch?
1
Jumped light switch wiring
1
Wiring question for replacement of two switches in one box
3
TWO ORIGINAL SWITCHES - ONE three-way and one single cant figure out wiring for SAFE UPGRADE
1
Could someone check this wiring diagram for outlets/switch?