How to hang a baby cradle from a concrete ceiling?

I am considering buying a baby cradle that will hang from the ceiling. We have a concrete ceiling in the apartment and I am not sure that it will be possible to install it safely. It needs to be able to support 35-40 pounds of weight, max.

The cradle comes with a hook, but I am not sure if it will hold. 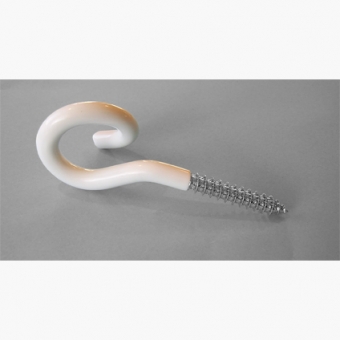 Concrete is a great building material because it has very high "compressive strength"; it resists being crushed, and so can support a very heavy load placed on top of it.

However, it has very poor "tensile strength" and "shear strength"; it can be "pulled apart" relatively easily. This means that hanging stuff from underneath usually doesn't work very well, because the hanging load will "pull" on the concrete. While the relatively light weight of something like this would not normally be a concern, the fact that you'll be putting something very precious and delicate in it makes me very wary.

If you want to try it anyway, forget the hook that came with the cradle; it's for screwing into a wood support member like a ceiling joist or beam, and will not work at all in concrete. You will first need to drill a hole in the concrete. This will require a concrete drilling bit (probably several of them; concrete is not easy to drill through and will dull bits very quickly) and possibly a hammer drill if it's treated or hardened concrete.

Then, you will want to install a concrete anchor. These anchors are designed to "crush" as you screw a bolt into them, expanding a part of their frame into and against the concrete to lock it in place. Here's one that should work for you:

Its 5,000-lb rated load may be a bit of overkill, but you don't want this to fail, EVER, so go for broke. You can even use some construction adhesive or epoxy to further "seat" the anchor in the hole.

Then, after any adhesive or epoxy you put in has had time to set and cure, you just hook the cradle to the D-bolt on the anchor (this may require an S-hook, climbing carabiner or threaded quick-link) and you're done.

Not the answer you're looking for? Browse other questions tagged concrete hanging or ask your own question.

6
How do I hang a chair from a concrete ceiling using a single hook?
0
Few questions about concrete/cement wall inside of the apartment and which screws to use
0
How can I hang small weights from a drywall ceiling in a way that's minimally destructive?
2
How to hang a projector screen from a thin horizontal part of slightly curved ceiling
3
How to Hang Projector Screen from ceiling against wall?
1
Drilling into outdoor stucco to hang bike
0
How do I attach a wooden post to existing concrete steps?
0
Hanging ceiling hooks from concrete beams above drywall ceiling
3
How to hang from ceiling when stud finder isn't working