In my garage, I have an outlet on the ceiling powering the garage door opener. It has black and white wires coming to the socket, and no ground that I can see.

I've run some conduit along the ceiling over to a workbench area, where I want to install a few outlets at bench-level and some ceiling lights controlled by a switch. I know I need to use a GFCI for the outlets, at least. I have two questions about how to run the wiring:

I've made some diagrams to work through the choices! Is there anything I'm missing?

The power comes in the lower left side. In this option, everything is on the load side of the GFCI, and the outlets are wired in parallel. 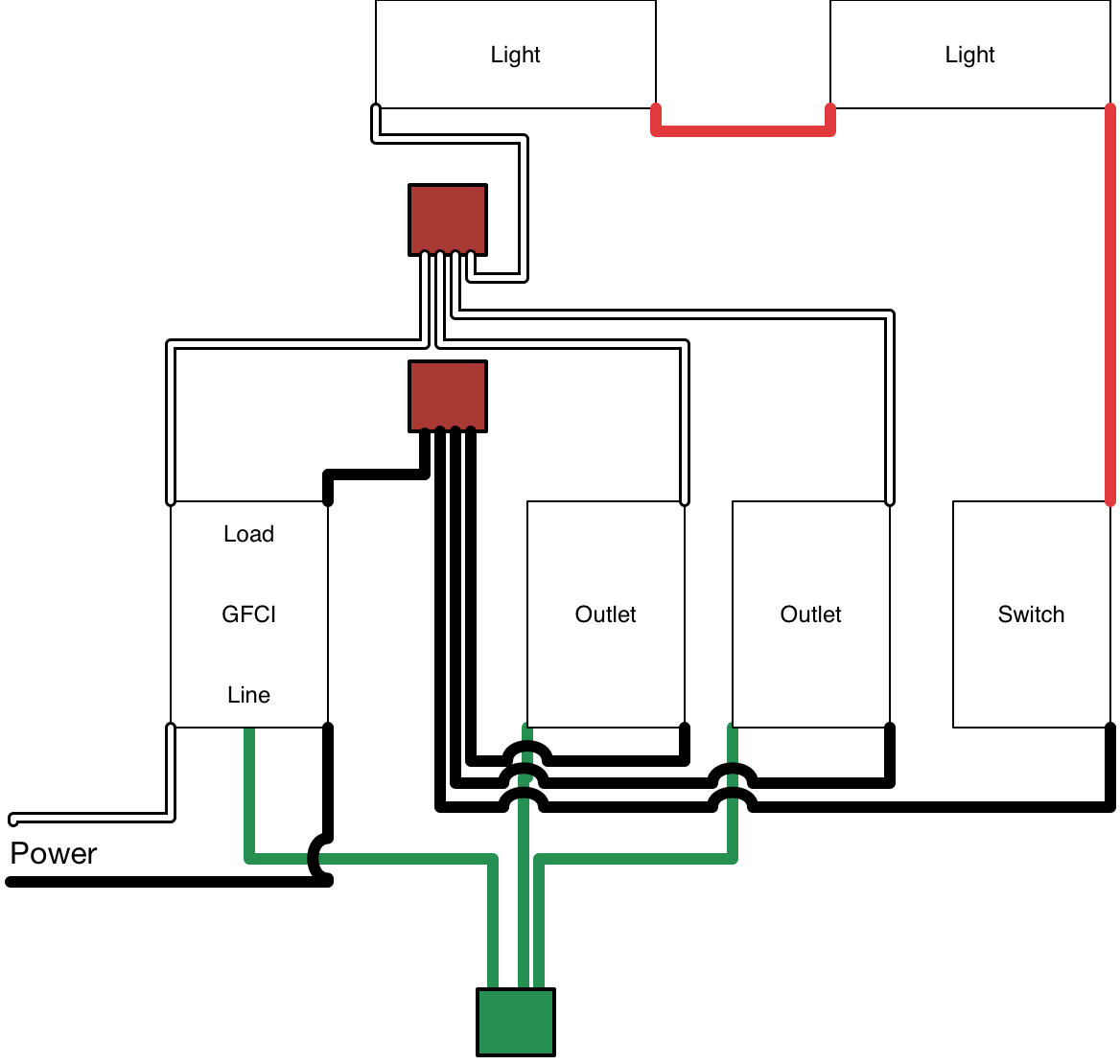 Lights before GFCI, Outlets in series

This is much simpler. This should prevent the lights from going dark if the GFCI trips, correct? Are there any drawbacks? 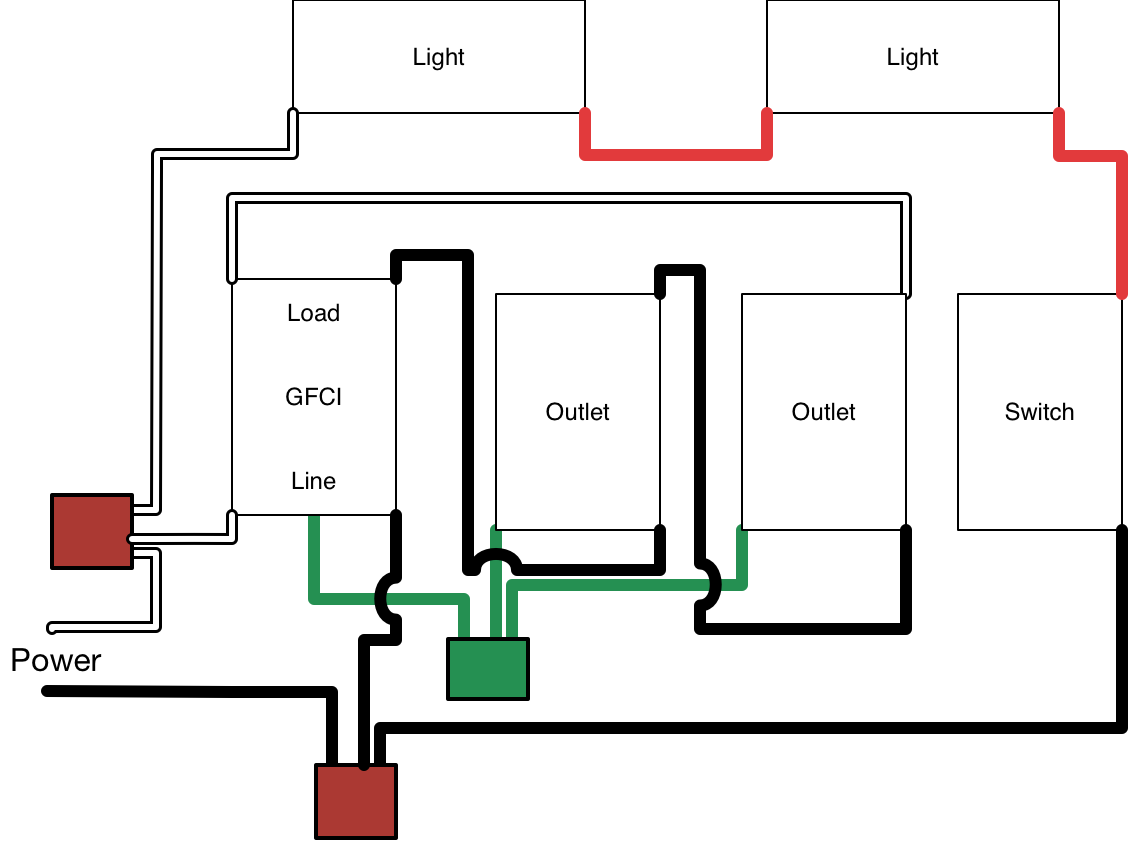 Your first diagram is almost correct. The receptacles need to be wired in parallel, but so do the lights. The lights can be GFCI protected, but they're likely not required to be (unless they're in a shower in your garage). 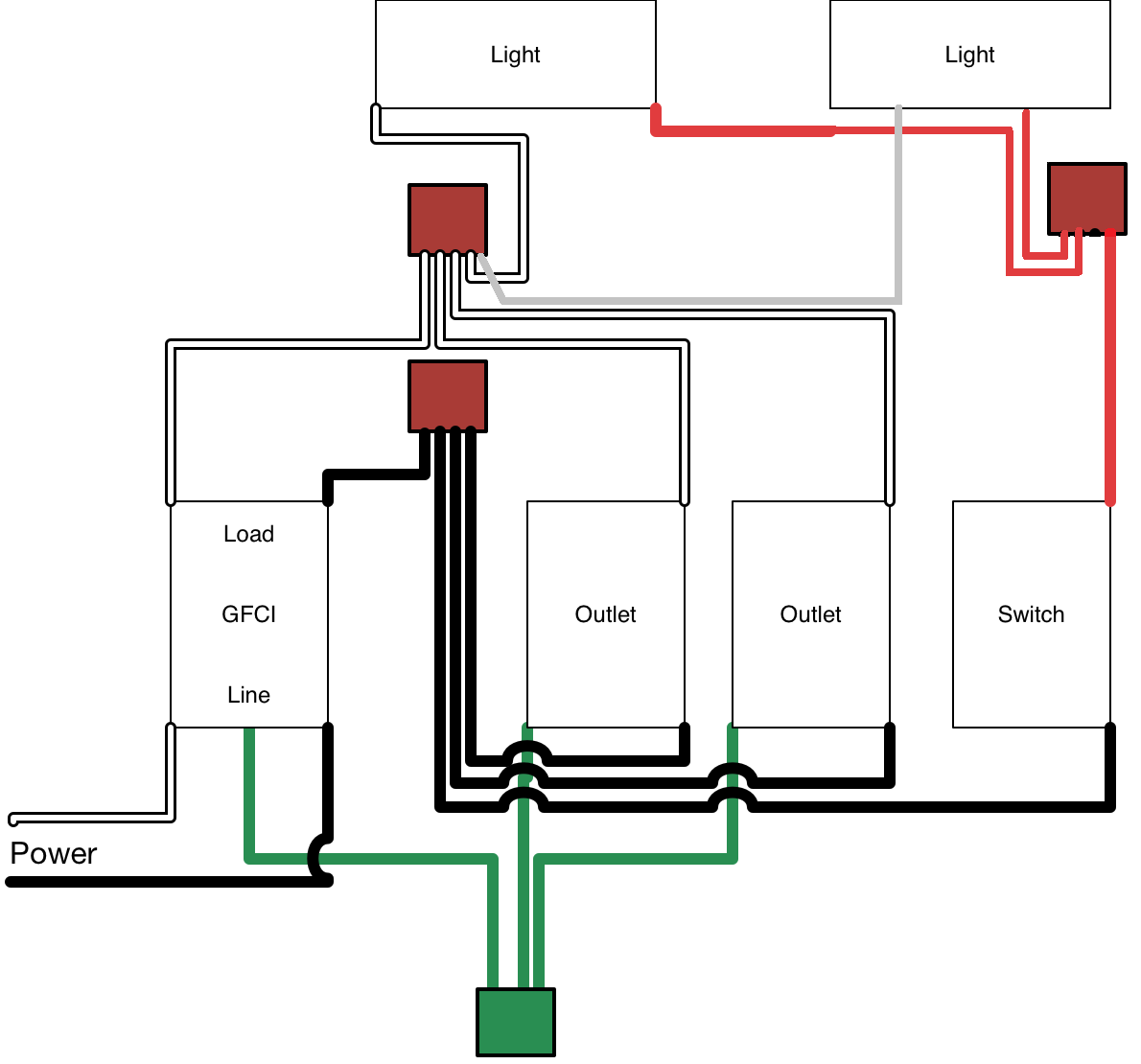 You also need a neutral at the switch, even in you don't use it. So it might look more like this. 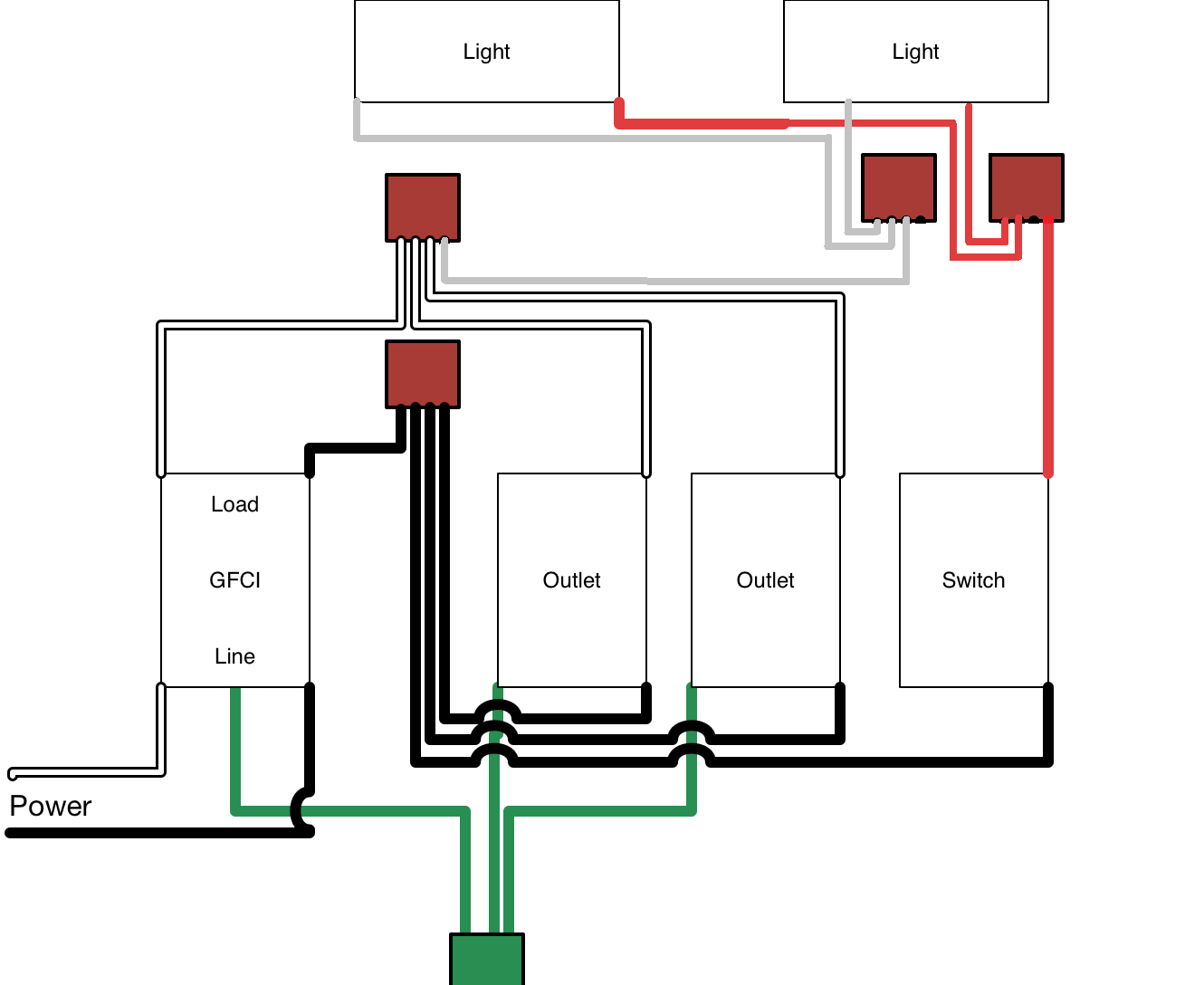 That said, I think I know what I'm doing, but use this advice at your own risk. I would recommend you don't wire lights after the GFCI, unless the bulbs will be outside and potentially exposed to the weather. That's what you describe in your second diagram, but there are some problems with it:

Since I don't feel like making a drawing, I'll explain in terms of electrical nets. IOW, for each net below, there should be a connection between each device listed after the net's name (and wire color).

If your lightbulbs will be outdoors and you do want to protect them from ground faults, then the wire to the switch box (both line and neutral) should come from the Load side of the GFCI, rather than directly from the panel (or the GFCI's Line side). You can physically wire it from the GFCI box, or from either of the outlet boxes, whichever is closest to your switch box.

There may be other code requirements in your area that a local electrician can help you with. Eg., use 12AWG for 20A breakers, or 14AWG for 15A, and staple the romex wires to the stud close to the box they run into. Leave about 10-12" of wire hanging out when roughing things in, and strip the tips as specified in the wire nut packaging, or the QuickWire push-in hole guides. Use wire nuts rated for the number and gauge of wires each will connect. Don't burn your house down. :)

Not the answer you're looking for? Browse other questions tagged electrical switch gfci or ask your own question.

10
How should I address my bathroom's flickering lights and GFCI tripping mysteriously? (Schematic included.)
19
How do I properly wire GFCI outlets in parallel?
6
How should I wire a GFCI outlet and a switch to isolate the switch but provide GFCI protection further in the series?
3
How would I go about adding more receptacles to a garage?
0
Switched outlet keeps tripping breaker
3
Is it safe and within code (1970 US) to permanently wire a 20' cord to a garage door opener?
2
GFCI/AFCI Trips With No Load And New Wire
3
Can I add a non-GFCI receptacle in the garage for a freezer?
0
Why install a hidden GFCI outlet controlling sink outlets, ceiling lights, vent fan, and floor heater?
0
Duplex outlets in series AND parallel after GFCI