First, let me preface this by saying this is entirely theoretical. I don't plan to install anything myself, and I'll contract a licensed electrician to do any of this work, so please don't feel the need to post warnings, disclaimers, or otherwise explain the dangers of mains electricity.

Given that, I have learned that my utility company provides 240V to the meter at my house. There is a breaker box immediately downstream of the meter, and it services 100A at 120V (so it becomes split-phase at some point). After a bit of conduit, I have my current breaker panel, with its circuits going off into the house.

I want to have three total breaker panels, one for each Phase 1 and 2, and 240V, but there is also that 100A breaker immediately following the meter to deal with.

My question is, what is the best way (schematically) to install 300A (I can get up to 320 from the meter without an upgrade) of breaker to protect all three circuits?

My current thought is that I would need a 300A breaker on the Phase 1 hot wire and a 300A on the Phase 2 hot wire. Is this correct, or is there a simpler/better way to arrange this?

This is not 2-phase, it is split-phase. Think through how that works. 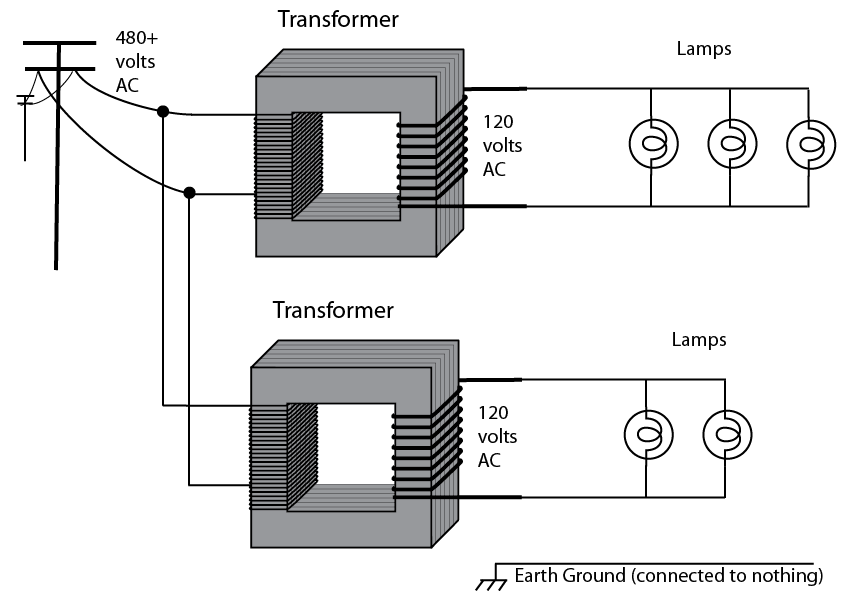 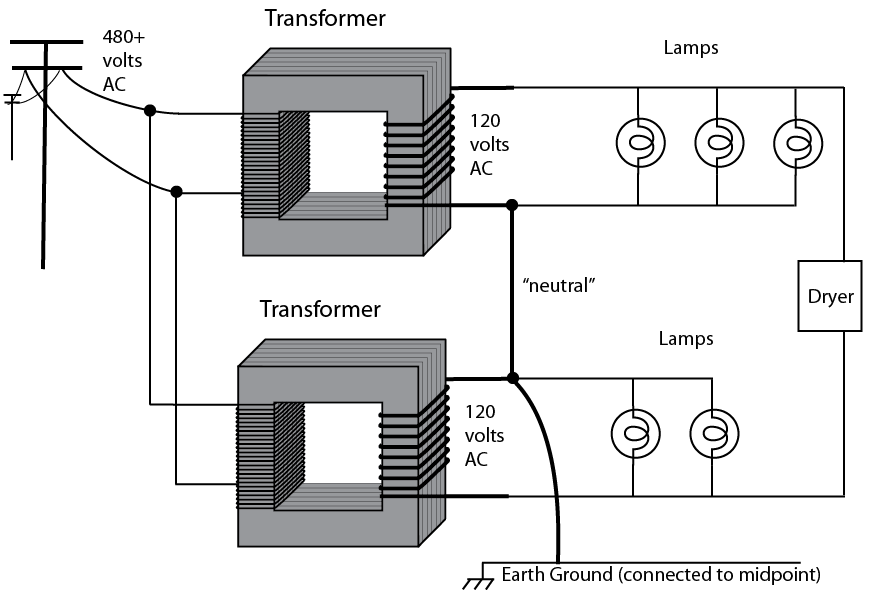 What's the capacity of these together? Still the same 200A@120V, obviously, since all we've done is bridge them. But what's its capacity @240V?

Now here's the 100-amp question. Do these capacities share or stack? Or does one take away from the other? If the upper transformer is supplying 120V at 70 amps, how much 240V can it also supply without exceeding limits of the transformer?

Now in practice, those two transformers are constructed on a single frame. But they are indeed separate secondaries, just like the diagram shows. They can be wired with the secondaries in parallel, in which case 200A@120V is what you get.

And, in practice, you'll notice that in the following drawing, the transformer is up on a pole and shared by several houses. The only way they'll sell it to you is 240/120 split-phase.

Mind you, this is exactly what you asked for, not what would be commonly done. Because of that choice, you wouldn't be able to support MWBCs or split-phase appliances (NEMA 10 or 14) out of the sub-panels. That may not matter if you don't have any split-phase loads, e.g. split-phase appliances are not sold in the Philippines since half the island has Euro style 240-only power. There may be other reasons for wanting to do this, e.g. putting whole-panel GFCI or AFCI on the sub-panel, sub-metering for tenants, a central shut-off for all electric heaters, switching part of household load onto a small generator or 120V solar, etc.

Right off the bat, the power company's pole line from transformer to meter must be able to handle 300A, and that's not what they usually install, because they're not in the business of filling the sky with useless aluminum, and pulling another power drop is not that expensive for the rare customer who needs it.

Depending on your panel, upgrading to 300A is not as simple as swapping your main breaker for a 300A one. Very few service panels are listed for 300A. The chance of you having one is remote.

Typically, in this case, power companies feed two main panels from a single meter, and so you could slap a common 200A or 225A panel right next to your existing 100A panel without having to rewire it. However in that case you would not be able to feed 300A to each of three subpanels.

Getting split-phase out of the above

As drawn, you can't get split-phase out of any of the sub-panels because they are not 120/240 panels. That would require a fourth feed wire.

In that case, you'd either feed the split-phase load out of the main panel, or add the fourth wire and reconfigure any of the panels to 120/240 service. As a practical thing they probably started as 120/240 panels anyway, since straight 120 or straight 240 panels are rare.

0
How can this panel pull 100A without any breakers tripping?
2
Hybrid 1ph/3ph load center fed by rotary phase converter?
1
Chinese Breaker Box (240v split-phase?) Lacks Neutral Wires and Grounding Bus
1
Why might a double-pole breaker have the same phase on each wire lug?
1
Single phase 120v to split phase 120v (240)
1
Getting 120v single phase & 240v three phase out of 240v single phase receptical
0
Max wattage on 120v outlet on 20A 80% breaker on 3 phase
1
Ganged Circuit Breaker has strange ganging configuration. 40-[30-30]-40
7
Electrical service sizing mix up in Mexico
1
Can you run a 240v US split phase welder on 230v UK single phase