Building a table with outlets

My couch is covering both the outlets on the wall in my living room. I found a great idea on Pinterest to solve my problem, and I am looking to modify it a bit. See pictures: 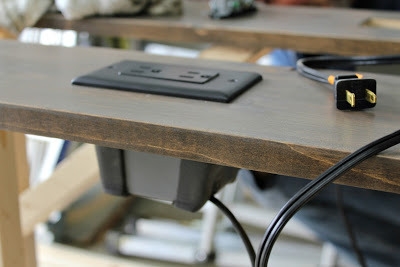 The blog on which this was originally posted is no longer up, but the basic premise was to cut an extension cord and strip and expose the wires; I would certainly do this with a grounded extension cord.

I would like to use this idea and put 2 outlets on top of the table and an outlet at each end of the table, daisy chaining them together. I am thinking should put a GFCI outlet at the beginning of the circuit.

So my questions: Is 4 outlets too much to plug into a single outlet? Are there any other considerations I am not thinking of?

That blog certainly should have taken down; terrible, dangerous work. First, obviously, providing grounded NEMA 5-15 receptacles when the plug is 1-15. (a water-protected GFCI would eliminate the electrocution hazard at least.) Also the cord is too light, and there's not proper strain relief.

Imagine you plug two 1500W (12.5 amp) heaters into a 20A circuit. That's 25A and the wires will slowly overheat. The circuit breaker, internally, will also slowly overheat. After 5-15 minutes, the breaker will trip. This will happen before the wires get dangerously hot -- assuming they are the correct 12 AWG wires!

Trick is, there's an idiom within the Electrical Code that a 15 amp receptacle can be on either a 15A or 20A circuit breaker. You aim to put a NEMA 5-15 plug on the furniture. That means it could be plugged into a 20A circuit. You aim to provide multiple NEMA 5-15 receptacles. So the user (you can't count on this being you) - could plug two 1500W heaters, as above. Or he could plug in two 1200W (10A) loads and the breaker would not trip -- and your cordage needs to handle that!

That means your cordage will need to be 12 AWG, as well as any internal wiring within the furniture. You can use stapled Romex, or THHN running within plastic or metal conduit. The conduit would be more professional IMO.

The blog example doesn't have a cordage problem, but just for reference, here's what you can't do: use Romex or loose wires. You need special multi-conductor cable called cordage which is sold at electrical supply houses, with or without a NEMA 5-15 connector cast into the end. As he did, you can lop an extension cord (presuming it is listed to be cordage; one would expect!)

Cordage doesn't seem special when half your appliances have cords. But it really is special.

Strain relief is another thing you take for granted because every appliance has it. But it's very important to prevent chafing or cutting damage from the cord being pulled on.

You can see where the blogger is using a cheapie plastic residential junction box. Those boxes aren't strong enough to provide proper strain relief, and are not designed for it. (when I say "cheapie" I mean in construction, not in cost.) A much better choice -- at least, for the first box where the cordage goes in -- is an all-steel stamped box. It has proper knockouts which can accept quality strain reliefs.

I also agree with Ecnerwal's comment that because of the flat horizontal receptacles, the furniture itself should incorporate GFCI protection. It's likely to be plugged into a living room which will have, at most, AFCI protection. AFCI protects against arcs, not electrocutions.

If you have face-up outlets, they should be fed off the LOAD side of a GFCI which is not itself a face-up outlet. A tripped GFCI still has hot parts inside it, and if the GFCI outlet itself gets soaked wet, its protection is not sufficient.

You might want to try an easier and safer option. Just use a power strip and fasten it to the underside of the table. Your powerstrip will certainly provides overload protection and, depending on model, potentially surge protection to protect any electronic devices you may wish to plug in.

Instead of using an outlet in an unsafe orientation, I would use a pop up outlet. 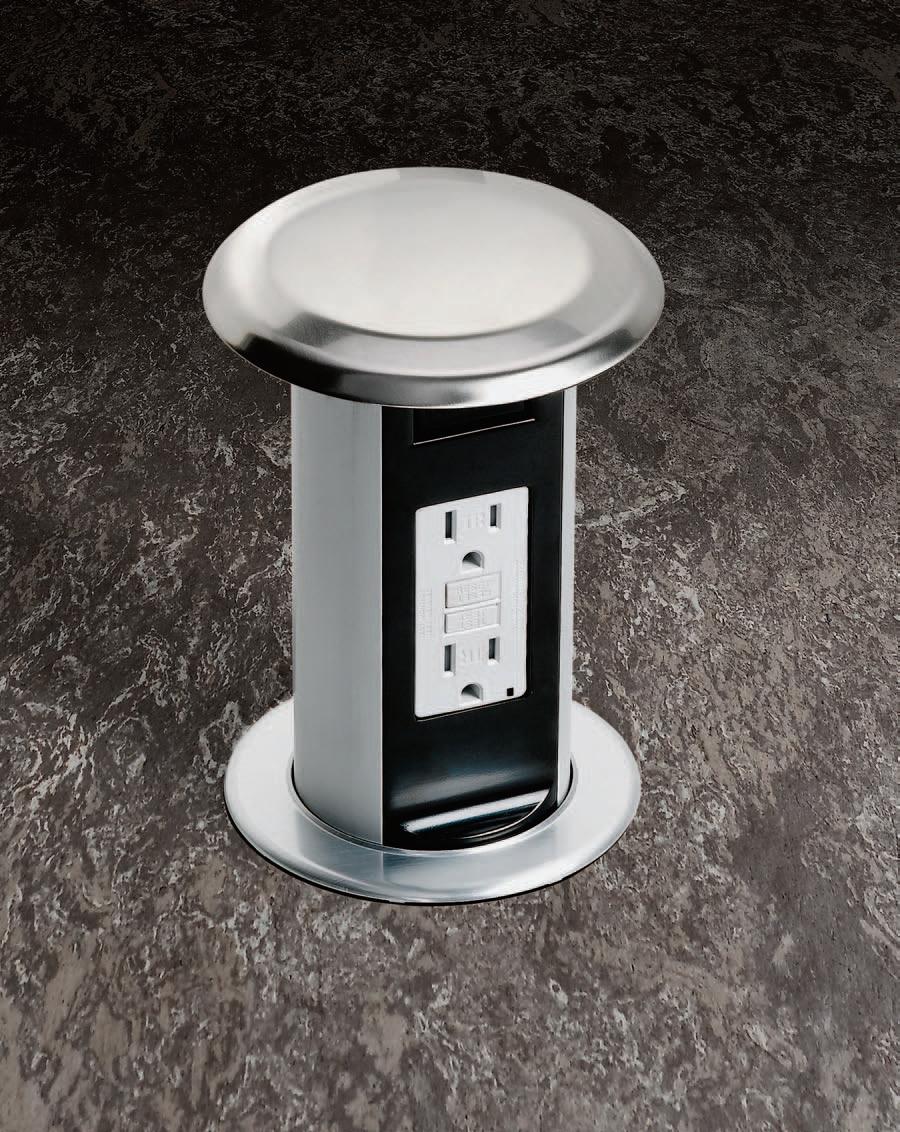 I'd also follow the wiring guidance in Harper's answer.

Not the answer you're looking for? Browse other questions tagged electrical receptacle furniture or ask your own question.

8
Can I plug a workbench mounted double gang outlet into a single gang wall outlet?
5
Three dead power outlets, no tripped breakers
3
How can I extend a circuit so I can plug in my under cabinet lighting?
4
How would I go about adding more receptacles to a garage?
0
Extension cord out of electric box for toilet seat bidet
0
Are there drawbacks to installing GFCI outlets in sequence?
0
Replaced breaker, and still no power to outlets, but at circuit test 110
20
Does unblocking power bar outlets through short extension cords increase fire risk?
2
Extension Cords - Electrical Hazards & Safety
2
The plug for my laptop is slowly changing colour, is it still safe to use until I get a new one?