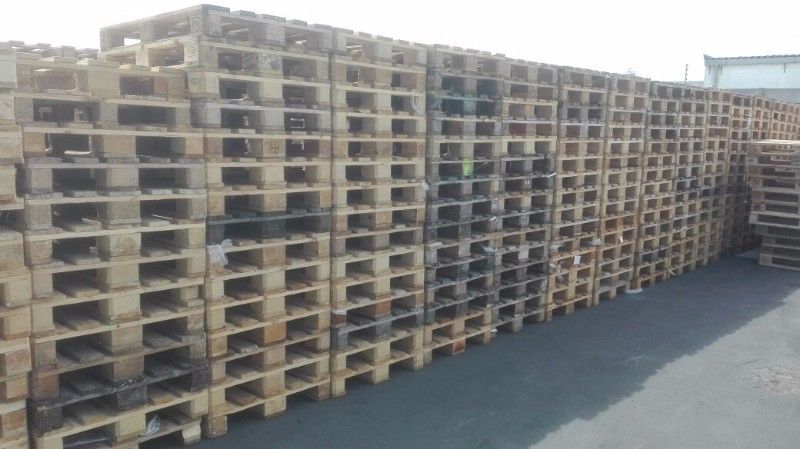 I want to create exactly this with top shelf 2m high: 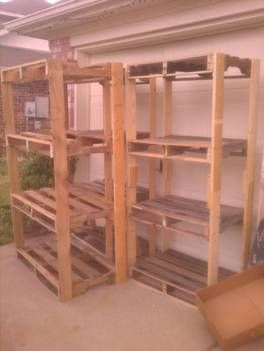 I am extremely illiterate when it comes to DIY but I have a drill and know how to drill pilot holes and screws.

Those racks appear to have been constructed by simply attaching legs to halved pallets. You'll need a way to cut the pallet rails, which appear to be fairly heavy hardwood.

Once that's done, it's a matter of running 3" (75mm) gold construction screws through 2x4" (35mm by 70mm or 40mm by 90mm, maybe--whatever standard metric size is available in that range) lumber.

Pine will work. Looks like they used 1"x2" boards for the uprights; I'm not sure what the metric dimensional-lumber equivalent would be.

For strongest connection, the screw length should be just a bit shorter than the combined thickness of the two boards the screw goes through. As @Isherwood stated, construction screws will have the greatest shear strength, wallboard screws are weakest (They're really intended only for supporting plasterboard, and engineered for the minimal strength needed for that task.)

You want at least two screws per connection point, to prevent racking (twisting). I would suggest three, in a triangle, for better strength in that direction. Make the spacing between the three as large as the overlapping area will permit, for the same reason. If you plan to put especially heavy load on these shelves, another screw won't hurt.

You may find that you want to add diagonal bracing pieces across the sides or back to further resist racking, but you can make that decision later.

Not the answer you're looking for? Browse other questions tagged garage shelving or ask your own question.

5
What are the proper materials and method to hang heavy-duty shelves in a garage for storage?
1
Floating workbench
0
Power Miter Saw, Hand Miter Saw, or Jig Saw?
2
How to mount a floating shelf on ridged ceramic tile
31
How do I make around-the-room shelves for a seriously skewed room?
0
Can I use slot shelving in a wooden shed?
7
Prevent sagging shelves in alcove
2
How might I attach pieces of lumber between two garage ceiling joists for the larger goal of mounting a punching bag to the lumber?