I'm replacing my outlets and I have too many hot/neutral wires, what do I do?

I'm going through my new home and replacing my outlets. This was mostly fine, as the first outlet was very easy to replace. But, I ran into outlets that have multiple hot/neutral wires.

For the most part, I just copied how the old outlets were setup by plugging in the wires into the holes in the back and the "extra" ones screwing onto the side screws, and this worked fine (I hope). The problem I ran into is I wanted to replace some of my outlets with the newer USB/Outlet combinations, which only have one set of screws (and one pinhole in the back). Basically, I don't know what to do here; I don't think it's smart to put multiple hot/neutral on the same screw. 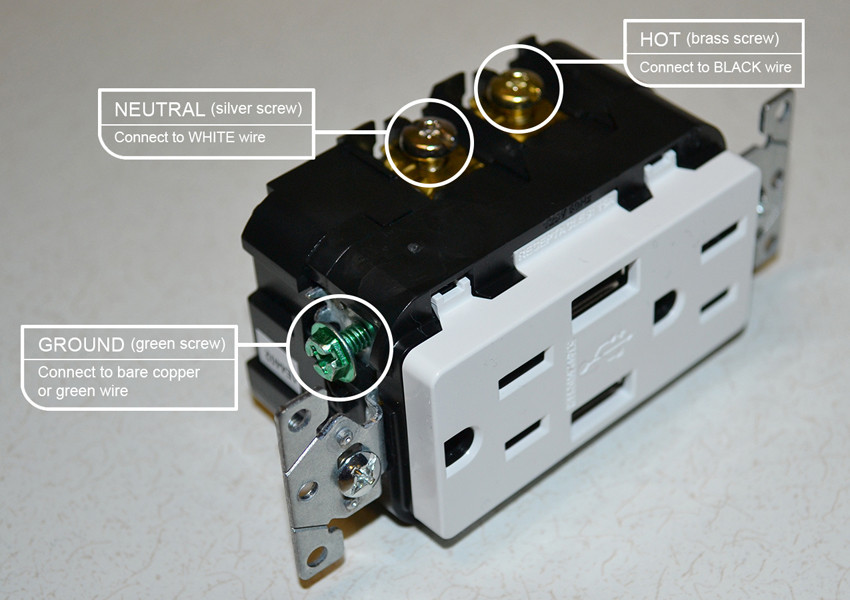 Your photo appears to be a USA type device. If you are in the USA , the applicable code is based on the USA National Electrical Code (NEC). There may be local exceptions and additions, but there are usually not many. That and the NEC guide book are often available in public libraries. I believe putting two wires on one screw as suggested by @Tom_Carpenter is not allowed by NEC. Also NEC required any connection to be inside junction boxes that can be opened for inspection. Nothing like that is allowed to be hidden inside a wall.

State and local codes specify who is allowed to install or modify wiring, what permits are required for each job etc. You can get away without following codes, but you could run into trouble when you go to sell your house.

Also, ring wiring as shown by @Tom_Carpenter is not done in the USA.

Circuits are usually in strings of junction boxes, daisy chained. They can fork, too, and in that case you'll have 3-4 cables needing to be spliced.

If you're finding places where the backstabs AND the screws were used, you're looking at shoddy workmanship. Generally you're only allowed to use backstabs OR screws. That only allows 2 connections on a common socket. (4 on the better ones).

In any case, if you have more wires than screws, use a pigtail. Put a 6" section of wire on hot and neutral on the socket, then wire-nut it to the other relevant wires. (but the illustration shows orange wire-nut, but yellow or red would be better.) 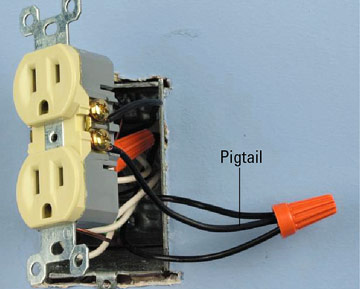 In fact, many electricians dislike backstabs. They don't grab well. They're single-use: prying out the wire and reusing the hole makes them weaker. Heavy loading heats them, which weakens the spring. They're not even legal for grounds. What do you expect with 4 backstabs in a 60-cent socket?

Use side screws, or up-spend on the $4-tier "screw-and-clamp" sockets. Those allow up to 2 wires per screw, or 4 wires per side.

Above (below?), Tom describes ring circuits which are a UK idiom. Don't hook up branch circuits like that anywhere else, least of all North America!

The reason for multiple hot/neutral wires for one outlet is that the outlets are daisy-chained together. This means hot/neutral is only coming from one of the wires and it is being sent to the other wire. This saves on the amount of wire needed since nearby outlets can be daisy-chained instead of requiring wires from the circuit breaker to each outlet.

Take a look at the general schematic for wiring outlets below. You can see that each outlet is wired in parallel like I said. In addition, the point where the first and second outlet connect, that is where you would screw both hot/neutral wires to the screw.

Only one wire actually contains the hot/neutral power (the one coming from the circuit breaker), while the other one is meant to pass along the power to the next outlet.

Install pigtails if there is more than one cable in the box. Using a scrap of the same type of circuit cable, cut 6-inch lengths of each type of wire in the cable and strip 3/4 inch of insulation from each end of the wire.

Join the bare copper (or green insulated) ground wire to the ground wires in the circuit cables using a wire connector, following the manufacturer's directions. Do the same with the white (neutral) wires, then the black (hot) wires, so you have one ground, one white, and one black pigtail.

Note: If the electrical box is metal, install an additional grounding pigtail and connect it to the ground screw on the box, as described in the next step. The outlet will have its own separate grounding pigtail.

How to Wire and Install an Outlet

1
Neutral 14 ga wires hot
0
How do I replace electrical outlets that have two wires under same screw?
22
Replacing 2-prong outlets in basement - existing wiring has two hot wires, one neutral?
1
I'm replacing an old outlet. Why are all 4 wires are hot?
4
120V on hot and neutral wires… just started happening
1
Why does my outlet have two white wires on the neutral side and one "neutral" wire is hot?
0
Still reading open neutral after restoring power to lights and outlets