I have 3 outdoor light fixtures controlled by a simple single pole switch in my garage. They had old incandescent light bulbs in them.

I replaced one with a CFL bulb and it worked fine - until the next morning when it would not go "off" even though daylight had come.

At first I thought the light fixture sensor was broken, but then I realized it was due to the bulb.

Is it true that CFL bulbs will not work well for this application?

Do LED bulbs have this same issue?

If I get dimmable bulbs will that solve it?

What is the suggested solution?

A perfect photo-control has 3 functioning wires: Always-hot (black), neutral (white), and "switched-hot" (red). The photo-control powers itself 24x7 via the black and white wires. It switches power to the lamp via the red wire.

Incandescent bulbs have an interesting property: when they're not burning, they have very low resistance, and will flow current freely (this is called "inrush current"), That means if you're designing a photo-control, it's possible to skip the neutral wire, and have the photo-control power itself by leaking power through the bulb when it's off. This won't have any effect on an incandescent bulb. This is a 2-wire photo-control.

A raw fluorescent bulb is infinite resistance until the lamp strikes its arc. LEDs are high resistance until they light. (this is also true of any arc discharge light, including LPS, HPS, mercury, MH, or neon). All need a special control circuit to keep current from being excessive. These control circuits may, or may not play well with 2-wire photo-controls, and may be designed specifically to do so.

The same issue exists with dimmers, so "dimmable" can help.

Another option is to rewire your fixture to use a 3-wire type.

The types of photo control 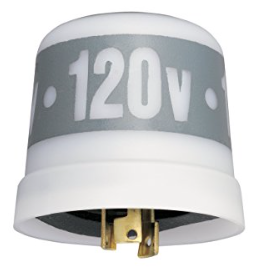 This "puck type" is a replaceable photo control which sits typically on top of the light. It's commonly found on street lights, HPS, mercury or MH barn lights, and their LED replacements. They are universally 3-wire. The socket rotates, and the detector window should be aimed to the north. 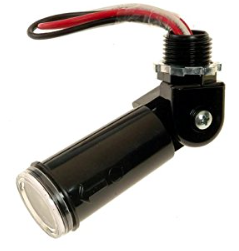 If you look at most of the consumer grade photo-lights, you'll see a component that looks like this. This is a "stalk type" photo-control, and they are commodity items. It is replaceable, in the sense that it can be unscrewed from the fixture and replaced. They thread into a 1/2" trade size hole widely used in electrical boxes. These are available in 2-wire or 3-wire.

So if your fixtures have this type of 2-wire photo-detector, you can pull down the unit, unscrew the old sensor, and screw in a 3-wire type. Wire black to supply, red to the lamp's hot, and white with the lamp neutrals.

You can put the sensor anywhere

Nothing says you need the photo-sensor to be at the lamp. Since the stalk-type can screw into any 1/2" knockout, such as that on the side of a junction box... you can install it where convenient - as long as it has a good view of an area whose lighting changes dramatically day to night. For instance, you could install it in an electrical box inside near a window.

Modern photo sensors have a memory, and "Learn" the day-vs-night brightness in their location, over several days and nights. I've installed a sensor on a north-side porch, so sheltered I needed a flashlight to work. I wasn't surprised when the sensor turned the lights on in broad daylight. However, by the second day, it had "gotten the rhythm" of what "light" and "dark" is in that location, and it worked properly. What does this mean?

They also make motion sensors in the "stalk" format. So you could potentially alter the lamp to be a motion sensor instead of dusk-to-dawn.

7
Why shouldn't different types of bulbs be used in the same fixture?
3
Why are my recessed IC lights overheating?
1
LED Bulbs into Pre-existing Light Fixtures
2
How do I know what LED bulbs are safe to use in fixtures that are part of construction?
2
Does "Suitable for use in open fixtures" mean not suitable for closed?
0
Certain light bulbs not working in fixture
0
Light with Dimmer and LED bulbs blinks when on by itself
6
Is there a difference between incandescent and LED bulbs in terms of a fixtures' "max wattage"?